I've read about EERIE TALES in a number of books, but it wasn't until recently that I was able to see it. Tim Lucas' Video Watchblog alerted me to the fact that a version of the movie is on YouTube, with English subtitles. This version runs about 97 minutes.

The film was produced, directed, and co-written by Richard Oswald, and it is the forerunner of the many anthology horror features that would be made decades later, such as DEAD OF NIGHT and THE HOUSE THAT DRIPPED BLOOD.

Like those other titles, EERIE TALES has a linking story which introduces all five episodes. After closing time in a bookshop, the figures in three paintings leave their frames and browse through the various tomes. The figures are the Devil (Reinhold Schunzel), Death (Conrad Veidt), and a woman referred to as "The Flirt" (Anita Berber). The first tale is "The Phenomenon", by Anselma Heine. A man (Veidt) saves a young wife (Berber) from her maniacal husband (Schunzel). Veidt and Berber go off together to a hotel, but when Veidt awakens the next day, the woman has disappeared, and the hotel staff deny any existence of her.

This story would be used several times in the future, notably in the British film SO LONG AT THE FAIR and many episodes of numerous TV series. Reinhold Schunzel makes the biggest impression as the mad husband--he gives off a Peter Lorre-type vibe, even though it would be years before Lorre would appear in a film. 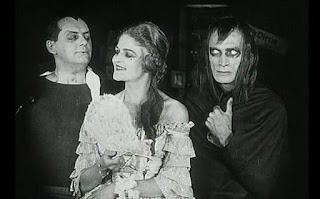 The second tale is called "The Hand", by Robert Liebmann. In this one Veidt and Schunzel once again vie for the attentions of Berber, who is a cabaret dancer here. Schunzel kills Veidt, but soon starts to see the man's ghost everywhere. Eventually the "hand" of Veidt takes its revenge.

This entry has some very expressionistic acting by the performers, plenty of creepy closeups of Veidt, and it gives Berber a chance to display her dancing talents.

The third story is an adaptation of Edgar Allan Poe's "The Black Cat". While in a cafe a man (Veidt) overhears that a drunken lout's (Schunzel) wife (Berber) is quite attractive. Veidt takes the drunk home and experiences the lout's repulsive behavior and the wife's charm. After Veidt leaves the drunk flies into a rage and kills his wife. After Veidt learns of the wife's disappearance he goes with the police to the drunk's house, but nothing seems to be amiss--until the woman's beloved black cat reveals what has happened.

What's striking about this version of "The Black Cat" is that it's very similar to the adaptation of the story by writer Richard Matheson and director Roger Corman in the 1962 TALES OF TERROR, particularly in the aspect of the love triangle. Because this is a silent film, we of course cannot hear the cat's cries behind the wall constructed to hide the wife's body--the cat is shown clawing a hole out of it instead.

The fourth tale is "The Suicide Club" by Robert Louis Stevenson. A man (Schunzel) stumbles upon an old house, where a bizarre club holds forth. The club's saturnine leader (Veidt) allows the man to join in the festivities, much to his regret.

Veidt is at his creepiest here in the fourth story, which is enlivened by the set design for the club's secret room and the twist ending.

The fifth and climatic story, "The Spook", is a disappointment. In the 18th Century, the wife (Berber) of an aristocrat (Veidt) is annoyed by the fact that her husband doesn't spend enough time with her. A man (Schunzel) who has been injured in a nearby carriage accident stays at the aristocrat's house, and starts to flirt with the wife. The aristocrat engages in some trickery to make his guest think supernatural happenings are afoot.

Overall, EERIE TALES has more historic than entertainment value. It's shot in a very flat, ordinary manner, and it's nowhere near as atmospheric as the famed German Expressionist films that would follow in its wake. I do have to point out that the version of the movie I watched on YouTube had a very soft picture quality, and it was hard to make out much background detail. I'm sure the film would look much more effective in a restored print.

As expected, Conrad Veidt makes a major impression in all his roles. His tortured physicality is amazing, and he seems even more emaciated here than he did in THE CABINET OF DR. CALIGARI (which he starred in after EERIE TALES). Veidt is truly a sight to see in the linking story, where his Death resembles a cross between a ghoul and the lead singer of a heavy metal-Goth rock group. Reinhold Schunzel (who would much later wind up in Hollywood as part of the supporting cast of Hitchcock's NOTORIOUS) more than holds his own against Veidt. Anita Berber doesn't get to chew the scenery as much as her male co-stars, but she's alluring as the cabaret dancer in "The Hand" segment. Before EERIE TALES even starts, the audience is visually introduced to actors Veidt and Schunzel, along with Richard Oswald. For some reason Berber does not appear in this prologue.

EERIE TALES is important for setting the template for all the anthology horror films to follow. (Richard Oswald would do a  sound semi-remake, with the same title, in 1932--I haven't seen that one yet.) What hurts this movie is that the five tales--and the linking story--lack the time and story information to make any one of them truly outstanding. A company like Kino or Flicker Alley needs to release a properly restored version of the silent EERIE TALES on home video, with extras that give background info on the production.