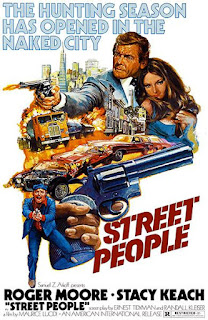 STREET PEOPLE isn't a film detailing the problems of the homeless....it's a Italian production from 1976 dealing with the Sicilian mob and stolen drugs. What makes it notable are its two English-speaking stars--Roger Moore and Stacy Keach.

A Sicilian-born mob boss, now based in San Francisco, has a giant crucifix shipped from his hometown church to America, supposedly for the benefit of immigrant dock workers. Over a million dollars worth of illegal drugs has been hidden in the cross, and the stuff has been stolen by the three men assigned to protect it. The mob boss assigns his nephew, the half-Italian-half-English Ulisse (Roger Moore) to track down the thieves. Ulisse happens to be his uncle's lawyer, and he's also a fixer for the "Organization" that the uncle is part of. Ulisse calls in an old friend, a professional race car driver named Charlie (Stacy Keach) to help him on the case. The pair cut a violent swath through San Francisco to get to the drugs and find out who is behind it all.

While watching STREET PEOPLE one can't help but feel that Roger Moore somehow wandered onto the set of the wrong production. It's hard to figure out why, in the middle of his run as James Bond, he chose to be in a R-rated, hard-edged Eurocrime movie. The fact that his character looks and acts just like....Roger Moore, is explained by it being stated that Ulisse had an English father, and he had an English education. It's a good try, but having Moore in this story is the equivalent of casting Abe Vigoda in an episode of DOWNTON ABBEY.

Stacy Keach does a bit better in his role as Charlie, although one wonders why a hot-shot race car driver does special work for the mob (maybe he's a lousy hot-shot race car driver??) Keach also provides the film's humor, even though most of it comes off as silly and out-of-place. Charlie's profession allows for plenty of car chases along with plenty of gunplay. The action scenes are handled well, even if they don't have the slickness of big-budget Hollywood features.

Despite being mostly set in San Francisco, STREET PEOPLE is a thoroughly Italian production, with Moore and Keach being the only major English-speaking actors listed in the cast. The version of this film I saw has an English soundtrack, and the dubbing is mediocre at times (most of the male characters sound almost alike). At times the story is hard to follow--the running time of the cut I viewed was around 92 minutes, and IMDB lists longer edits. I assume that there's a longer European version of the movie out there that might clear up some of the plot points.

Then again, a longer cut of the film might be even more confusing. There's two different directors listed in the credits (Maurizio Lucidi and William Garroni), and eight different writers (including Ernest Tidyman). Eurocult expert Troy Howarth informed me that Roger Moore stated he didn't even understand what type of movie he was working on.

STREET PEOPLE tries hard to be a violent crime story (it's no coincidence that it was released in the U.S. by American-International Pictures). It doesn't present a "tourist" look at San Francisco--the city is presented here as grungy and grimy. (One wonders if S.F. was picked as a location in an effort to try to remind viewers of such films as DIRTY HARRY and BULLITT.) It does have a decent music score by Luis Bacalov, and some Sergio Leone-style flashbacks that examine the past of Ulisse and his Uncle. But none of the characters are very appealing, and most of the situations feel contrived. If anything, STREET PEOPLE proves that Roger Moore didn't belong in Clint Eastwood-Charles Bronson-Don Siegel territory.