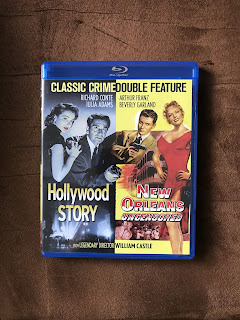 The other film on the Mill Creek "Classic Crime Double Feature" Blu-ray is NEW ORLEANS UNCENSORED, a 1955 Columbia film produced by Sam Katzman and directed by William Castle.

Former Navy man Dan Corbett (Arthur Franz) arrives in New Orleans looking to purchase a military surplus boat in order to start his own business. To earn money for it, Corbett starts working on the local docks, where he finds out that corruption means more than honest effort. Dan becomes friendly with his foreman Joe (William Henry). The foreman is killed on the orders of a crime boss (Michael Ansara) who is the real power on the docks. Dan decides to join up with the city authorities to root out the gangsters, at the risk of his life.

NEW ORLEANS UNCENSORED starts out with narration stating how important the city's port is, along with a recommendation of the story by a Louisiana senator, and a text thanking various officials for their cooperation. It's fairly obvious those behind the movie didn't want to tick off anyone in New Orleans so they could film there--a few real-life city bigwigs, including a labor leader, have roles as themselves in the picture.

Despite all the official a-okays, the movie still tries to act as if it's a hard-hitting expose of the Big Easy....which it really isn't. There's a couple of dock brawls (in which the participants spend most of the time stumbling and fumbling about), and the murder of Joe the foreman is brutal for the time--he gets multiple slugs in the back. Michael Ansara is a quite effective villain, with Mike Mazurki as one of his main goons. But one has to wonder--if New Orleans is really on the up and up as all the real-life officials attest, how was Ansara able to build up such a criminal organization over the years?

Whenever I see Arthur Franz, I think about all the science fiction movies he was in during the 1950s. Even as a good guy Franz seemed to have a pensive quality about him, and he uses it well here. Franz's character impresses the men at the docks with his fighting prowess, but it must be said that the actor throws some very awkward punches here (even though he had already played a boxer in ABBOTT & COSTELLO MEET THE INVISIBLE MAN).

Beverly Garland does her usual fine job as Joe's wife, who becomes close to Dan. Her natural manner gives life to the good girl role. The "bad girl" role (even though she isn't that bad) is filled by Helene Stanton, who plays Ansara's moll.

What makes NEW ORLEANS UNCENSORED stand out is the use of actual locations throughout the city, including (of course) the French Quarter. It gives the story a much more refreshing look than the usual studio backlot sets that would normally be used for such a production. The city locations also breathe some life into William Castle's directorial style.

NEW ORLEANS UNCENSORED is in black & white, and it is presented in a 1.85:1 aspect ratio. There are no extras.

I wouldn't call either of the films in this Mill Creek "Classic Crime Double Feature" great, but they are decent endeavors with notable performers in each. Both movies also prove that William Castle could handle a "regular" screen story.