THE FLESH AND THE FIENDS On Blu-ray From Kino 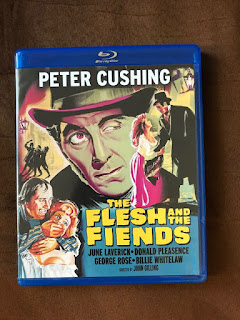 There have been many filmed adaptations of the historical events concerning the notorious murderers Burke & Hare, but the best by far is the 1959 British film THE FLESH AND THE FIENDS. The movie was produced by Robert Baker and Monty Berman (who also did the cinematography), and co-written and directed by John Gilling. It was re-released several times in the 1960s under different titles such as THE FIENDISH GHOULS and MANIA. Kino's new  Region A Blu-ray of the film features two different versions of it.

In 1828 Edinburgh, the brilliant and acerbic Dr. Robert Knox (Peter Cushing) is the head of a medical academy, where corpses to be used for study are in short supply. Knox has no qualms in dealing with grave robbers, and soon he starts to be supplied by a couple of seedy characters named Burke (George Rose) and Hare (Donald Pleasence). The duo skip digging up graves altogether by murdering lower class folk from the squalid part of the town. Burke & Hare's greed and capacity for violence gets the best of them, and Knox becomes implicated in their crimes. The haughty doctor is forced to reexamine his attitudes about his profession and humanity in general.

THE FLESH AND THE FIENDS is a black & white film, with no supernatural elements whatsoever. Yet it is far more disturbing than the color shockers made by Hammer during the same period. The story isn't set in a Gothic fairyland, and it deals with people that actually existed and incidents that actually happened. The hardscrabble, poverty-stricken dark alcoves of Old Edinburgh are expertly realized by art director John Elphick and Monty Berman's stark photography. The entire production has a grim and gruesome tone to it. The various killings are not stylized, or staged to seem exciting--the taking of life here is presented as messy, vulgar, and pathetic.

Peter Cushing is, as expected, excellent as Dr. Knox. It's simple to put Knox in the same category with Cushing's Baron Frankenstein--but the men are quite different. Cushing's Knox is a stuffy, almost prissy fellow, who seems more interested in talking about surgery than doing it. One can't imagine this Knox wiping blood on his frock coat, the way Cushing's Baron would. (Cushing's Baron would also rather go out and get his own corpses than deal with people like Burke & Hare). Unlike the Baron, Knox is still able to be affected by the consequences of what has happened around him.

Despite the greatness of Cushing, I must state that he still winds up getting upstaged by Donald Pleasence as William Hare. Pleasence's sardonic cruelty, low-class cleverness, and unnerving smirk make his Hare become one of the most memorable characterizations in English Gothic cinema. He's ably supported by George Rose as the brutal simpleton Burke. Burke & Hare in this film are basically the equivalent of modern American rednecks.

John Gilling would later work for Hammer Films in the mid-1960s, but THE FLESH AND THE FIENDS is his best overall horror film. There's an underlying sense of depravity in this picture, along with a very dark and understated tinge of humor.

Kino's Blu-ray of THE FLESH AND THE FIENDS presents a 95 minute "Continental" version of the film, which has a few nude scenes. The overall quality of this version is inconsistent at times, with parts of the film looking softer and brighter than others. It is in its original 2.35:1 aspect ratio.

The disc also includes an American version of the film, released later in the 1960s, with the title THE FIENDISH GHOULS. This cut is only 74 minutes long, with no nudity. This version does Peter Cushing no favors...much of his role has been edited out, and it doesn't even include Dr. Knox's change of attitude at the climax. The 74 minute cut does I think have better overall visual quality than the longer version.

Other than some trailers, the main extra on the Blu-ray is a new audio commentary (on the longer cut) by Tim Lucas. He starts out by admitting that the movie actually made him sick when he first saw it on TV as a youngster. Lucas believes the film fits into the category of film noir, and he compares it with Ken Russell's THE DEVILS.

There's plenty of public domain versions of THE FLESH AND THE FIENDS out there (usually carrying one of the film's alternate titles). The Kino Blu-ray is the one to get, due to the longer, more complete cut and the Lucas commentary. This is the one adaptation of the Burke & Hare story that truly matches the duo's horrific actions, and it contains exemplary work from Peter Cushing and Donald Pleasence.