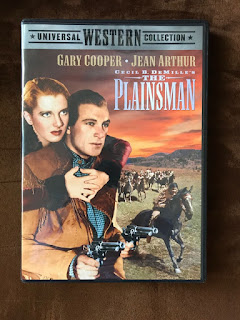 Pandemics, social unrest, a screwed-up baseball season....none of that is going to stop me from buying cheap DVDs or Blu-rays whenever I can. My latest discount purchase is THE PLAINSMAN, a 1936 Western saga from the legendary Cecil B. DeMille.

THE PLAINSMAN deals with three legends of the Old West: Wild Bill Hickok (Gary Cooper), Calamity Jane (Jean Arthur), and Buffalo Bill Cody (James Ellison). It begins after the end of the Civil War, with Hickok somewhat miffed that his friend Cody has gotten married and decided to settle down. Wild Bill is also annoyed by the attentions of Calamity Jane, a sparkplug of a gal who'll do anything to get his attention. The famous trio deal with Native Americans, the U.S. Army, and gunrunners.

Like most films directed by C.B. DeMille, THE PLAINSMAN is about as subtle as a sledgehammer. The first scene in the film shows Abraham Lincoln having a meeting with his cabinet. The President is going on about how important it will be to tame the West, when Mrs. Lincoln walks in and mentions that they're late for the theater. The main villain of the film (played by Charles Bickford), an ornery fellow who sells guns to the Indians, is so obviously a bad guy that one wonders why anyone would have any dealings with him whatsoever. THE PLAINSMAN is big, bold, and brash, and it has very little to do with the actual lives of its main characters....but it is entertaining.

Gary Cooper's Wild Bill has somewhat of a rebellious streak in him, while Jean Arthur steals the film as the sassy, whip-cracking Calamity Jane. It's very doubtful that the real Calamity looked anywhere near as pleasant as Arthur does--despite the fact that she's supposed to be a 1860s tomboy, Jean still has perfect hair and a flawless complexion. Arthur is still fun to watch, and apparently this was one of the very few projects she actually enjoyed working on. Cooper and Arthur had just made MR. DEEDS GOES TO TOWN, and their reunion here is most welcome, although their characters have a relationship much different than that in the Frank Capra classic. (Cooper would go on to work with DeMille a number of times.)

It's surprising that DeMille didn't try to get a third star to play Buffalo Bill Cody. James Ellison is all right, but such a figure needs an actor with a more outstanding personality. Maybe DeMille didn't want Cooper to be overshadowed, but I doubt that would have happened.

As is typical in a DeMille production, there's plenty of interesting actors in the supporting cast, such as Francis Ford (John Ford's brother), Gabby Hayes, and a very young Anthony Quinn, who plays a Cheyenne who gives a very spirited description of the Battle of Little Big Horn. George Custer appears in the story, along with other historical characters as Edwin Stanton and Schuyler Colfax.

THE PLAINSMAN is a very fanciful rendition of the American West, but it is meant to please audiences--which is something Cecil B. DeMille always tried to do.