THE KISS OF THE VAMPIRE On Blu-ray From Shout Factory 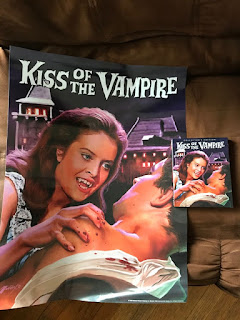 The latest Hammer film to be released by Shout Factory on Region A Blu-ray is THE KISS OF THE VAMPIRE. This 1963 color Gothic is one of Hammer's best productions.

THE KISS OF THE VAMPIRE was not directed by Terence Fisher, and it does not star either Peter Cushing or Christopher Lee. Nevertheless, it is one of Hammer's best productions, with plenty of atmosphere and intriguing characters. Production designer Bernard Robinson always did stellar work for Hammer, but he really outdoes himself here, and Alan Hume's striking cinematography takes full advantage of the exquisitely dressed sets. James Bernard provides one of his best scores, which features a memorable piano concerto.

The underrated Don Sharp directed THE KISS OF THE VAMPIRE, and he turns out an effective tale, while still being able to make some subtle twists to the Hammer formula. Producer Anthony Hinds (under his pseudonym John Elder) provides one of his best scripts.

The movie stars Edward de Souza and Jennifer Daniel as a young English couple traveling through Central Europe on their honeymoon in the early 1900s. Their motorcar breaks down, and they encounter a vampire cult led by the sinister Dr. Ravna (Noel Willman). Thankfully they are helped by the mysterious Professor Zimmer (Clifford Evans).

Usually the young romantic leads in any English Gothic film wind up being dull, but De Souza and Daniel come off as intelligent and likable. Noel Willman's Ravna is one of Hammer's best villains, and Clifford Evans steals the film as the rough-and-ready Zimmer. Special mention must be made of Isobel Black, who gives a very spirited performance as Tania, a young woman who quite enjoys being one of the undead.

Shout Factory goes all out on this release, with three different versions of the film and three audio commentaries.

The featured version of the movie has a 1.85:1 aspect ratio, and it looks stunning (just check out the magnificently vivid red dress Jennifer Daniel wears during the ball sequence). The commentary on this version has Edward de Souza and Jennifer Daniel, moderated by Peter Irving. The track was recorded a few years ago (Daniel has since passed away). The two stars of the film sound like they are having a great time, reacting to the movie at various points and telling plenty of stories about what it was like working on it and at Hammer in general.

There's also a version of the film in a 1.66:1 aspect ratio, which looks gorgeous as well. The audio commentary attached to this presents Steve Haberman and Constantine Nasr, and they go into detail on how the script for THE KISS OF THE VAMPIRE was developed.

The third version of the film included on this disc is a cut prepared for American TV by Universal in the late 1960s. This has new sequences shot for the film, and plenty of changes to the original material. It also has a very entertaining commentary by Nathaniel Thompson and Troy Howarth. There's so much that needs to be said about this TV version that I'm going to write a separate blog post on it, like I did for the TV version of THE EVIL OF FRANKENSTEIN that was also released on a Shout Factory Blu-ray. (If you don't want to watch the entire TV version--and I honestly think you should, even if only for curiosity's sake--the added scenes can be accessed separately.)

The extras include two new entries in "The Men Who Made Hammer" series, one on James Bernard and the other on Bernard Robinson. It's fitting that both men are talked about on this disc, since they did some of their best work for THE KISS OF THE VAMPIRE. Richard Klemensen from LITTLE SHOPPE OF HORRORS magazine provides info and stories on both programs, and they will be greatly enjoyed by Hammer fanatics. There's also a few trailers and TV spots.

Those who ordered this Blu-ray direct from Shout Factory received another glorious 18 x 24 poster showcasing the artwork of Mark Maddox (see picture above). The Blu-ray itself has a slipcase with this artwork, and the disc cover has the original American poster artwork for the film on the reverse side.

This is another simply outstanding Shout Factory Hammer Blu-ray release--in fact I think it is one of the best-looking transfers in the entire series. The multiple versions, the multiple commentaries, the two "The Men Who Made Hammer" entries, another great poster....I know re-buying the same movies over and over can be a pain, but Shout Factory is giving Hammer fans very legitimate reasons to go to the well again.