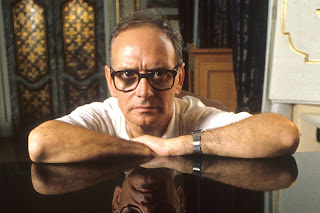 How does one even attempt to define the majestic genius of Ennio Morricone??

Even declaring him the greatest and most prolific film composer of all time barely scratches the surface. Morricone's impact on popular culture--heck, modern society--is immeasurable.

Morricone didn't just produce scores for Euro Westerns. He worked in every genre, on every type of story, and with all sorts of directors. Whatever genre he worked on, he redefined it, musically.

His work has also been quoted, imitated, and-for lack of a better phrase--ripped off thousands and thousands of times. But nothing sounds like the music of Ennio Morricone.

The very first movie soundtrack I ever bought--on cassette tape, back in the 1980s--was THE GOOD, THE BAD, AND THE UGLY. I own hundreds of movie soundtracks now, many of them also by Morricone. The man's music opened up whole new worlds for me. One of the main reasons I am a film geek is due to Ennio Morricone.

I'm sure plenty of others have stories like mine. And there will be plenty of others in the future who will be influenced by the man. Morricone's music belongs to no time, or country, or genre--it is eternal. His work and his career are absolutely unique.

I could write paragraph after paragraph, using up all the superlatives there are in discussing Morricone.....but instead of doing that, why don't we all listen to some of his music today??
Posted by Dan Day, Jr. at 12:14 PM