NIGHT OF TERROR is a 1933 mystery-thriller from Columbia Pictures, starring Bela Lugosi. I recently watched it for the first time on Tubi.

This is the first of many old dark house/mystery/horror films that Bela would appear in during his acting career. Lugosi would always be a red herring, or, in other words, the guy that didn't do it. These movies usually had a comedic element to them (or, more accurately, tried to have a comedic element), and Bela would often be a suspicious butler or servant. Despite the presence of Lugosi, these movies would invariably never be all that exciting or entertaining.

NIGHT OF TERROR concerns strange events happening at the Rinehart estate. Despite a running time of little over an hour, the movie packs in plenty of plot contrivances. There's a knife-wielding murderous maniac (who resembles a grungy werewolf) prowling outside the estate, while there's another killer at work within. There's sliding panels, greedy relatives who want a bigger slice of the murdered Prof. Rinehart's will, an scientific experiment involving a man being buried alive, a young beautiful woman, a dopey detective, an annoying reporter, and even a scaredy-cat black chauffeur.

All of these elements do not fit together very well, and the story doesn't seem to know whether to be silly or serious. Despite all the goofy characters, the movie is quite brutal, with over a half-dozen murders, and it opens with the knife-wielding maniac sneaking up on a innocent young couple sitting in a car at night and murdering them. (One gets the feeling that the body count would have been much lower if the film had been made later than the Pre-Code era.)

Bela Lugosi plays Degar, a Hindu servant to the Rinehart family. Bela gets to wear a turban and a earring, and he acts as mysterious as all get out, constantly giving everyone shifty looks. Surprisingly, Lugosi gets a wife in this film--she's a medium who holds the aforementioned seance, and gets murdered before she can reveal anything. This allows Lugosi some emotional moments, and he even gets a chance to capture his wife's killer. NIGHT OF TERROR is not an example of an all-out, full-blown Lugosi performance, but he does get to do much more than he would in his many later suspicious servant roles. 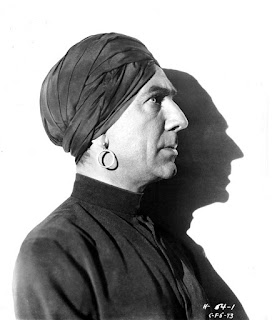 The supporting cast features two actors who would have later connections with Bela. Wallace Ford is the pain-in-the-neck reporter, and he would in the future play basically the same role alongside Bela in THE MYSTERIOUS MR. WONG and THE APE MAN. Sally Blane is the female lead, and she was a sister to major screen star Loretta Young. Another one of Loretta's sisters, Polly Ann Young, would play Bela's daughter in INVISIBLE GHOST.

Ben Stoloff was the director of NIGHT OF TERROR. He keeps thing moving rather quickly here (of course, with so much material to work with, he didn't have much of a choice). A number of extreme close-ups are used to punctuate the action.

The ending features the knife-wielding maniac (played by Edwin Maxwell) breaking the fourth wall and addressing the audience. I assume this was meant to be creepy...but due to Maxwell's over-the-top performance, it comes off as silly. It's an outrageous way to climax the picture--but one could say that it makes it memorable.

And that is one thing that can be said about NIGHT OF TERROR--it's memorable. It may not be all that great, but it has enough going on in it that at least it isn't sleep-inducing, the way some of Bela's other low-budget features wind up being.

For some reason, NIGHT OF TERROR has not had a major official home video release. One would expect that with Bela Lugosi being the top-billed star, that alone would have been enough. (If this movie had been produced by Universal, I'm sure it would be on Blu-ray by now.) A restored release by a company like Kino or Shout Factory, with an audio commentary, is sorely needed.