THE CARPET OF HORROR 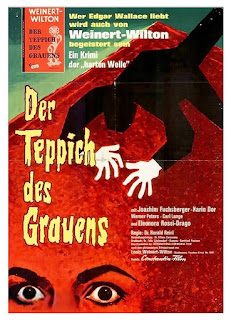 THE CARPET OF HORROR is a 1962 krimi film, a German/Italian/Spanish production. It stars the royal couple of the krimi genre, Joachim Fuchsberger and Karin Dor. The original German title for this is DER TEPPICH DES GRAUENS.

Despite the title, there's no horrific carpets on display here, so no one has to call 588-2300 EMPIRE. It's what's placed on a carpet that is horrible. A gang of criminals based in London are killing off their enemies by depositing a substance shaped like a marble on the carpets of the victims. The substance evaporates into a deadly gaseous poison.

Secret agent Harry Raffold (Joachim Fuchsberger) is investigating the case, and he becomes close with the niece (Karin Dor) of one of the victims. Harry tracks down the gang to a run-down auto repair shop, which is above a series of secret tunnels. With the help of Scotland Yard, the villains are captured.

Despite its krimi status, THE CARPET OF HORROR has nothing to do with anything written by Edgar Wallace (or even his son). It still has most of the attributes associated with the krimi--excellent black & white photography, atmospheric nighttime sequences, a mysterious gang operating in London, and some science-fiction and Gothic horror elements. It's not as outlandish as many of the krimis I have seen, but it's still entertaining, and worth checking out.

Among the highlights here is the early "texting" system the criminal gang's unseen boss uses to communicate with them. The Mabuse-like boss figure is not revealed until the end (my guess was wrong). As with most krimis there's plenty of shifty and suspicious characters about, and Karin Dor, as she would often be in these films, gets kidnapped and tied up in the gang's secret hideout.

According to internet sources, most of this movie was filmed in Madrid, despite being set in London (and the opening shot of Big Ben). I noticed a few Spaghetti Western supporting actors among the criminal henchmen.

I viewed THE CARPET OF HORROR on the Tubi streaming channel. The print was surprisingly excellent--it was sharp and clear, and it was in widescreen. It had English main titles crudely added to it (which misspelled the names of most of the actors). The movie was dubbed in English, and many of the phony Limey accents added on were quite silly.

THE CARPET OF HORROR isn't overtly gory or violent, and it is well directed by genre veteran Harald Reinl.