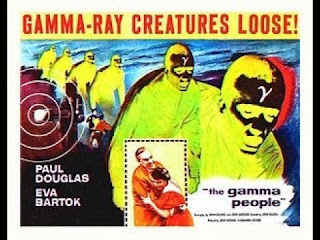 Another obscure British science-fiction film directed by John Gilling. This time it's the 1956 production THE GAMMA PEOPLE. Gilling also co-wrote the script.

Two newspaper reporters (Paul Douglas and Leslie Phillips) are traveling on a train through Europe, when they are inadvertently stranded in a very small principality called Gudavia. The place seems to be still stuck in the 19th Century, and the main authority is a scientist who calls himself Boronski (Walter Rilla). The reporters recognize him as a man who disappeared years ago under another name. Boronski has a laboratory inside a large castle, where he experiments on the local populace with gamma rays. Boronski also has Gudavia under his thrall--he has a personal army of unfortunates who are the results of his unsuccessful experiments, zombie-like creatures called "goons". A young woman who assists Boronski (Eva Bartok) decides to help the reporters in trying to stop the scientist's plans.

THE GAMMA PEOPLE is a strange film that doesn't seem to know what it wants to be. The country and people of Gudavia are portrayed in an almost comic manner (the place resembles one of those fictional communities the Three Stooges would often find themselves in), while Boronski is a deadly serious fellow who experiments on children. At times the story seems to veer toward a Cold War political thriller, but it's hard to consider Gudavia and its citizens much of a threat.

The science-fiction elements don't jell well with the rest of the film, and the more intriguing situations are not explored enough. One of Boronski's "patients" is a young boy who acts like a little tyrant, and he leads a group of similar-looking and similar-dressed children, who remind the viewer of the kids in VILLAGE OF THE DAMNED. (Ironically, Walter Rilla's son Wolf was the director of that film.)

There's also some Gothic elements here, with Boronski the equivalent of a Dr. Frankenstein or a Count Dracula, in that he lives in a large castle outside of town, is the instigator of mysterious happenings, and has the local populace afraid of him. The pack of "goons" could have been a highlight, but they seem more silly than horrible.

Paul Douglas and Leslie Phillips play very unusual leading characters for this type of film. Douglas, a middle-aged American character actor, is brusque and sarcastic, while Phillips does a "Cheerio, old chap" type of Englishman. (It's hard to believe that these characters are long-time friends.) Douglas is essentially playing the role that Brian Donlevy and Forrest Tucker did in many other British sci-fi movies of this period.

THE GAMMA PEOPLE isn't boring--if anything it has too many things going on in it. There are some nice Austrian locations used for Gudavia, and a few incidents in it bring to mind scenes in John Gilling's later films. For example, Boronski's lab and castle go up in flames at the climax, and a shot of characters viewing the blaze reminds one of a similar set-up in both THE PLAGUE OF THE ZOMBIES and THE REPTILE.

THE GAMMA PEOPLE is a weird concoction that might have been better if it had a more focused plot.