A strange object from space lands in the English countryside, tracked by a group of scientists (John Saxon, Maurice Denham, and Patricia Haines). The scientists assume that it is a meteorite, but it is discovered to be a basketball-sized sphere. Upon investigation, the sphere is found to be an "energy valve", and its true purpose is to be a receiver for transmitted matter. The matter happens to be a being from the third moon of Jupiter, who escapes from the base where the sphere is being studied. The being takes the sphere with him, and soon a number of young attractive women have gone missing. The being contacts the women through an advertisement for models in a girlie magazine! The scientists and Scotland Yard team up to try and stop the "night caller" from abducting more women.

Like so many English sci-fi films made in the same period, THE NIGHT CALLER has a low budget, and a very low-key tone to it. If you're expecting weird monsters and plenty of special effects, you'll be disappointed (it's nothing like the poster shown below). The movie resembles the first two Quatermass stories made by Hammer Films, with stark black & white photography and serious, hard-working scientists dealing with military men and police officials.

The first part of the movie not only has a Quatermass feel, it also brings to mind the early 1970s DOCTOR WHO episodes that dealt with the UNIT organization. John Carson (who would also work with John Gilling in THE PLAGUE OF THE ZOMBIES) plays a no-nonsense army major that reminds one of UNIT's Brigadier. (Jack Watson, another Hammer veteran, plays his sergeant.) After the alien escapes from the base with the sphere, the movie turns into a noir-like police investigation story on the streets of London. Saxon and the cops figure out how to track down the alien, but instead of a major confrontation, the story comes to an abrupt and unsatisfying end (probably due to the budget).

THE NIGHT CALLER is very talky at times, and it also has a title song that seems more suited for a romantic drama. John Gilling does the best he can to enliven the material, with plenty of hand-held camera work and unusual close-ups. The alien is kept in shadows for most of the film, except for his claw-like hand, which wouldn't be out of place in a AIP 1950s drive-in flick.

The climax reveals the being's plan--it's the one about kidnapping Earthlings to replenish a dying alien race. When the alien is finally fully shown, it's a big letdown (unless you think that a race from a moon of Jupiter would look mostly like us). 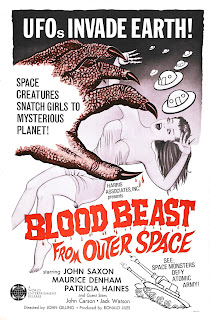 A poster far more exploitative than the actual movie.

The cast of THE NIGHT CALLER play it absolutely straight, especially Saxon, who would go on to make plenty of science-fiction and horror films that were far wilder than this. THE NIGHT CALLER should get some credit for taking itself seriously, but one can't help but wonder if it would have played better with some more pulp elements injected into it. The idea of an alien basically using a "casting couch" to get women for breeding purposes is a notable one, but the story doesn't take advantage of all the possibilities such a situation could present. THE NIGHT CALLER is much better made than one would expect, but I felt that it could have been more memorable.