THE KISS BEFORE THE MIRROR On Blu-ray From Kino 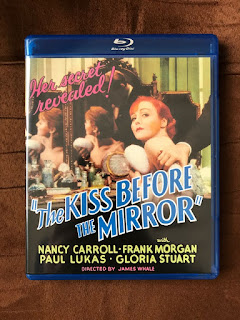 THE KISS BEFORE THE MIRROR is a stylish 1933 courtroom drama produced by Universal and directed by the great James Whale.

The story is set in Vienna, where distinguished lawyer Paul Held (Frank Morgan) defends his friend Walter Bernsdorf (Paul Lukas) after the man has killed his unfaithful wife. As Walter tells Paul about the events leading up to the crime, the lawyer starts to doubt the love of his own wife. Sure enough, Mrs. Held (Nancy Carroll)--a young, beautiful woman, like Mrs. Bernsdorf--is having an affair. The distraught Paul comes to the conclusion that if he can get Walter off by claiming temporary insanity, he might be able to kill his own wife--and get away with it as well.

THE KISS BEFORE THE MIRROR is not a whodunit--it's more of a "Will he do it?", as in, will Paul get his friend off from a murder charge, and then kill his own wife? It's an unusual plot that gets the viewer's interest, especially due to the fact that this is a Pre-code film, which means all bets are off when it comes to the usual Hollywood movie morality. (Universal and Whale remade this film in 1938 under the title WIVES UNDER SUSPICION. I haven't seen that picture, but it was apparently changed considerably, with lesser results.)

What really sets this film apart is the visual highlights injected into it by director Whale and cinematographer Karl Freund. The constantly moving camera and the expressionistic lighting fit the melodramatic aspects of the story perfectly. The acting is quite melodramatic as well, but in a good way. Frank Morgan will forever be known as the Wizard of Oz, but he fits the bill quite well as a sophisticated and intelligent man whose suspicions nearly drive him over the edge. Paul Lukas plays Bernsdorf as a man emotionally drained by his crime, and Jean Dixon (who played the maid in MY MAN GODFREY) grabs attention as Held's level-headed associate. Monster movie fans will notice Michael Mark, who is in attendance at Bernsdorf's trial.

Gloria Stuart and a very young Walter Pidgeon have cameos as Mrs. Bernsdorf and her lover in the opening sequence. The beginning of the film must have been a shocker to audiences--Stuart and Pidgeon are preparing for a night together, and one thinks that they are the main characters of the story, when Lukas sneaks in and puts three bullets in his errant wife.

THE KISS BEFORE THE MIRROR looks spectacular on this Kino Blu-ray, with a sharp black & white picture that offers up plenty of detail. There are times when the sound level needs to be turned up a bit, but I believe that is due to the original source material.

The main extra here is a new audio commentary by Alexandra Heller-Nicholas, who spends most of her time theorizing about gender politics. (I wish that someone who was an expert on the history of Universal during the early 1930s, such as Greg Mank, had done a commentary for this.) There are also some trailers included of other Kino releases that were made during the same period as THE KISS BEFORE THE MIRROR.

James Whale is one of my favorite all-time movie directors, but his non-horror work has gotten very little attention so far on home video. Hopefully this release means that Kino has plans for other Whale films in the future. THE KISS BEFORE THE MIRROR shows what Whale could do with a contemporary story, and his quirky editing style (and humor) are in evidence here. At only 69 minutes, THE KISS BEFORE THE MIRROR is a fast-paced, intriguing movie that deserves to be better known.