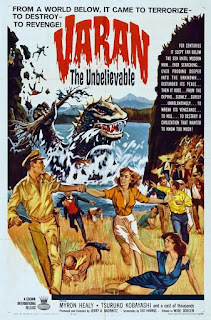 This is the 1962 American version of a 1958 Toho film originally titled DAIKAIJU BARAN. The Toho version is not one of the company's best science-fiction features, but it is a fairly decent giant monster movie. It also had the involvement of Toho's talented trio: Ishiro Honda as director, Eiji Tsuburaya as special effect director, and Akira Ifukube as music composer.

The American VARAN wastes the talents of these three men. It changes the original story around completely, without any improvement in pace, mood, or style. Akira Ifukube's original music was not used for the American version, and Eiji Tsuburaya's FX work is drastically curtailed, and presented in an unflattering way.

The American VARAN stars B movie actor Myron Healey as a US Navy Commander who is engaging in experiments at a lake on a small remote Japanese island. The experiments somehow awaken a giant beast, which in the usual fashion runs amuck, and has to be destroyed by the military.

VARAN attempts to be another GODZILLA, KING OF THE MONSTERS, where footage of an American actor is intercut within the original Japanese version to try and make it more mainstream to a Western audience. The difference is that the 1956 American version of GODZILLA was cleverly crafted, with Raymond Burr believably interacting with the Japanese scenes. VARAN is clumsily edited and stitched together, and Myron Healey has almost no connection whatsoever with what is going on in the story. (I will say that Healey does play his role with total conviction.) Jerry A. Baerwitz is credited as the director/producer of the American VARAN. Ishiro Honda, Eiji Tsuburaya, and Akira Ifukube are not credited...which is probably just as well.

As for the title creature, he's not one of Toho's more memorable monsters. He (or it) is a ugly, scaly, reptilian beast, with no personality. In the original Japanese version, Varan is able to take to the air like a flying squirrel! Varan's flying scenes were not used in the American version, which is a shame, since they would have given it some interest. Varan would later return with a small cameo in Toho's magnificent DESTROY ALL MONSTERS.

The original Japanese version of this movie can be found on a DVD from Tokyo Shock, which came out earlier in this century. This DVD is now out of print, but it contains the uncut original film, with the Japanese soundtrack. (Of course, I own this disc....what do you take me for??)

Needless to say, the Japanese version of VARAN is much better than the American one. The 1962 VARAN, along with other American versions of kaiju cinema, is one reason why so many looked down on the genre. But it must be pointed out that these hybrid films also introduced the genre to many fans.