The Spencer Tracy & Katharine Hepburn Blogathon: STATE OF THE UNION 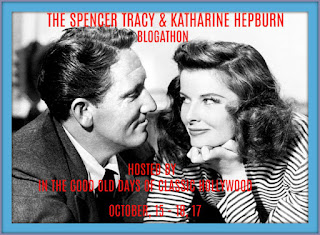 My choice for the Spencer Tracy & Katharine Hepburn Blogathon is a movie that doesn't seem to get the attention of other Tracy-Hepburn pairings such as ADAM'S RIB and WOMAN OF THE YEAR. The choice is STATE OF THE UNION (1948), directed by none other than the legendary Frank Capra. With the combination of Tracy, Hepburn, and Capra, one expects a lot out of this movie--and maybe that's why it doesn't have a more well-known reputation, as I will explain later on. I wrote a blog post on this movie a few years ago, and I have re-written it and re-edited it for the purposes of this blogathon.


If there is any actor that looked like a President (especially in his later years), it's Spencer Tracy. It's hard to believe he never actually played one on screen. He did play a powerful big-city mayor in THE LAST HURRAH, but the closest Tracy got to the cinematic White House was in STATE OF THE UNION. Tracy plays airplane magnate Grant Matthews, who is set up as a Presidential candidate by powerful newspaper publisher Kay Thorndyke (Angela Lansbury). Matthews and Thorndyke are also having an affair. Matthews is sent on a cross-country speaking tour, and his political handler (Adolphe Menjou) decides it would be a good idea for Grant's estranged wife Mary (Hepburn) to go along. Mary swallows her pride and agrees, because she still loves her husband and thinks he really would make a great President.

As one can see, the title of this film has a double connotation. It refers not to just Matthews' quest for office, but his marriage as well. Ironically for a Tracy-Hepburn movie, the famous couple don't have a lot of scenes together. Hepburn doesn't even make an on-screen appearance until about a half-hour into the story. It's unusual to see Hepburn in this type of role--one expects her to be more forceful and try harder to upset the plans of her husband's political advisers. Believe it or not Hepburn is upstaged by Angela Lansbury. Lansbury is as cold and sullen as can be--one wonders what Grant Matthews even sees in her--but she steals every scene she's in. It would have been interesting if Hepburn had played Angela Lansbury's part.

No other actor could make a speech or recite dialogue like Spencer Tracy, and he makes a mighty attractive Presidential candidate. Grant Matthews is a plain-speaking, populist idealist who says at the start of the film that he "hates politicians". Even though this movie was made 65 years ago, today's viewers will be reminded of recent independent non-political politicians when they watch Matthews. He's got a little of Ross Perot, and yes, even a little Donald Trump in him. I don't like bringing up the Trump comparison, but unfortunately it has to be done. I must point out that for the most part Grant Matthews is very different from Trump--but remember that this film came out in 1948, and voters of that time might very well have reacted to Matthews the way people do today to the current President.  The script makes sure that Matthews stays middle-of-the-road when it comes to actual ideas--at one point Matthews criticizes labor AND big business--so he'll be on the good side of most of the audience.

Even though Grant Matthews sounds a lot like other Frank Capra heroes like Longfellow Deeds and Jefferson Smith, he doesn't have much in common with them. As his speaking tour goes along, Matthews becomes so excited by the chance of winning the Republican nomination that he starts "playing ball" and doing things the typical politician's way. Capra's Mr. Deeds and Mr.Smith got into trouble by trying to do the right thing. Grant Matthews thinks that if he abandons his principles to get to the White House, he can make up for it by doing all the right things as President. (That's probably what every American politician says to him or herself every day of their lives.) One of the reasons why STATE OF THE UNION does not share the legendary status of most of Frank Capra's work is probably due to the lead character. It's easy to root for Mr. Deeds, and Mr. Smith, and George Bailey...but Grant Matthews, despite his supposed integrity, is a man who's having an affair and desperately trying to obtain an office he keeps saying he doesn't want.

The climax of STATE OF THE UNION revolves around a live television broadcast from the Matthews home. This sequence is where Capra is at his best, with a large crowd, fast editing, and various characters reacting to one another. It also sets up a great "actors moment" for Tracy as he comes clean and tells his nation-wide audience that he's not the man they think he is. There's a great line of dialogue as the political hacks try to stop Tracy from speaking...he yells out "I'm paying for this broadcast!!" That's a line Ronald Reagan would paraphrase in a real debate.

STATE OF THE UNION, for whatever reason, has never gotten a lot of love from Frank Capra buffs or Tracy-Hepburn fans. Maybe the combination of a great director and one of the greatest screen couples just set the bar too high. STATE OF THE UNION was based on a play, and at two hours length the story does have a lot of talky scenes (but there's nothing wrong with listening to Spencer Tracy talk). One of the interesting things about the movie is that unlike other Hollywood Golden Age political films, it is set in the "real world". Republicans and Democrats are mentioned, and so are actual politicians like President Truman, Dewey, Taft, and Wilkie. This may date the film badly for some people but the main storyline could easily be remade today with just a few changes. (If the story was remade now, you can bet the character of Grant Matthews would be far more Trump-like.) STATE OF THE UNION may not be the best Frank Capra movie, or even the best Tracy-Hepburn movie, but it still holds up very well today. It also shows us that all the things that we complain about in today's political world....the media controlling (and propping up) candidates, the influence of special interests, the gap between a politician's public stances and his private life...all these things were around 70 years ago, and they'll most likely always be around.