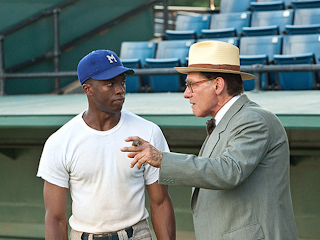 42 is a movie I really wanted to see. But I also felt a bit trepidatious. If there's anything I love more than movies, it's baseball. Because of that, I was fearful that 42 might be filled with typical sports-film cliches and various historical and technical mistakes. I needn't have worried--42 is more than just a great baseball movie, it's an impressive recreation of a important moment in modern American history.

The story begins by setting the social and historical background of America and baseball in 1945 through the words of African-American sportswriter Wendell Smith (Andre Holland). We are then introduced to Brooklyn Dodgers General Manager Branch Rickey (Harrison Ford), who announces that he is going to sign a black player to the Dodgers organization. At that time, every Major League (and official Minor League) baseball player was Caucasian.  Rickey's "Great Experiment" is to break the unofficial color line then in effect throughout Major League Baseball.

Writer/Director Brian Helgeland adroitly handles these early scenes in a crisp, efficient manner. He explains to the audience what it needs to know and what Rickey is doing without being convoluted or boring. Because of this we are quickly introduced to Negro League player Jackie Robinson (Chadwick Boseman). We find out enough relevant information about Jackie, and about the situation that he is going to face. Helgeland thus sets up the rest of the film in a way that even non-baseball fans and those who don't know a lot about Jackie Robinson's story can still be involved in the tale.

And a dramatic tale it is. Some historians say that Jackie Robinson's debut in the Major Leagues was the actual beginning of the Civil Rights movement. What really worried me was that 42 might be infused with extra "stuff"--but Helgeland wisely sticks to the facts. With all the interesting real-life figures, and all the importance behind the real-life events, Helgeland didn't have any need to stray too far. Some might think, for example, that the garrulous Branch Rickey is a bit exaggerated, but the eccentric, larger-than-life baseball legend is presented pretty much as the way he was.

As for Harrison Ford....a number of aging, former leading men have wound up winning Best Supporting Actor Oscars (Sean Connery, James Coburn, Christopher Plummer, etc.), and the erstwhile Captain Solo/Dr. Jones may be the next. By the end of 42, you forget that it's Ford as Rickey...Ford submerges himself in the role. Chadwick Boseman does well as Jackie Robinson. It's refreshing that Jackie is not portrayed as a saint--he's a real human being, a proud, competitive man with a wife and a child to support. Boseman (and the script) also give Jackie a somewhat suspicious nature, explained in the movie by Jackie being abandoned by his father and by Jackie exclaiming that he doesn't like relying on anyone else. Considering what Robinson had to go through, it's easy to understand that suspicion.

Those things that Robinson had to go through are shown in a truthful and (thankfully) non-PC manner. Unlike just about every modern-day movie hero, Jackie Robinson has to not lash out, to not get easy revenge. Jackie's inner conflict is presented very well, as is the support of his wife Rachel (Nicole Beharie).

42's production design and art direction are top-notch. You absolutely feel you are in 1947--there isn't really a false note in the film. As far as I can tell, all the various uniforms are accurate, and we get to see some stunning CGI recreations of late, lamented baseball stadiums such as Ebbets Field, the Polo Grounds, and Sportman's Park. (If CGI has to be used, this is the way to use it.) A number of real-life baseball personalities are dramatized including Pee Wee Reese, Ben Chapman, Burt Shotton, Dodgers play-by-play man Red Barber, and Eddie Stanky. Special mention must be made of Christopher Meloni as the fiery Dodgers manager, Leo Durocher. (Somebody needs to make a movie based on Leo's life.)

The baseball scenes look great, and Chadwick Boseman must have studied films of Jackie....he runs like him, he slides like him, and he even copies his batting stance. When Boseman is wearing the Brooklyn Dodgers uniform, he uncannily resembles Jackie Robinson.

How good is 42? At the screening I attended, the audience applauded as the credits came up. That almost never happens whenever I go see a film. I think part of the applause was for Jackie Robinson as much as the movie. But 42 really is an impressive achievement. It's more than just a baseball story, or a historical story--it's an American story, and it should be seen by all Americans.