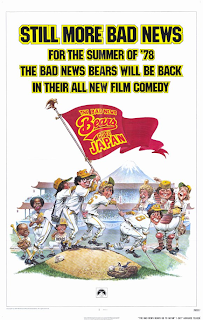 In BREAKING TRAINING, the Bears won the right to play a game in Japan. That would seem to be enough material for a decent story--and it is--but BNBGTJ spends very little time on the actual Bears. The star of the film is an over-the-hill Tony Curtis, as shady agent Marvin Lazar. Curtis was a huge matinee idol in the 1950s and 60s, but here he's just an aging leading man playing a very annoying character. Marvin Lazar hopes to use the Bears' game in Japan to make some quick cash, and while his con artist act is supposed to be amusing, it just leaves the audience wishing one of the Bears would hit him upside the head with a baseball bat.

Why the Bears would even let themselves be represented by Lazar is a head-scratcher. Some of the original Bears are not in this film, and they are missed, especially Tanner. It would have been great to see how someone like Tanner would have reacted to Japanese culture. Tanner certainly would have dealt with Marvin Lazar in his own special way. BREAKING TRAINING showed how the Bears were able to fend for themselves; in this story Lazar makes all the decisions and moves the story along. The Bears are not the main focus, and the movie suffers because of this.

Jackie Earle Haley is back as Kelly Leak. One would expect Leak to be the Bears leader (as he was in BREAKING TRAINING) but in most of his scenes with the team Kelly is either standing off to the side or placed in the background. The viewer keeps waiting for Kelly to confront Lazar, but it never happens. Kelly spends most of the movie away from the team, involved in a romance with a young Japanese girl. One reason for this may have been by this time, Haley looks about twice as old as the rest of the team. But as anyone familiar with the Bad News Bears series knows, Kelly Leak is a main component of these films and to have him separated from what is going on doesn't make much sense.

One of the new characters introduced in BNBGTJ is Ahmad's younger brother Mustapha. When you have a movie about kids, and you bring in an even younger and supposedly "cuter" kid....it says that you are desperate for new ideas. Mustapha spends most of his time hanging out with Lazar...it's obvious Mustapha is supposed to "humanize" the con man. Their scenes together are not cute or funny. The rest of the new Bears are totally unmemorable.

At least the movie really was filmed in Japan. We are introduced to such events as a judo match (in which Lazar takes part to win some cash) and a typically strange Japanese game show. However, the Bears have very little to do in either, and we really never see the team have much experience with Japanese culture. We unfortunately get to spend a lot of time with Tony Curtis. Somehow someone got the idea that all the Bad News Bears fans wanted to see a slick publicity agent go through a mid-life crisis. Curtis goes through the film being a conceited, fast-talking jerk. There are actors who could have played this role and made it interesting and entertaining--Tony Curtis isn't one of them.

The most disappointing thing about BNBGTJ is that it was written by Bill Lancaster, the man who wrote the script for the first Bears film, and the producer was Michael Ritchie, who directed the original. Usually a sequel fails because it is put in the hands of people who were not connected with the original, but that excuse cannot be used here.

If THE BAD NEWS BEARS GO TO JAPAN had actually been about the Bad News Bears, it would have worked. Instead we get to spend nearly the whole running time with a very unappealing Tony Curtis. But even if this entry had been successful, there was very little future in store for the series. For one thing, the kids would have kept growing up. There's also the problem that even though the Bears are presented as a wacky team of mediocre misfits, they're always playing a big game in every film. There's only so far you can go with the "lousy underdog sports team plays for the championship" concept.

The Bad News Bears are very much a product of the Seventies. They are politically incorrect, but at the same time decent-hearted and somewhat quaint. Yes, they cuss a lot....but compared to movie & TV kids of the 21st Century, they're pretty tame. All over America today various local Little Leagues are shutting down. Most kids can hit .400 on a video game, but they can't swing a bat to save their lives. The Bad News Bears film series is probably more enjoyed now as an nostalgic escape by grown adults. If you take the time to watch the Bears movies again (especially the first two), you might be surprised at how well they hold up and how entertaining they are.