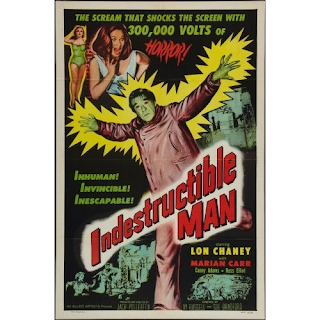 How low-budget is INDESTRUCTIBLE MAN? It's so low-budget, they couldn't even put a "THE" in the title.

INDESTRUCTIBLE MAN has long been a staple of public domain home video. Retromedia Entertainment has now released the film on DVD in enhanced 1.66:1 anamorphic widescreen. The picture quality still isn't great, but this DVD is probably going to be the best version of this movie.

INDESTRUCTIBLE MAN features classic horror icon Lon Chaney Jr. as Butcher Benton, a hardened criminal who is executed, then revived by a scientist trying to increase cellular regeneration. The scientist's experiments render Butcher invulnerable (and mute), and soon the living dead man is on his way from San Francisco to Los Angeles to get revenge on the men who turned State's evidence on him.

INDESTRUCTIBLE MAN was made in 1955. At that time in his career Lon Chaney Jr. was working steadily as a character actor. He was shifting between major features such as HIGH NOON and cheap horror/sci-fi projects such as the film discussed here. Butcher Benton is basically a rehash of Chaney's portrayal of Lennie from OF MICE AND MEN and his role in MAN MADE MONSTER. The main difference is in those earlier films Chaney is someone the audience sympathizes with, while Butcher is a bad guy right from the beginning. If the script had made Chaney more of a victim of circumstance (like in so many of his great horror roles) INDESTRUCTIBLE MAN would have made more of an impact.

What makes INDESTRUCTIBLE MAN stand out from all the other 1950s monster flicks is it's seedy film noir atmosphere. The movie is narrated by the police detective working the case (Casey Adams). There are times when Adams' DRAGNET style delivery gets to be unintentionally amusing, but it does help the viewer figure out what is going on. (I get the feeling the narration was added on after filming to cover some of the gaps in the screenplay.) Despite the horror/science-fiction angle, INDESTRUCTIBLE MAN is really a crime story, set in the non-glamorous parts of L.A. There's some unusual location shooting of what looks like a skid row district, giving the movie an almost gritty documentary feel. The problem is this sequence just makes the rest of the story look even cheaper and weaker.

Butcher Benton has a torch for a burlesque dancer (Marian Carr). There are a number of scenes set backstage at the burlesque house (the police detective has the hots for the lady as well). The burlesque angle also contributes to INDESTRUCTIBLE's grimy feel. But Carr is given some scenes to explain that she's really a nice girl--she became a dancer because she needed a job--and she didn't even know that "Charles" (she calls the Butcher by his real name) was a crook! Yeah, right..... 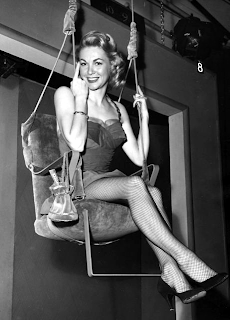 
The idea behind INDESTRUCTIBLE MAN is a good one--violent criminal is brought back from the dead, and cannot be killed by bullets--but like a lot of low-budget monster pictures, the result does not live up to the premise. Lon Chaney Jr. by this time was not in the best of shape, and he's stuck playing another big, mean, lumbering madman. Director Jack Pollexfen constantly shows a extreme close-up of Chaney's jowly face, quivering with rage--but this shot loses it's effect after it's been used about twenty times. There's plenty of stock footage of police cars and motorcycle cops--some of these shots are used more than once. It seems that there was a lot of padding added to this film....but according to a number of internet sources this movie had a lot cut out of it. There's a number of stills which show scenes that don't appear in the final film, including one of Chaney breaking into a police station and carrying off Marian Carr in the time-honored monster-movie tradition. Why this sequence was cut is puzzling, as it looks more intriguing than most of the stuff that's in the actual release. 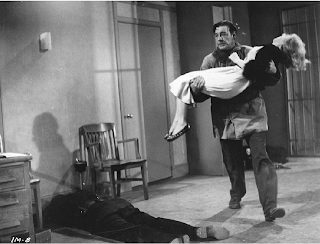 This scene is not in the film!

If you have a movie called INDESTRUCTIBLE MAN the audience expects to see the title character being....indestructible. For most of the running time we see Chaney being shot at by cops and surviving, but that's about it. His special power kind of goes to waste. Toward the climax things pick up a bit. The cops track Chaney to the Los Angeles sewer system, and Lon gets nailed by a bazooka blast, after which he walks around holding his stomach as if he had a bad lunch. Lon then gets attacked by flamethrowers, which allows him to wear a gruesome face makeup (just like his old days at Universal). The Butcher then winds up at a electrical station, where he rides an overhead crane into contact with a power transformer, frying him for good.

INDESTRUCTIBLE MAN is not a great role for Lon Chaney Jr., but it is a very representative one. It's also not a great film, but it does have enough unusual aspects to be worth viewing for fans of Chaney Jr. and fans of 1950s horror/science-fiction films.
Posted by Dan Day, Jr. at 4:20 PM