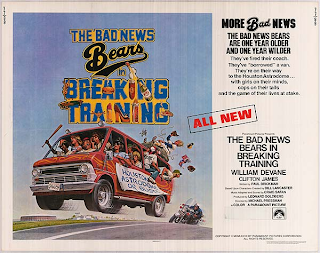 In Issue #172 of Video Watchdog, Quentin Tarantino listed his Top 50 Best Movie Sequels. Coming in at No. 19 was THE BAD NEWS BEARS IN BREAKING TRAINING. This is a movie that is written off by most as nothing more than a quickie attempt to continue the success of THE BAD NEWS BEARS. But there's a lot more to it than that, and there are legitimate reasons why someone like Tarantino would rate it so highly.

BREAKING TRAINING is casually dismissed by most because it does not feature Walter Matthau or Tatum O'Neal, the big-name stars of THE BAD NEWS BEARS. One has to remember that the BEARS films are about a Little League team--there wasn't a movie called MORRIS BUTTERMAKER & AMANDA. The kids are the real main characters, and although Matthau and O'Neal are missed, BREAKING TRAINING doesn't really suffer all that much without them. Why Buttermaker and Amanda are not around is never really explained--the movie totally avoids the subject, thereby freeing the audience from being constantly reminded of them. A unique way of going about it, to be sure, but certainly a lot better than some of the convoluted reasons trotted out by other sequels for the lack of a certain character or performer.

Something else is not explained in BREAKING TRAINING--why the Bears get to go play a game in the Houston Astrodome against a Texas Little League Champion. In the first BEARS movie, the team lost in the championship game. Since the sequel was made a year later, did the Bears win the title the next year? Or did the team that the Bears lose to in the first movie, the Yankees, have to forfeit the crown because their coach slapped his son during the game? Or....maybe it's just one of those "movie things".

All of the kids from the first film return in BREAKING TRAINING, a major reason why this sequel works so well. The nerdy Timmy Lupus is laid up with a broken leg; he cannot accompany the team to Houston, but his situation becomes a major sub-plot.

As BREAKING TRAINING begins, the Bears have to find a way to Houston without a Coach (or any parental supervision). They also need to find a pitcher, which team leader Kelly Leak (Jackie Earle Haley) provides in the person of Carmen (Jimmie Baio), a kid with more attitude than ability. The kids all con their families into approving the trip, and soon they are off, traveling in that bastion of 1970s American transportation...the strangely painted van (driven by Kelly Leak).

The comedic "road trip" has long been a film staple. The road trip presented in BREAKING TRAINING is quaint compared to modern movies....heck, it's quaint compared to modern prime time television. Despite all the cussing and the presumed bad behavior, the Bad News Bears kids are pretty normal...another reason for their continuing cult popularity. During the team's overnight motel stay, the most provocative things the kids do are engaging in a pillow fight and looking at some Playboy magazines.

In one of those incredible coincidences that only happen in movies, Kelly's estranged father lives in Houston. Kelly contacts him and persuades him to be the Bears' Coach and "official" chaperon (the Bears can't play in the big game without one). For an ordinary, working-class guy, the elder Leak has a fair amount of inside baseball knowledge (including how to properly execute the hidden ball trick) and the Bears (SPOILER ALERT) win this time....earning them the right to play a game in Japan.

Most sequels are not very good. BREAKING TRAINING works because it takes a set of defined characters, expands upon those characters in certain ways, and puts those characters in a different environment than the original film....but also in a somewhat similar situation.

Kelly Leak is still kind of a bad-ass, but he's matured a bit. It's Kelly Leak who takes over as the Bears leader--he's the one who hatches the plan to get the kids to Houston, and he's the one who gets his Dad to become the team's coach. The strained relationship between Kelly and his Dad is portrayed rather realistically--just like the first BEARS film, BREAKING TRAINING has some emotional moments that one just doesn't expect to find. William Devane plays Kelly's Dad as a blue-collar guy thrust into a unusual situation. Jackie Earle Haley once again gives Kelly Leak far more complexity than the role would seem to need on the surface.

The person who really steals this film is Chris Barnes as the loud-mouth Tanner. Tanner promises the bedridden Lupus that the Bears will win the game for him, and during the team's motel room stay, Tanner is further inspired by a late-night viewing of the "Win One For The Gipper Speech" from KNUTE ROCKNE, ALL-AMERICAN. Tanner even gets to give his own Rockne-like locker room pep talk. But it's during the big game that Tanner really takes the film over. The game is played between an Astros double-header, and officials come on to the field to stop it because the Little Leaguers are taking too long. Tanner, incensed that he cannot keep his promise to win one for the Looper, refuses to leave the field, and leads the officials on a merry chase. This leads to BREAKING TRAINING's most famous scene--Coach Leak starts to lead the crowd in a chant of "LET THEM PLAY!!", and soon everyone in the stands (and various real-life members of the 1977 Houston Astros) are on the Bears' side. I have to admit that whenever I'm watching a baseball game (or at one), whenever a rain delay is about to be called, I have to resist the urge to start shouting "LET THEM PLAY!!"

Special mention has to be made of the Astrodome. In the 1970s, the Astrodome was considered a technological marvel. In today's world of pseudo-retro-quirky ballparks, that's hard to believe, but that's how it was. In BREAKING TRAINING, the Astrodome is almost an actual character. Director Michael Pressman constantly shows it in extreme long-shot, looming over the horizon, and the Dome is even given it's own musical motif. The Bears see the Astrodome as an almost Grail-like quest, and any kid in the 1970s would probably feel the same way. In the Seventies domed sports complexes were looked upon as impressive edifices. I'm no fan of the cookie-cutter ballparks of my boyhood, but I do have to admit that the whole fake-retro stadium era of today is starting to become somewhat generic.

THE BAD NEWS BEARS IN BREAKING TRAINING is certainly not as good as the movie that spawned it, but it's not just a cheap knock-off. It's an entertaining film in it's own right, and it's because the story focuses on a group of kids that are totally real, especially to anyone growing up in that era. If you haven't seen BREAKING TRAINING in a while, or if you've never seen it, I suggest you take the time to seek it out.