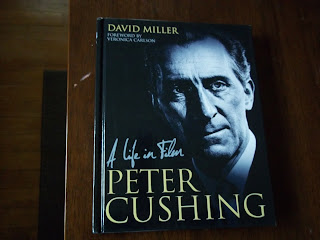 May 26th will be the 100th anniversary of the birth of British actor Peter Cushing. A number of books and film magazine tributes are scheduled to be released in celebration of this. One of the first is PETER CUSHING: A LIFE IN FILM, written by David Miller and published by Titan Books.

This book is actually an updated version of THE PETER CUSHING COMPANION, written by Miller and published by Reynolds & Hearn in 2000. Both books have the same number of pages (192) and the chapters in each begin and end on the same page. The main text--dealing with the life of Peter Cushing--is the same.

What makes A LIFE IN FILM different is the layout and the addition of several more photos. A LIFE IN FILM also has two color photo sections (the original book had no color photos). The highlight of the new photos is a stunning full-page color still of Cushing in costume playing the role of Osric in Olivier's HAMLET. The new book also has a nice collage of Cushing pictures on both front and back endpapers. A LIFE IN FILM also features a new introduction and an afterword. The poignant foreword by Veronica Carlson (who co-starred with Cushing in two films) is carried over to the updated volume.

So...is A LIFE IN FILM worth buying? Well, if you are a major Cushing fan (and I don't think there are any "casual" Cushing fans), you probably already have THE PETER CUSHING COMPANION. If you have the earlier book I wouldn't say you need to get the new one...but I think A LIFE IN FILM is worth getting just for the picture quality alone.

If you do not own A PETER CUSHING COMPANION, and you are a fan of Peter Cushing's (or of British Gothic Horror Films), then A LIFE IN FILM is definitely a worthy purchase. Miller's biography of Cushing is one of the best volumes on the actor, along with Christopher Gullo's IN ALL SINCERITY, PETER CUSHING and Deborah Del Vecchio and Tom Johnson's PETER CUSHING: THE GENTLE MAN OF HORROR AND HIS 91 FILMS. It's ironic that Miller's work has been retitled A LIFE IN FILM--what made the biography stand out was it's extensive look at Cushing's stage and television career. When most writers mention Cushing, it is only in the context of his horror films.