THE VAMPIRE LOVERS On Blu-ray 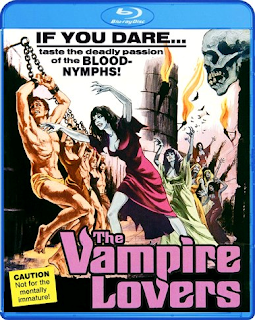 Shout Factory has just released on Region A Blu-ray one of the most famous Hammer horror films of all time, THE VAMPIRE LOVERS. This is the 91 minute British version of the film, which had already been released on DVD as part of MGM's legendary "Midnite Movies" series in 2003.

THE VAMPIRE LOVERS is a fairly close adaptation of Sheridan Le Fanu's classic 19th Century Gothic novella "Carmilla". Hammer co-produced the movie with American-International and Fantale Films. It was Fantale producers Michael Style & Harry Fine, along with writer Tudor Gates, who offered the project to Hammer. The film was made in 1970, and by this time Hammer was able to incorporate the scenes of nudity and vampiric lesbianism that were involved in the script.

Those scenes (which are kind of tame by today's standards) have given THE VAMPIRE LOVERS it's lofty reputation, especially among Hammer fanboys. Ingrid Pitt (who played Carmilla Karnstein) became a horror film legend, despite the fact she was never able to find another role as great as this one.

Ingrid Pitt, even by Hammer's high standards, was a truly stunning woman. But she wasn't the only one featured in the story....there's a full starting rotation of Hammer Glamour girls on display. You get Madeline Smith, Kate O' Mara, Pippa Steele, Kirsten Betts....after seeing all these lovelies being seduced by Ingrid, you can understand why so many classic monster movie fans admire this production.

As for the lesbian angle....personally, I think a vampire is beyond any exact definition of human sexuality. A vampire will seduce (and feed upon) anyone at anytime, if the circumstances permit. And as for Hammer breaking "new ground"....if you want to, you can find a lesbian angle all the way back to 1936 in Universal's DRACULA'S DAUGHTER. Hammer was interested in box office, not social relevancy. 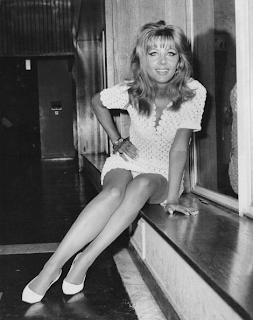 
THE VAMPIRE LOVERS also has a distinguished male cast, including Douglas Wilmer, Jon Finch, George Cole, Ferdy Mayne, and of course the one and only Peter Cushing in a small but pivotal role. All together this is one of the best casts that Hammer ever assembled.

Shout Factory's Blu-ray of THE VAMPIRE LOVERS looks very good...but I wouldn't say it looks spectacular. Sometimes it even looks too good....such as in the early scenes where we see shots of Peter Cushing's manor. With the sharpness of Blu-ray we can see what looks like modern chain-link fencing out past the manor. (The place was actually the Moor Park golf course clubhouse in Hertfordshire.) The extra sharpness also makes some of the set backdrops look even more tatty. The biggest improvement is in the quality of the sound, which is far better than the DVD.

The extras from the MGM DVD are carried over to the Blu-ray. They include a commentary with director Roy Ward Baker, Ingrid Pitt, and writer Tudor Gates. This is certainly worthy of posterity, as unfortunately all three participants have since passed on. But the commentary is a letdown--Pitt was obviously sick when it was being recorded (there are times when she is barely audible) and it is somewhat unfocused. It's too bad Shout Factory didn't try to record a new commentary with someone like Jonathon Rigby...or Kim Newman, or Bruce Hallenbeck, or Ted Newsom, or a dozen other Hammer experts I could name. The other "old" extra is audio of Ingrid Pitt reading passages from the "Carmilla" novella. This has been improved by a showing of stills and scenes from the movie during Pitt's reading.

The Blu-ray does have some new extras. FEMME FANTASTIQUE: RESURRECTING THE VAMPIRE LOVERS is a 9 minute featurette from Ballyhoo Productions, and it covers the film's production history adequately...but as legendary as THE VAMPIRE LOVERS is, the featurette should have been a lot longer. There's also a 20 minute interview with Madeline Smith, who is interesting, informative, and entertaining. (I wish this had been a lot longer as well.) There is also a nice photo gallery backed by musical cues from THE VAMPIRE LOVERS soundtrack, a trailer, and a radio advertising spot for the movie.

There's one thing that really bugs me about the Blu-ray...the case cover art (see above). That's a reproduction of American-International's U. S. movie poster, and it's one of the most insipid promotional designs for any Hammer film. It has nothing to do with the movie...and how can you put THE VAMPIRE LOVERS out on Blu-ray and not put Ingrid Pitt's picture on the front of the case?

THE VAMPIRE LOVERS is one of my all time favorite Hammer films, and I think it may have been Hammer's last truly great film. (And yes, I'm sure all the well-endowed beautiful women in-and not in-nightgowns has something to do with it.) If you have the Midnite Movies DVD, do you have to buy the Blu-ray? I happened to get this Blu-ray for a decent price on Amazon (about the same price I bought the original DVD), so I think it's worth it. Just remember: this film is not for the mentally immature.