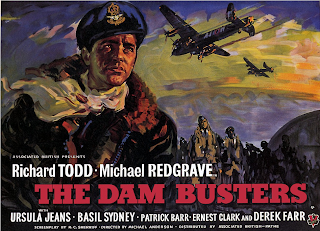 Seventy years ago today, May 16, nineteen modified Avro Lancaster bombers took off from England on a mission code-named Operation Chastise. Their target was three giant dams located in Western Germany. Each plane carried specifically designed "bouncing" bombs that were created for the purpose of breaching these dams, with the expected result being major damage to Germany's Ruhr manufacturing district. This World War II mission became one of the most famous in the conflict's history, and in 1954 a film was put into production dramatizing the event. The result was THE DAM BUSTERS.

THE DAM BUSTERS is considered one of the best war films ever made, and some say it is one of the best British films ever made overall. Today most viewers would probably think the movie is somewhat quaint. It has almost none of the Hollywood-style elements one usually finds in a WWII film. There's no major female role, there's no goofy comic relief, and the film stays very close to the facts.

The first part of the story deals with the creation of the special bombs to be used in the raid. The bombs were the brainchild of British inventor and designer Barnes Wallis, who is played by Michael Redgrave. Redgrave portrays Wallis as a eccentric Englishman--he almost acts as if he's making a new toy instead of a destructive device. The middle section of the story deals with the training and planning of the mission. Real Avro Lancasters were used for THE DAM BUSTERS, and real RAF pilots were used to fly them. The RAF also allowed the film makers to shoot on actual RAF bases, giving the movie a huge sense of authenticity.

Richard Todd (who actually served in WWII--he was part of the D-Day invasion) plays Guy Gibson, who was picked to lead the newly-formed secret 617 Squadron. Todd plays Gibson as a quiet, determined professional--he doesn't give any rousing speeches or make any grand heroic gestures. The rest of the pilots are played by British character actors, and unlike most American war films, there is little attempt made to individualize them. They are men called upon to do a job to the best of their ability.

The climax of THE DAM BUSTERS covers the actual raid, and it still holds up today as a suspenseful sequence, despite the limitations of the special effects of the time. The attack on the dams was a huge inspiration to George Lucas, who used it as a model for the Death Star attack in the first STAR WARS film. If you do watch THE DAM BUSTERS, you'll notice Lucas even used some of that movie's dialogue!

THE DAM BUSTERS is a prime example of the difference between the British war film and the American one. Director Michael Anderson stages everything in a realistic, almost documentary-like manner. There's no showy camera angles or attempts to make things more exciting. There's an incident in the film where Guy Gibson's dog is killed in an accident the day before the mission. This wasn't added by the scriptwriters--it actually happened for real. One must remember that THE DAM BUSTERS was made less than 10 years after World War II ended, and several of the participants were still alive. There would have been a lot of criticism if the movie was far-fetched, especially since the RAF helped in the production.

In the actual Operation Chastise, two of the three dams targeted were breached, causing severe (but temporary) disruption to the German war effort. Eight of the nineteen Lancaster bombers flown in the raid failed to return, and 53 of their crew were killed. Wing Commander Guy Gibson was awarded the Victoria Cross, and numerous other pilots and crew members received various medals and commendations. To this day, military historians debate on how important the Dam Busters mission really was. Because of the flooding that resulted from the breaching of the dams, nearly 1300 people lost their lives (mostly civilians). Some experts believe that the mission did not damage German industry enough, and the cost of so many RAF personnel was not worth the results. The ending of the movie reflects this somewhat. After the mission, Barnes Wallis tells Guy Gibson that if he had known how many men would not have come back, he probably wouldn't have started it. Gibson then says that he has some letters to write (to the families of the men killed in action), and the last thing we see in the film is Richard Todd walking slowly away from the camera into the distance. It's a rather ambiguous and thoughtful ending to a patriotic war film.

There have been rumors that THE DAM BUSTERS will be remade. I certainly hope not. The movie is a product of it's time....a remake today would just be a 21st Century outlook on a 20th Century subject. THE DAM BUSTERS is perfect just as it is.
Posted by Dan Day, Jr. at 1:32 PM