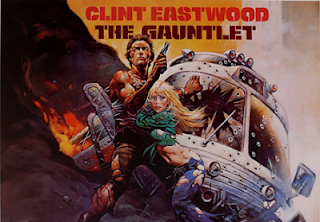 Last night Turner Classic Movies debuted a documentary on Clint Eastwood's movie directing career. It was made by film critic Richard Schickel, a biographer and personal friend of Eastwood. The documentary was okay, but I was kind of disappointed on how most of Eastwood's work in the 70s and 80s was sort of glossed over. There seems to be this idea that Eastwood didn't become a "real" director until UNFORGIVEN. That's a silly idea....Clint Eastwood had been directing films for twenty years by the time UNFORGIVEN came out, and just about all of them were financially successful.
Of course most of them at the time were not critically successful. When I was a kid movie critics judged Eastwood and his films rather harshly. Now he's become a film critic's darling--something I think he probably laughs at. He's always done things in his career that you wouldn't expect, even way back in the Seventies. The critics just didn't shower him with praise for it the way they do now.

Here's a personal list of what I think are five underrated Clint Eastwood movies. It's hard to brand anything Eastwood does as underrated, since he's a cultural icon, and his entire movie catalog is continuously being shown on television--and more than likely always will.

This is a strange, haunting, and atmospheric Southern Gothic, directed by Don Siegel. Eastwood is a Union soldier wounded behind enemy lines in the Civil War. He's found by a young girl and brought to a ladies' school, where a psychological cat and mouse game develops. Eastwood tries to use his masculine wiles to charm the ladies, but it winds up backfiring on him. Geraldine Page plays the school's headmistress, and she and Eastwood match wits very well. A complex thriller, this is certainly no action film, but it's far more gripping than most of Eastwood's output. Clint is very conniving here...but if you were in the same situation, wouldn't you be as well?

This film is based on a novel by Peter Viertel. The novel was a fictional account of Viertel's experiences working on the script of THE AFRICAN QUEEN for famed director John Huston. Clint plays the Huston character, complete with accent. The pseudo-Huston is a narcissistic jerk, and Eastwood's performance is far beyond anything he ever did in a film. The movie is really an examination about macho posturing, and audiences didn't seem to get it (and they still don't). If you want to just see Eastwood shoot a bunch of people, don't watch this. But if you want to see a major star go against the grain, and capably succeed, give this movie a try. One more thing: it was made before UNFORGIVEN.

This movie is always looked at as an over-the-top silly action flick. But compared to the blockbusters of today, it's almost a mature piece of work. Some consider it to be unintentionally funny--but are we laughing at it, or is Eastwood laughing at us? Clint seems to be sending up the whole bad-ass cop genre that helped make him a legend. If it was a send-up, then Eastwood was way ahead of his time, since most movies of today are far more wild and wacky than this one. Sandra Locke steals the show--in fact, Eastwood almost always lets his leading lady get the better of him.

This movie has never been considered one of Eastwood's best. I've always liked it--Eastwood and Shirley MacLaine work very well together. (Once again, I have to point out that old fashioned conservative Eastwood continually lets his female co-stars outshine him.) This Don Siegel Western was based on a story by Budd Boetticher (one can only wonder how he would have directed this) and was originally supposed to star Elizabeth Taylor. There's a number of nice sequences, including one where MacLaine gets Clint drunk so she can pull an arrow out of him. This also features a great Ennio Morricone score.

Eastwood has been quoted as saying that this is his "Frank Capra" picture. It's a nice, charming little film, about a small-time traveling Wild West show. Just like Capra, Clint lets his supporting players shine, and just like a 1930s screwball comedy, the leading female character (Sandra Locke) is a runaway heiress. One could easily imagine this movie being made in 1935 with Gary Cooper and Carole Lombard. Eastwood gives a quietly disarming performance, and the movie is a lot more entertaining than some of his "bigger" projects.

Clint Eastwood has had an amazing career, and he continues to defy expectations. I've watched and enjoyed his movies most of my life. He is a true American cinematic legend.
Posted by Dan Day, Jr. at 3:47 PM