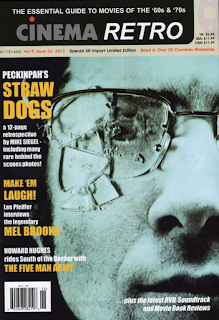 It's rather obvious that print media is not in the best of condition. A number of newspapers and magazines have gone to an all-digital format. It wasn't that long ago that film buffs had a huge number of interesting publications to choose from, but those are becoming fewer and fewer.

One of the best movie magazines still around is CINEMA RETRO. The focus of CR is movies made in the 1960s and the 1970s. This gives the magazine a focused identity, and at the same time an almost unlimited choice of subjects to cover. CINEMA RETRO certainly deals with famous and successful films of the period, but they also cover all sorts of overlooked gems and cult favorites. The lesser know movies are looked at in a expansive and scholarly manner--there's enough information in the average issue of CR to fill an expensive hardcover book.

What really sets CR apart is the photo quality. Each issue includes a plethora of rare stills and behind-the-scenes photos from various productions--some of them never published before. It's amazing how CR's staff can find pictures from famous movies that even the most hard-core film buff has never seen.

Just about all of the various writers & contributors for CR are published authors or film experts themselves. Because of this the articles are filled with detail and perceptive analysis. You get far more than just a "hey this movie is really cool!"

The latest issue of CINEMA RETRO, #26, features a cover story on the making of Sam Peckinpah's STRAW DOGS, still one of the most disturbing movies ever made. As usual for a CR article, there's many rare behind-the-scenes photos, including some rather revealing ones of actress Susan George. Among the other issue's highlights: an interview with Mel Brooks; a look at the Spaghetti Western THE FIVE MAN ARMY; coverage of Mae West's SEXTETTE and the World War II actioner MOSQUITO SQUADRON; and some of the best book, DVD, and CD reviews in the business.

With each issue of CINEMA RETRO you never know what you are going to get--that's what makes it one of the best film magazines still available. I'm sure that a lot of people who read my blog are already familiar with CINEMA RETRO, but if you are not you should really check it out.
Posted by Dan Day, Jr. at 8:51 AM