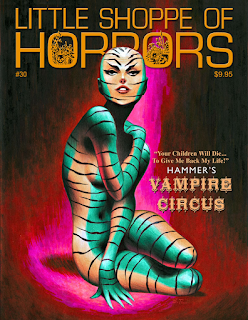 The latest issue of LITTLE SHOPPE OF HORRORS is now available. Founded, edited, and published by Richard Klemensen, LSOH has for 41 years been the pre-eminent guide to Britain's Hammer Films. To call it a "fanzine" is somewhat of a misnomer--that word usually suggests something non-professional, and LSOH is certainly not that. "The Journal of Classic British Horror Films" continues to be more impressive than most mass-market magazines.

Every issue of LSOH contains a number of excellent writers & artists who have an abiding love, and a great knowledge of, the entire Hammer Films catalogue. If you have ever read any books, magazines, or internet stories on any Hammer production, chances are the majority of the information was "borrowed" from an issue of LSOH. Dozens and dozens of performers, screenwriters, directors, and film technicians have been interviewed on the pages of LSOH...some of then for the only time in their careers.

Usually an issue of LSOH will focus on one particular Hammer movie. #30 spotlights VAMPIRE CIRCUS, which I have to admit is not one of my favorites (that's a post for another day, if anyone's interested). The movie is covered in exhaustive detail, with a production analysis by Hammer expert Bruce Hallenbeck; interviews with producer Wilber Stark, screenwriter Judson Kinberg, and director Robert Young; talks with cast members Domini Blythe, Lalla Ward, Robert Tayman, John Moulder-Brown, and Anthony Higgins; dozens of rare stills and behind-the-scenes photos; and a huge gallery of VAMPIRE CIRCUS-inspired artwork by the likes of talented pros such as Bruce Timm, Neil Vokes, Mark Maddox, Adrian Salmon, and many others.

Some would say that so much coverage for a mediocre horror film is overkill, but that is one of the strengths of LSOH. If this amount of information was put into a hardcover book someone would probably charge $30 for it. The stories behind the making of these types of movies are always fascinating, and no matter how crazy a Hammer fan you may be, you will always learn new facts by reading LSOH.

Richard Klemensen has recently been wondering how long LSOH should continue, especially in an era when so many off-beat publications have fallen to the wayside. LSOH has lately branched out to covering non-Hammer British productions. This has caused some bit of controversy in the monster movie fan community, but recent LSOH issues dealing with movies such as DANCE OF THE VAMPIRES and THE ABOMINABLE DR. PHIBES are among LSOH's best. I certainly hope LSOH sticks around for a while. I'm sure every real British horror film fan is aware of LSOH, but those that don't buy it are missing out.