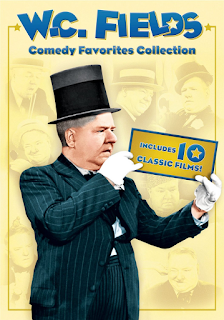 My latest DVD purchase is the W. C. FIELDS--COMEDY FAVORITES COLLECTION from Universal. This set features 10 of the great comedian's films:

Disc One:
INTERNATIONAL HOUSE
IT'S A GIFT
YOU'RE TELLING ME
THE OLD FASHIONED WAY

Disc Three:
MY LITTLE CHICKADEE
THE BANK DICK
NEVER GIVE A SUCKER AN EVEN BREAK

These movies had all been released before on two separate W. C. Fields box sets, but now they are on one set.....and I got it on Amazon for $13.99 before shipping. That's a pretty good deal, and I feel bad for those who had already bought the earlier sets (when they came out they were a lot more expensive).

Any classic comedy fan would want to get this. It doesn't have any of Fields' silent movies, but it does contain what is probably his best sound work. INTERNATIONAL HOUSE is a wild pre-code extravaganza, starring (among others) Rudy Vallee, George Burns & Gracie Allen, Bela Lugosi, and Cab Calloway. IT'S A GIFT and THE BANK DICK, in my opinion, are two of the funniest comedies ever made. MY LITTLE CHICKADEE is famous for the one and only pairing of Fields and Mae West.

The discs in the set are one-sided--usually Universal uses double-sided discs in their sets. If you have a large DVD collection you more than likely know that sometimes there are some playback issues when it comes to Universal multi-film sets. This is because Universal tries to cram as much stuff as possible on a single disc. That's the main reason why this set is so cheap. I haven't had any playback issues (yet) but it is a factor to be aware of. If you don't own any of these titles already, and you can still get a good price on the set, this is definitely one to pick up.