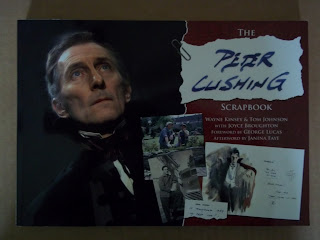 What's different about this book is that it is more than just a simple biography--it's jam-packed with photos of Cushing's personal items and mementos. There's also a huge selection of Cushing's drawings, sketchings, and portraits (he was an artist as well as an actor). All of Cushing's feature films are covered, as well as his stage and television career.

Among the items represented in the book are: Peter's personal copy of PRIDE & PREJUDICE; the walking stick he used while playing Sherlock Holmes in the Hammer version of THE HOUND OF THE BASKERVILLES; and his own copy of Bram Stoker's DRACULA. The latter has to be one of the greatest pieces of monster movie memorabilia ever, considering the owner was the greatest Van Helsing in movie history.

This is more than just another monster movie/Hammer themed product, however. The sheer volume of annotated script pages show how painstaking Cushing took his work--most of the pages reproduced here have more of the actor's hand-written notes than actual script! Even the scripts from Cushing's lesser films have the same attention to detail. Peter Cushing was a man who gave the utmost of his talent no matter what the project might be.

There is also a huge amount of personal correspondence included, which shows the human side of the man. The wealth of material here is simply overwhelming, thanks to the donations of various Cushing fans and the help of Joyce Broughton, who was Mr. Cushing's secretary and personal friend.

The book also features a foreword by George Lucas (who directed Cushing in STAR WARS) and an afterword by Janina Faye (who appeared with Cushing in HORROR OF DRACULA).

I have to admit that when I first flipped through this book, I had a tinge of sadness. Sadness because after seeing all the artistry and natural talent Peter Cushing had, it dawned on me that here was someone who could have pre-planned his own film, wrote the script for it, drew all the storyboards, designed the costumes, and directed & acted in it as well. Unfortunately he never got that chance.

Peter Cushing gained world-renowned fame by starring in horror films, but he was much more than just a monster movie star. THE PETER CUSHING SCRAPBOOK represents all the facets of Cushing's life, and shows what a unique individual he truly was.

THE PETER CUSHING SCRAPBOOK is limited to a printing of 2000 copies. For price and ordering information, go to www.peverilpublishing.co.uk.