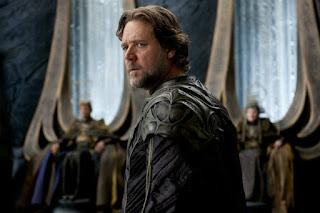 MAN OF STEEL is another "origin" story--as a matter of fact, the film literally begins with Kal-El's birth. Because of the nature of the screenplay, one has to compare it with Richard Donner's SUPERMAN...and the comparison is somewhat lacking. MOS's Krypton sequence sets the stage for what is to follow--there's plenty of explosions, CGI destruction, and annoying digital camera moves. For all the sound and fury, Zach Snyder's version of Krypton falls way short of Richard Donner's elegant simplicity.

The middle part of the story looks at Clark Kent's upbringing. It's here that Snyder and Nolan employ a flashback-flashforward technique that just confuses the audience. Kevin Costner is okay as Pa Kent, but he's nowhere near as effective as Glenn Ford was in the role. Eventually we get to the main plot, involving Kryptonian villain General Zod. Terence Stamp played Zod back in the Christopher Reeve era, and he became a pop culture icon. Michael Shannon's Zod is just another comic book movie bad guy....and in the last few years we've had dozens and dozens of them. The new Zod is nothing special.

Once the fight scenes start, MAN OF STEEL becomes one big action sequence after another. There's so much CGI-filled spectacle that after awhile it just becomes par for the course. The subplot about Clark Kent/Kal-El choosing to be the man he is destined to be gets lost in all the mayhem. There's a sense of humanity, a sense of heart, that's missing here. What heart there exists is supplied by Russell Crowe as Jor-El, who by far gives the best performance. Amy Adams is now on the top of the A-list, but she's not really my idea of Lois Lane. Henry Cavill is good in the title role, but you just don't get the feeling that you know this Superman well enough. Out of all the major comic book heroes, Superman is the one that is easiest to understand. Superman knows exactly who he is, and exactly what he is supposed to do. He really does believe in truth, justice, and the American Way--and that's something that is unfortunately considered politically incorrect in our day and age. It's why movie makers have never really gotten Superman right (the 1978 film did a pretty good job, but it was all downhill from there).

The big problem with MAN OF STEEL is that it starts at Superman's beginning...so we get a Superman who is "incomplete". Superman (in my opinion) shouldn't be portrayed as conflicted, or unsure of himself. SUPERMAN RETURNS made the same mistake in having a less-than-confident hero (don't get me started on that movie, please). When I go to see a movie about Superman, I want to see him ACT like Superman. I want to see the ultimate super hero. MAN OF STEEL seems afraid to show that. Maybe there's something about honest decency and true responsibility that the modern-day entertainment industry will never understand.

The other thing working against MOS is the fact that there are so many comic book movies being made. They're all starting to look alike. The final battle in MAN OF STEEL is set in Metropolis, and it bears a certain resemblance to Loki's attack on New York in THE AVENGERS. The major studios are churning out comic book tales as fast as they can, because they make so much money, but they're also killing off the Golden Goose. All the supposed spectacular elements of MAN OF STEEL don't seem so grand when you've seen them all before in one form or another.

If DC Comics really wants to be like Marvel when it comes to money-making movie blockbusters featuring comic superheroes, they need to go to the people who have already successfully visualized the DC Universe. I've said this before but I'm going to say it again...Bruce Timm and the Warner Animation team know the DC charcaters better than anybody. Some studio needs to give Timm and his associates a $200 million dollar budget and let them go. And please, don't tell me that "animation and a live action film are different things"....there's so much CGI in MAN OF STEEL you may as well call it an animated movie.

It amazes me how hard it is to make a decent movie about a character as iconic as Superman. If all these brilliant filmmakers would just take the time to actually pick up a comic book and read it....nahh, that's too easy.


Here are links to some of my other comic book movie-related posts: