RETURN OF THE JEDI--30th Anniversary 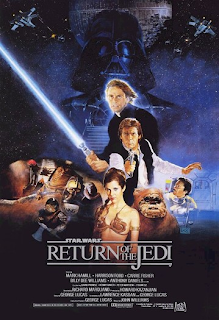 This month marks the 30th anniversary of the theatrical release of RETURN OF THE JEDI. Out of the three original Star Wars films, JEDI is considered by nearly everyone to be the least. The biggest reason is the Ewok factor, but even if you take away the outer space teddy bears Star Wars fans will still find plenty of reasons to complain about this film.

RETURN OF THE JEDI is the longest of the first three Star Wars movies in running time, but it feels like the shortest. Everything in the story seems rushed to get to the big climax. There isn't much of a plot--the heroes get together to rescue Han Solo from Jabba the Hutt, then they go on a mission to help destroy another Death Star. And that's it. That's almost thirty minutes worth of a Christopher Nolan film.

JEDI in reality is a remake of STAR WARS. George Lucas never liked the Mos Eisley/cantina scenes in the first film, so we get a far more elaborate Tatooine sequence this time around. Lucas was also never satisfied with the first Death Star battle....so we get a even bigger space battle, with more impressive special effects. The scene where Mon Mothma lectures the Rebels on the plan to destroy the new Death Star is almost an exact remake of a similar scene in the first film. People who complain that the only thing George Lucas does now is mess with his own stuff don't seem to realize that Lucas was doing it during the original trilogy.

Why would the Empire even build another Death Star? Was it already under construction when the first one blew up, and they decided to go ahead and finish it? Or is the Empire run by American politicians, who enjoy wasting blood & treasure? The new Death Star idea is pretty lazing plotting. You really can't say that about the second lightsaber duel between Luke Skywalker and Darth Vader, simply because they had to have some sort of confrontation at the end. But Luke & Vader's duel is nowhere near as iconic as the one in THE EMPIRE STRIKES BACK.

And there's the Ewoks. Apparently Lucas originally wanted a giant battle involving Wookies, but he decided it would be better if a less-powerful race of indigenous beings defeated the Empire. (Does this mean the Ewoks are equivalent to the Viet Cong?) The Ewok battle is very well done, and it has a lot of neat gimmicks...but it once again underscores how the average Imperial Stormtrooper couldn't guard a three-legged dog. When the Emperor says "a legion of my best troops" is stationed on Endor, you have to ask yourself, "What are his worst troops like?"

One of the things I always notice whenever I watch JEDI is how there is almost no real conversations between any of the characters about anything. Lucas accelerated the pace so much in this movie that no one gets a chance to make any real comment about what's going on. Nobody goes to see a Star Wars movie for the dialogue...but in EMPIRE, there were actual conversations, and the characters were allowed to play off one another. In JEDI 99% of the dialogue in the script is expository.

The generic dialogue hurts especially during the scene where Luke reveals to Leia that not only is Darth Vader his father, but Leia is his sister. This is one of the most important moments in Star Wars history, and it falls flat. It's not the fault of actors Mark Hamill and Carrie Fisher--the scene is staged and scripted in a desultory fashion. Contrast this scene with the Han and Leia farewell in the carbon freezing chamber in EMPIRE. There you have the difference between JEDI and the other two films.

Another character thought: Han forgives Lando pretty darn easily (there should have been some type of discussion between them on what happened at Cloud City). There was a sequence shot, but not put into the final edit, of the main cast talking to one another before leaving Tatooine. The sequence was cut because it was staged during a sandstorm, and all the fake wind, sand, and sound drowned out the actors. (Why would you stage an important dialogue exchange during a sandstorm?)

We can't talk about JEDI without mentioning the waste of Boba Fett. We finally get to see him in a major fight scene, and he winds up taking more pratfalls than Shemp Howard. George Lucas' sense of humor (or lack of) shows up all too frequently in this picture.

There is, however, a lot of good things about RETURN OF THE JEDI. There's a number of new creatures (and of course all of them were available at your local Kmart or toy store in the summer of 1983). The Rancor scene is cool, mainly because of the stop-motion animation involved. The second Death Star battle is simply spectacular. Ian McDiarmid has been accused of being too over the top as the Emperor, but he had to be...he's the boss of Darth Vader. I always liked the Ewok song at the end--George should have never removed it. And you might have noticed that Carrie Fisher wears a certain costume in the early part of the film, and that Admiral Ackbar says a certain line during the Death Star battle.

My favorite scenes in JEDI? One of them is when Luke turns himself in to the Imperial base on Endor. Luke and Darth Vader confront one another, and this is the only scene in JEDI where there's a real meaningful conversation. The mood is dark and foreboding, and Hamill does a great job here--it's always been popular to make fun of Hamill's acting, but in JEDI I think he gives his best performance. When Luke says that Vader won't take him to the Emperor, and he turns his back, at that moment Vader turns on Luke's lightsaber...and the sound of it made me jump out of my seat when I saw it at the theater in 1983. (I thought Vader was going to take him down right then and there!)

The other scene is when Luke, having escaped the Death Star with Vader's body, lands on Endor and places his late father on a funeral pyre. Backed by John Williams' music, it's one of the greatest moments in Star Wars history.

I first saw RETURN OF THE JEDI at the now-demolished Forum Theater on Old U.S. 31 in South Bend, Indiana. It's hard to define the excitement of seeing what was then considered the very last Star Wars film. It's one of those movie moments I'll always treasure....and those moments are coming fewer and fewer. RETURN OF THE JEDI may be considered the red-headed stepchild of the original Star Wars trilogy, but it now has a permanent place in the iconography of popular culture.

And look at it this way--it ain't THE PHANTOM MENACE.