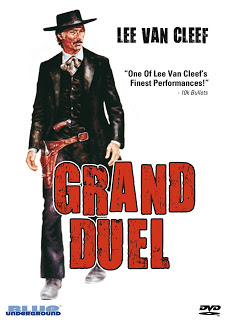 Before he agreed to star in Sergio Leone's FOR A FEW DOLLARS MORE, Lee Van Cleef had spent most of his Hollywood career being killed on-screen by just about every leading man in the business--including the likes of Rock Hudson, Randolph Scott, and Kirk Douglas. Van Cleef also made appearances in such TV shows as "Bonanza" and "The Rifleman". Western fan Sergio Leone had remembered all these roles, and more importantly, remembered Van Cleef's presence. After FOR A FEW DOLLARS MORE was released, Van Cleef's career underwent a revival, especially in Europe, where he became a huge star.

Van Cleef went on to play in a number of spaghetti westerns, and each role was almost always a variation of his "Colonel Mortimer" of FOR A FEW DOLLARS MORE. The typical Van Cleef character was a taciturn bounty hunter (or former lawman), someone who was proficient with any type of firearm, and who usually acted as a sort of mentor to a younger, more emotive co-star. Throughout Van Cleef's Euro-western career he would even continue to wear his "Colonel Mortimer" costume--black Western suit, black hat, and black overcoat.

GRAND DUEL fits all the requirements for a Van Cleef spaghetti western--he's got the suit, he's a former sheriff that can outduel anybody, and he's paired with a younger actor (Alberto Dentice, billed here as "Peter O'Brien"). Dentice plays Philipp Wermeer, who is wanted for the murder of Old Man Saxon, the head of a corrupt and powerful family that runs--what else--Saxon City. Ex-Sheriff Clayton (Van Cleef) knows who really committed the crime, and most of the film is made up of Philipp and Clayton trying to outwit the Saxons.

GRAND DUEL is fairly straightforward for a spaghetti western. There's very little of the wildness and wackiness that makes the genre so entertaining. One of the Saxons does has some weird attributes--he's got a pockmarked face, he dresses entirely in white, and he wears a scarf. And, in the immortal words of Eddie Murphy....he ain't the most masculine guy in the world.

There are some very well-edited gun fights, but the violence quotient is pretty tame compared to most examples of this type of film. (There is, however, a massacre of innocent townspeople--what would a spaghetti western be without one?) GRAND DUEL is professionally done (it was directed by Giancarlo Santi, who worked with Sergio Leone) and worthy of a look, but it is not a great film, or even a great spaghetti western film.

This movie has gotten some notice in recent years due to Quentin Tarantino using the movie's title theme on the KILL BILL: VOLUME ONE soundtrack. On the KILL BILL soundtrack CD, this theme is credited to Luis Bacalov; on this DVD version of GRAND DUEL, the music score is credited to Sergio Bardotti. Trying to find "official" information on any non-Leone spaghetti western is like trying to find an honest person in Washington D. C.. Nearly every European oater has about five different titles, five different running times, five different cast & crew credits, etc.

This DVD of GRAND DUEL comes from Blue Underground, a company that has released numerous rare cult titles to home video over the years. The picture is in anamorphic 2:35 widescreen and looks great. The sound is excellent as well--of course the film is dubbed in English. The running time here is 94 minutes....who knows if it is the full version (see comment above). The extras are a commentary by Euro-western enthusiasts C. Courtney Joyner and Henry Parke, a theatrical trailer (in which the title is THE BIG SHOWDOWN instead of GRAND DUEL), and various trailers for other Blue Underground spaghetti westerns.