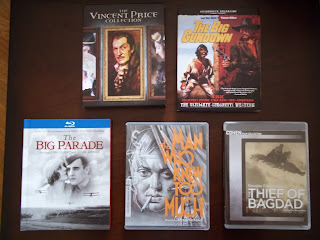 Here's my list of the best home video releases of 2013. Just remember, I'm picking only from the discs that I bought in the last year....and even I can't buy everything.

It seems now that most of the big movie home video news concerns product being upgraded to Blu-ray. Very little product now is being debuted on DVD or Blu-ray for the very first time--the studios are taking their most famous films and putting them in extra-special editions, or they are letting other companies like Shout Factory and Twilight Time do the work for them. I'll discuss this further in a future blog about one of the Criterion Blu-rays I have pre-ordered.


There were still plenty of opportunities for me to spend my hard-earned money in 2013. There were four movies on this list that I never actually owned before on DVD or Blu-ray (I never had the 1934 THE MAN WHO KNEW TOO MUCH on DVD because all the versions of it were so lousy).


1. THE VINCENT PRICE COLLECTION (Blu-ray) from Shout Factory and MGM
I wrote a full blog about this in November. A jam-packed set, with six of Vincent Price's greatest films, all looking better than ever on Blu-ray. So many extras I still haven't gotten through them all yet.

2. THE BIG GUNDOWN (DVD/Blu-ray) from Grindhouse Releasing
I just wrote about this yesterday! Any home video release that includes a CD of a Ennio Morricone soundtrack deserves accolades. Grindhouse also brought out this year the DVD/Blu-ray of CORRUPTION, where the extras were far more impressive than the film.

3. THE BIG PARADE (Blu-ray) from Warner Home Video
One of the greatest silent films ever made, and one of the few worthy major studio home video releases of 2013. The Blu-ray format is starting to become the silent film's best friend (which is rather ironic, when you think about it). I wrote a full blog on this in October.

4. THE MAN WHO KNEW TOO MUCH (Blu-ray) from Criterion
Of course there's going to be at least one Criterion title on this list. But even if you took away all the usual Criterion bells and whistles, this would still deserve high praise simply because it gives the home viewer a great-looking print of one of Alfred Hitchcock's most famous (and important) films. I wrote a full blog on it in January.

5. THE THIEF OF BAGDAD (Blu-ray) from Cohen Media
Another legendary silent film gets an impressive Blu-ray release. Cohen also came out with a Blu-ray of D. W. Griffith's INTOLERANCE, which I've heard great things about. I wrote about this one in March.