THE BIG GUNDOWN On Blu-ray 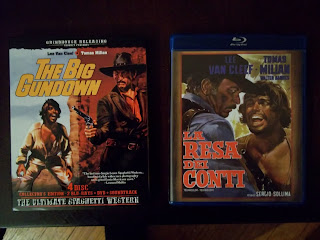 Grindhouse Releasing has just come out with a magnificent DVD/Blu-ray version of the cult spaghetti western THE BIG GUNDOWN (also know as LA RESA DEI CONTI).

THE BIG GUNDOWN was made before Sergio Leone's THE GOOD, THE BAD, AND THE UGLY, but it was released after that seminal film. THE BIG GUNDOWN features a number of people who had worked with Leone in the past, including actor Lee Van Cleef, producer Alberto Grimaldi, screenwriter Sergio Donati, and composer Ennio Morricone.

This movie was obviously influenced by the Leone Euro-westerns (the title credits for THE BIG GUNDOWN are strikingly similar to THE GOOD, THE BAD, AND THE UGLY), but it is not just a cheap ripoff. Director Sergio Sollima gives THE BIG GUNDOWN a very stylish, professional look--it could even pass as a American western. There's plenty of violence and some extreme elements, but this picture is nowhere near as outlandish as the usual spaghetti western would wind up being in a few years time.

The story concerns Jonathan Corbett (Lee Van Cleef), a legendary bounty hunter on the trail of the wily bandit Cuchillo (Tomas Milian), who is accused of the rape and murder of a young girl. Corbett eventually learns there's more to the story than meets the eye, leading to a showdown with the corrupt magnate (Walter Barnes) who was trying to convince Corbett to run for U. S. Senate.

THE BIG GUNDOWN is considered by many to be a "political" western (all the extras on this DVD/Blu-ray package refer to this time and time again). Personally I feel it's not as "revolutionary" as people say it is. The charismatic bandit being falsely accused of terrible crimes to cover up larger corruption is an old movie plot device (heck, it's the basis of the Robin Hood legend). There have always been evil rich guys in American western films--I think THE BIG GUNDOWN gets the political reputation more because it was made by Europeans in the 1960s.

Having said that, it is a very good and a very well made film. Van Cleef is re-doing his "Colonel Mortimer" role from FOR A FEW DOLLARS MORE, and he's co-starring with a younger and more volatile actor (something Van Cleef did in just about every Euro-western he wound up making). Tomas Milian makes a big impression as Cuchillo (he's sort of like a younger version of Eli Wallach's Tuco in THE GOOD, THE BAD, AND THE UGLY). Milian and Van Cleef play off of each other very well, and Milian would go on to star in many other spaghetti westerns by himself.

There's a ton of extras, including DVD-ROM content on the DVD; interviews with Sergio Sollima, Sergio Donati, and Tomas Milian; an audio commentary by film journalists C. Courtney Joyner and
Henry C. Parke; a booklet featuring liner notes by Joyner and Euro-music expert Gergely Hubai; and still galleries, trailers, and TV spots. The Blu-ray for the Italian version of the film has a music-only track featuring Morricone's score in stereo, and it also has a text commentary discussing Morricone and the score. (NOTE: The Italian cut of the film is not dubbed in English, but it does have English subtitles.)

That's an amazing amount of material for a spaghetti western--some might say that a movie like this doesn't deserve such coverage, but I think it's great that Grindhouse Releasing has put together a set like this. If you are wondering what the visual quality of the Blu-rays are, it is excellent. If you are any type of spaghetti western fan, this is definitely a must-have...I'm sure there will be some who will buy this just for the Morricone soundtrack CD alone. Without doubt one of the best DVD/Blu-ray releases of 2013.
Posted by Dan Day, Jr. at 12:43 PM