THE WHIP AND THE BODY On Blu-ray 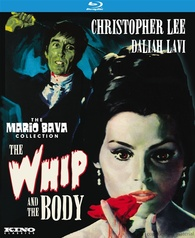 I started getting interested in the film career of Christopher Lee as a teenager. At the time (the mid-1980s) there were still a number of Lee's movies that were just about impossible to see, or have any accurate information on. One title that I assumed had to have been one of the sleaziest Eurotrash films imaginable was THE WHIP AND THE BODY (1963), directed by the legendary Mario Bava. The few details that I could glean about it were that it was supposedly steeped in sadomasochism, and it had been heavily censored wherever it played.

After finally seeing the film for the first time over a decade ago (thanks to VCI Home Video's DVD), I found THE WHIP AND THE BODY to be a well-mounted, dark, Gothic ghost/love story....highly unusual, but nowhere near as nasty as I had been lead to believe. THE WHIP AND THE BODY is now available on Blu-ray through Kino Lorber.

Christopher Lee plays Kurt Menliff, the disreputable son of an aristocratic family. At the beginning of the film Kurt returns to his family's ancestral castle, supposedly because of hearing about his brother's wedding. The brother has married Nevenka (Daliah Lavi), an old flame of Kurt's. Soon after his arrival Kurt finds Nevenka alone on a beach near the castle. Nevenka tries to ward him off with her riding crop, but Kurt grabs it and starts whipping her--and soon Nevenka shows pleasure at the act.

That night Kurt is killed by an unknown assailant. After a burial in the family crypt, Nevenka starts to see visions of Kurt...and soon the whip turns up again as well.....

THE WHIP AND THE BODY (also known as LA FRUSTA E IL CORPO and WHAT!, the title it was given in America) really has very little gore and violence in it at all (there are far worse things being shown on American prime time television). It doesn't have much of a plot either--this is a film that relies on mood and atmosphere. It's a perfect showcase for the rich visual style of Mario Bava. All the Gothic flourishes are present and accounted for. Some have called this tale Mario Bava's version of a AIP/Roger Corman/Edgar Allan Poe movie--personally I think Bava is a way better stylist than Corman.

Christopher Lee gets killed off about twenty minutes in the story, but he remains a overwhelming presence throughout. The role of Kurt Menliff definitely calls for an actor of Lee's stature. In this straight guy's opinion, Lee never looked more dashing on screen--he and the exquisitely beautiful Daliah Lavi make one of the best looking (and most dysfunctional) screen couples of all time.

As for Lavi herself, she does very well in a extremely complex and challenging role. Nevenka is a woman who fears and desires Kurt all at the same time, a woman with some rather extraordinary issues. She isn't just the standard Gothic romantic heroine. If Bava had cast, say, Barbara Steele as Nevenka, the ending (which I won't reveal here) would have been rather obvious.

Now, as to the Blu-ray....Kino's print of THE WHIP AND THE BODY is taken from a French version of the film (the onscreen title is LE CORPS ET LE FOUET). The picture on this Blu-ray looks darker than on the VCI DVD. The VCI DVD was non-anamorphic, and the Blu-ray is a lot sharper....but I felt that the colors on the Blu-ray were not as vibrant as on the DVD.

The only extra is carried over from the VCI release. It is the superlative audio commentary by VIDEO WATCHDOG editor (and Bava biographer) Tim Lucas. The Blu-ray has three dialogue tracks: English, Italian, and French (note that Christopher Lee's voice is not heard in any of them).

For those who already own the VCI DVD of this title and want to know if the Blu-ray is worth getting, I would say that it is, simply because it is in anamorphic widescreen. If you are not sure of purchasing this, you may just want to wait awhile--Kino usually has discounts on product that has been out after a period of time, and you may be able to catch a good price on it. I think Christopher Lee and Mario Bava fans will certainly want to pick this up, and for those of you who have never seen THE WHIP AND THE BODY, don't be put off by the exploitative title. It's worth viewing for any purveyor of weird cinema.