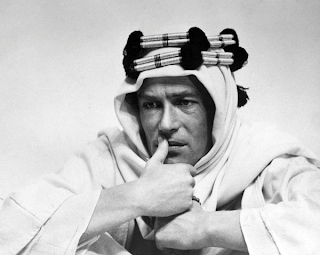 Today marks the passing of another screen legend--the acclaimed Irish-British actor Peter O'Toole. O'Toole was nominated for a Best Actor Oscar eight different times, and he never won once.

O'Toole of course will always be remembered for his portrayal of T. E. Lawrence in director David Lean's monumental LAWRENCE OF ARABIA. It was the role that brought him world-wide renown, but in a way also defined the rest of his movie career. O'Toole took on a huge undertaking as Lawrence--he's on the screen for almost four hours, and he has to hold up a massively epic production. Yet despite this O'Toole's Lawrence is endlessly fascinating, a great historical figure who at the end of the film remains unreachable to the audience.

O'Toole would spend the rest of his time on the screen playing many Lawrence-like characters--powerfully charismatic men, men who have a bit of mystery about them, and seem bent on a path of self-destruction. O'Toole was more of a great actor than a great star. As an actor he had a quirky, unusual aspect about him. Even when he was playing a "normal" role (which wasn't very often), he didn't seem normal. O'Toole might have made a lot more famous films if he had been more "mainstream"....but then he wouldn't have been Peter O'Toole.

Peter O'Toole belonged to a group of actors from the United Kingdom who first gained attention in the late 1950s and early 1960s--a group that included Albert Finney, Laurence Harvey, Richard Harris, Richard Burton, Michael Caine, and Sean Connery. The accomplishments of that group are numerous and legendary. I highly doubt we will remember "The Brat Pack" in the same way.

If you spend any amount of time on the internet, you know that every single day, some one who has appeared in movies or TV passes away. It gets kind of depressing after awhile, but maybe if Peter O'Toole becomes a trending topic, a person who has never heard of him will go out of their way to find out more about the man and his work as an actor.