There were dozens and dozens of beautiful women that appeared in the Hollywood film productions of the 1930s and 1940s. Trying to choose the best-looking one of them all is a hopeless task, but no one would put up much of an argument if you picked Linda Darnell.

Darnell was simply drop-dead gorgeous, and she's the star of FOREVER AMBER, recently released on DVD-R by the Fox Cinema Archives.

FOREVER AMBER (1947) is based on a novel written by Kathleen Winsor. The book was apparently considered quite salacious at the time and gained a fair amount of notoriety. 20 Century-Fox bought the rights to the novel, and tried to make it into a historical romance epic along the lines of GONE WITH THE WIND. 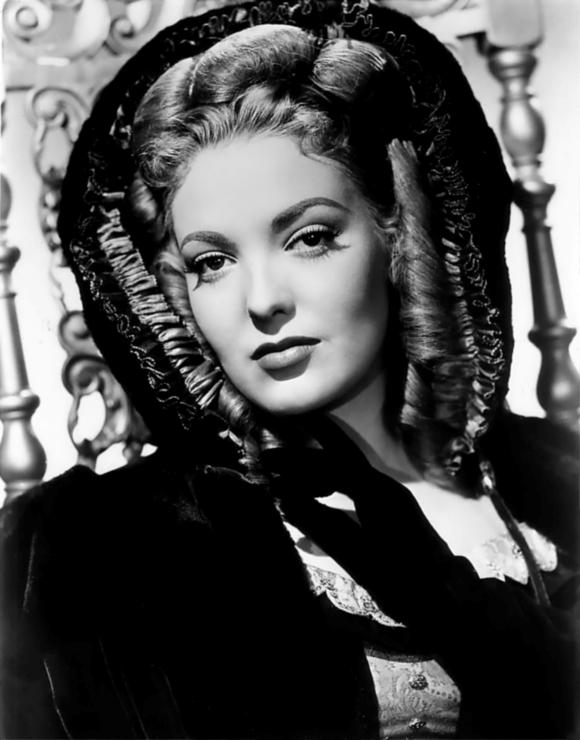 FOREVER AMBER is set in 17th Century England. The attractive and vain Amber wants to leave her home and her adoptive Puritan parents and travel to London. She attaches herself to mercenary Bruce Carlton (Cornel Wilde), makes it to London, has a child by Carlton (who leaves her to go to sea), and goes from one escapade (and man) to another--all the while still in love with Carlton, and scheming to somehow get back to him.

It's quite easy to tell that 20th Century-Fox spent a lot of money on this movie. The costumes, the sets, the production design, are all worthy of a first-class, prestigious film. The cinematography (by Leon Shamroy) is excellent, as is the music score, which was written by David Raksin. The screenplay covers such material as a swordfight duel, the Plague, and the Great London Fire.

However FOREVER AMBER comes nowhere near the class of GONE WITH THE WIND. 17th Century England (at least as depicted in this film) is not as interesting as the American Civil War, and Amber St. Clair is no Scarlett O'Hara. That's not the fault of Linda Darnell--she does the best she can, but Amber's actions seem silly instead of provocative, and Cornel Wilde is a bit underwhelming as the romantic hero (one wonders why Amber is so obsessed with him). FOREVER AMBER is really just a historical romantic drama, and there's nothing very explicit about it (especially to a 21st Century audience). The movie is also 138 minutes long, which is rather unusual for a film made in the 1940s.

FOREVER AMBER does have an impressive supporting cast, including Leo G. Carroll, Jessica Tandy, Richard Haydn, and Ann Revere. The performer who really steals the show is George Sanders as the acerbic King Charles II. Sanders is so good, one wishes that the movie had been about him.

This movie is recommended for Linda Darnell fans. Most of her best work was in supporting roles in such films as HANGOVER SQUARE, FALLEN ANGEL, and MY DARLING CLEMENTINE, where in each one she played a sultry temptress who is punished for her "sins" by being killed off in the story. FOREVER AMBER gives Darnell a lead showcase all her own, and she looks stunning throughout the entire picture. She also gets about 50 costume changes. Some have blamed Darnell for the movie's lack of success (it did not do well at the box office or with critics when released), but it is not her fault.

A Technicolor movie like FOREVER AMBER really needs to be remastered and put on Blu-ray. The DVD-R picture quality is fine, but the colors are a bit faded. There are no extras. It's too bad a company like Criterion did not put this out on home video--they would have included a fair amount of material detailing the troubled history of FOREVER AMBER from book to screen.