GODZILLA VS. THE SEA MONSTER (EBIRAH--HORROR OF THE DEEP) On Blu-ray 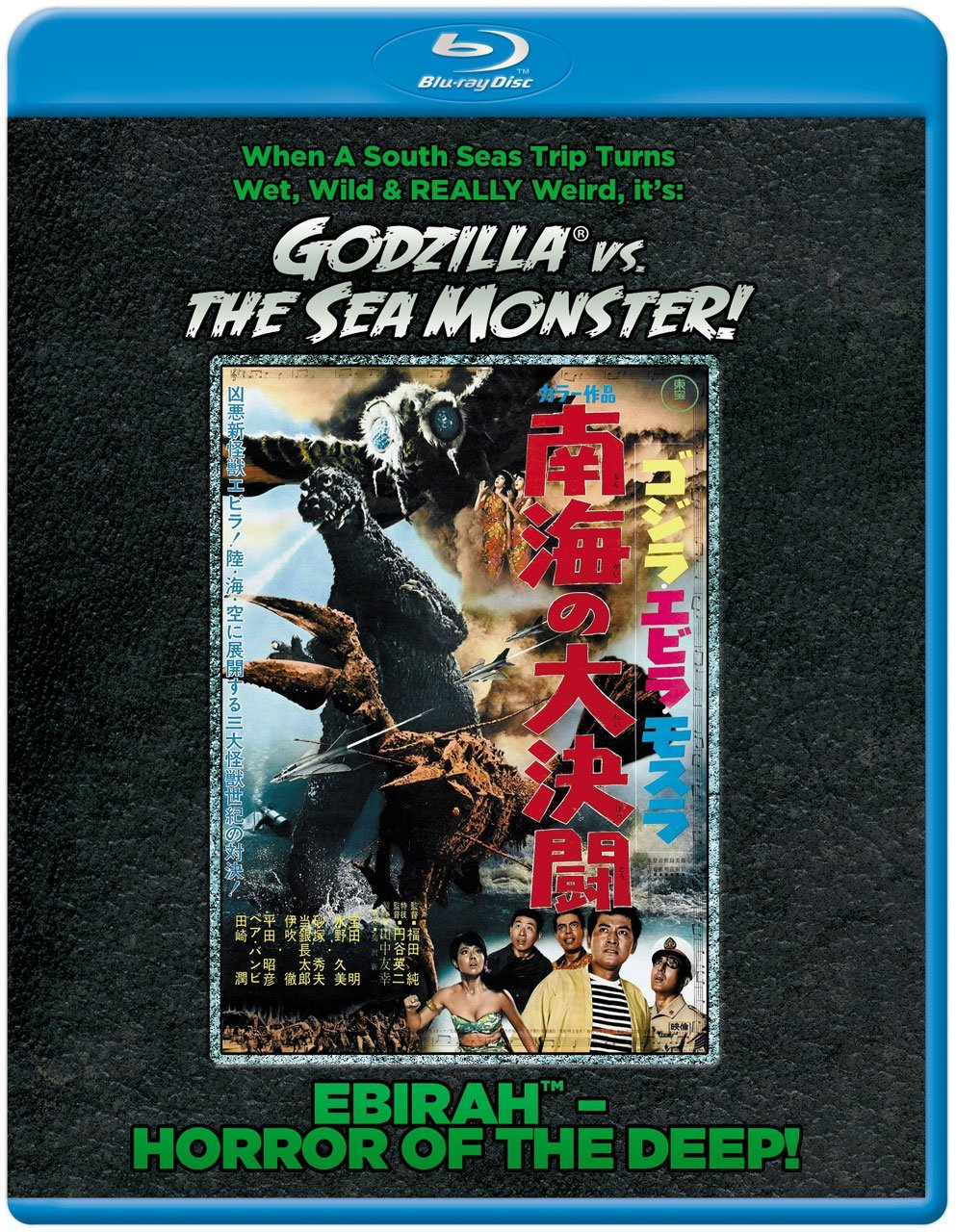 The upcoming release of the new GODZILLA film has led to a number of new Godzilla-themed products. Among them are three classic Godzilla movies being released on Blu-ray in America for the first time by a company called Kraken Releasing. Of course I've purchased all three of them (what did you expect?). I got them for about $13 each from Amazon. The first one that I have viewed is GODZILLA VS. THE SEA MONSTER (also known as EBIRAH--HORROR OF THE DEEP).

This entry in the Toho Studios' Godzilla series was made after INVASION OF ASTRO-MONSTER. GVSM is an okay Kaiju tale but certainly not as good as ASTRO-MONSTER. The story concerns strange activities on an uncharted island (called "Devil's Island" in the movie) where a SPECTRE-like organization called the Red Bamboo are building nuclear weapons. The evil group has also been kidnapping natives from nearby Infant Island and using them as slave labor, which is not a good idea, considering Infant Island is the home of Mothra.

The Red Bamboo uses a lobster/crab/shrimp-like creature known as Ebirah to help guard their lair. Ebirah is not one of the best of Godzilla's foes...one wonders why it takes so long for Godzilla to take him out (they spend most of their first battle bouncing a giant rock at each other). The film is more than half over before Godzilla wakes up from his "hibernation", and Mothra only gets into action at the very end.

Most of the film is taken up with the story of Ryota, who steals a yacht to search for his brother, who is missing due to a shipwreck. Ryota and his companions (including Akira Takarada, somewhat cast against type as a thief) are attacked by Ebirah and are washed up on Devil's Island, where they encounter one of the kidnapped Infant Island natives--the lovely Dayo, played by famed Toho actress Kumi Mizuno. Having Akira Takarada and Kumi Mizuno in the cast certainly helps the non-monster sequences, of which there are plenty of.

GODZILLA VS. THE SEA MONSTER represents a change in the Toho Godzilla series. Usual director Ishiro Honda was replaced in this entry by Jan Fukuda, who used a more leisurely pace in this movie. The film's music score was by Masaru Sato instead of Akira Ifukube. Sato's musical choices were a bit strange to say the least--during a battle between Godzilla and the Red Bamboo's air force, Sato uses a 1960s Go-Go theme. Sato later underscores a Godzilla-Ebirah fight with what sounds like a rip-off of the "Batman" TV theme.

The legendary Eiji Tsuburaya is credited with the FX, but according to August Ragone's biography of Tsuburaya most of the effects work was overseen by Sadamasa Arikawa. The Red Bamboo's complex is expertly realised, and as expected in a Toho Kaiju feature the monster battles are the major highlight of the film.

With elements such as an evil organization bent on world conquest, a secret island lair, an exotic leading lady, and a nuclear bomb set to detonate at the climax, GODZILLA VS. THE SEA MONSTER seems more like a James Bond movie instead of a Kaiju film. It is not on the same level as the earlier Ishiro Honda Godzilla classics, but it is unusual enough to be worthy of a monster movie fan's attention.

Kraken's Blu-ray of this feature is very impressive. The picture quality is excellent--I doubt that you will see this movie look any better than it does on this disc. The audio is in DTS mono, and the disc features the original Japanese dialogue track with English subtitles and a English-dubbed track. The sound is very vibrant overall. The only extra is the original Japanese trailer, which is subtitled--a very nice touch.

I have not seen the other two Kraken Godzilla Blu-rays (I will be reviewing them soon), but I have to say that Kraken has done a fine job with GODZILLA VS. THE SEA MONSTER. Considering the low price, I'm sure many monster fans will be picking this up.