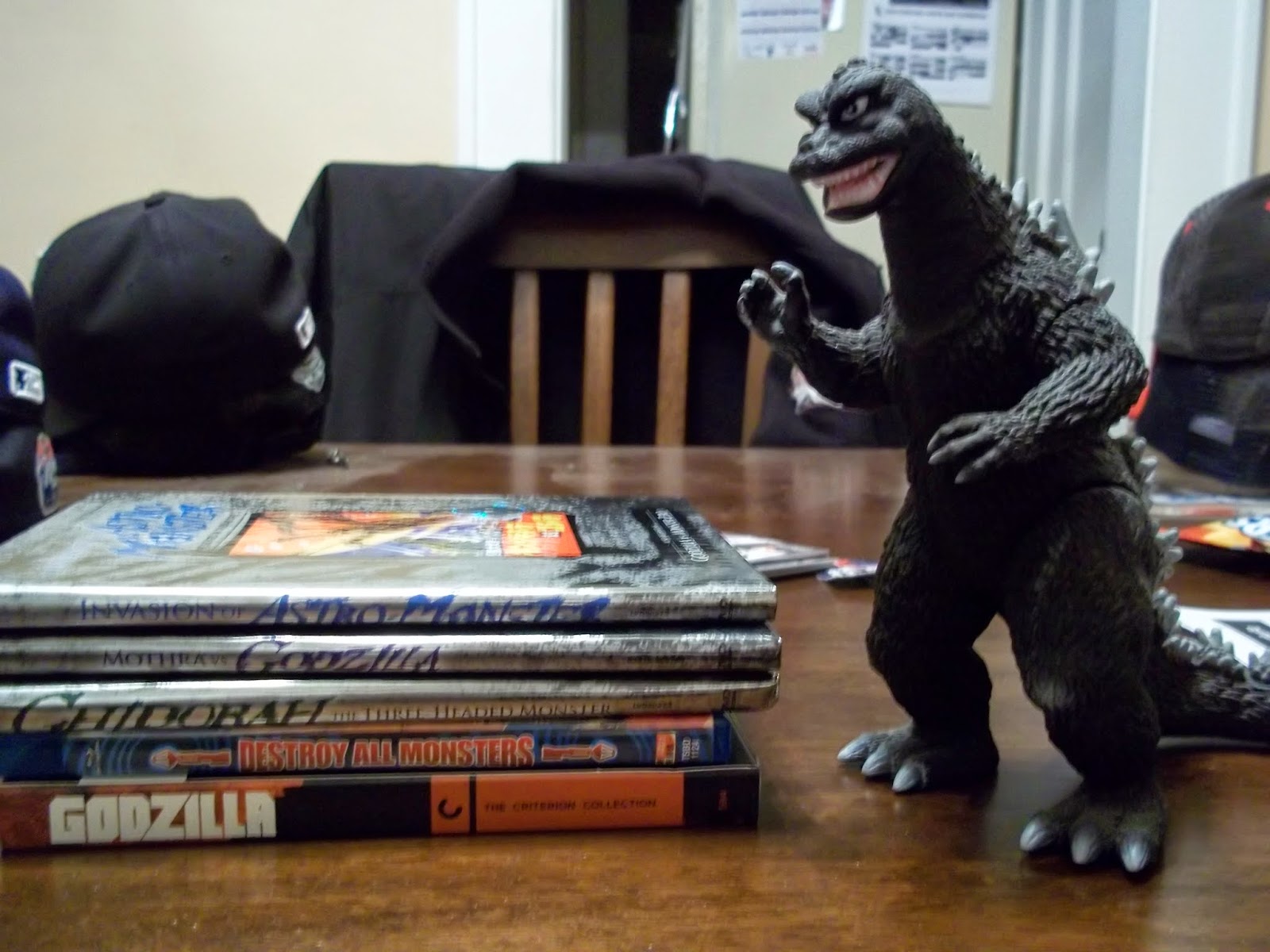 In honor of the opening of the new Godzilla feature film, here is a list of my five favorite Godzilla movies. I'm have a feeling some of you reading this will say "Aren't all Godzilla movies the same?" Well, they're not. I realize there are a number of folks who think Godzilla films are shoddy crap....but I love them. The wild plots, the monster fights, the various models & miniatures...all that stuff fascinated me when I was a kid, and they still do today. You need to have a certain type of imagination to appreciate these movies--and that type of imagination is sadly lacking in today's society.

You may notice that most of this list is comprised of entries from the mid-1960s. In my opinion that is when the Godzilla series was at its apex. I'm using the common American titles for these films because....I'm an American.

1. GODZILLA VS. MONSTER ZERO (1965)
Not only my favorite Godzilla movie, it's one of my favorite movies of all time. This one has everything--direction by Ishiro Honda, FX by Eiji Tsuburaya, a thunderous musical score by Akira Ifukube, aliens trying to use various kaiju to take over the earth, guest star roles for King Ghidorah and Rodan, a monster fight on the moon....and there's more! You also get the best leading man in Japanese fantastic film (Akira Takarada), the best leading lady in Japanese fantastic film (Kumi Mizuno), and a American guest star (Nick Adams). The ultimate Godzilla adventure.

2. GODZILLA VS. THE THING (1964)
The "Thing" is Mothra. Many kaiju movie experts (yes, there are people like that out there) consider this the greatest Godzilla outing. This has some spectacular battle scenes, and some of the best miniatures in the entire series. Akira Takarada is in this one also.

3. GHIDORAH, THE THREE-HEADED MONSTER (1965)
This outing features the introduction of the stupendous King Ghidorah, the three-headed golden winged dragon who is Godzilla's greatest foe. Ghidorah is such a threat that Rodan and Mothra have to help the King of the Monsters in defeating him. Just pure monster madness.

4. DESTROY ALL MONSTERS (1968)
Toho Studios was planning to this to be the final Godzilla movie, so they pulled out all the stops and included just about every kaiju from all of their fantastic films made over the last 15 years. Not only do you get Mothra, Rodan, and Ghidorah, you also have Manda, Anguirus, Baragon, etc. This is another "aliens using monsters to try to take over the Earth" plot...but this time the aliens send the monsters all over the world, not just Japan (for example, we are shown Godzilla attacking New York, way before that....certain movie was made). This film also explains the set-up of Monster Island.

5. GODZILLA (1954)
The original...a movie which has almost nothing in common with the rest of the series. A brooding and atmospheric cautionary tale about the use of nuclear weapons. Even the America version of this movie (with Raymond Burr) is far darker than the usual 1950s monster flick. Would the Godzilla series have continued as long as it did if it had kept the originals attitude? Probably not.