GODZILLA ON MONSTER ISLAND (GODZILLA VS GIGAN) On Blu-ray 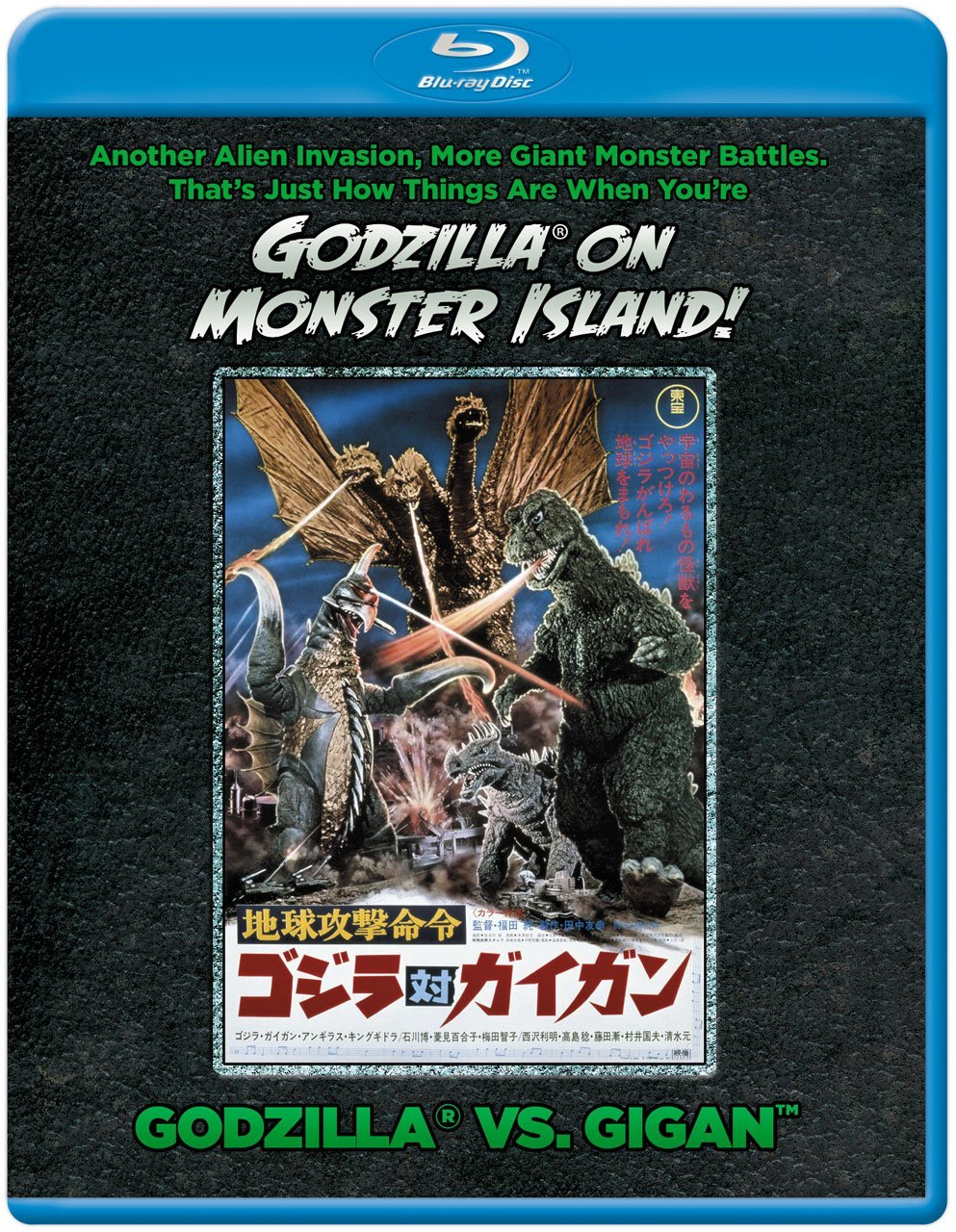 My look at Kraken Releasing's three Godzilla movie Blu-rays comes to a conclusion with GODZILLA VS. GIGAN. Despite the disc packaging featuring the GODZILLA ON MONSTER ISLAND title, GODZILLA VS. GIGAN is the title shown on-screen.

This entry in the Toho Godzilla series came after the wild & wacky GODZILLA VS. THE SMOG MONSTER. For this feature Toho brought back a director (Jun Fukuda) and a screenwriter (Shinichi Sekizawa) who had previously worked on the series. The film's script is something of a return to Godzilla's past--it deals once again with aliens who try to use various monsters to help them take over the planet Earth.

While in the past aliens tried to control Godzilla, the extraterrestrials concerned here decide to destroy him, by summoning the legendary King Ghidorah and the ridiculous-looking Gigan. It's always great to see Ghidorah in action, since that kaiju is one of Godzilla's greatest foes. Unfortunately the same can't be said for Gigan--he seems to have wandered in from a Gamera film.

Godzilla does have some help in the form of Anguirus (who fought Godzilla in GODZILLA RAIDS AGAIN). However Anguirus isn't exactly one of the most famous Japanese monsters, and one wonders why he was chosen to be in the story. It might have been that Anguirus was in much of the stock footage used for GODZILLA VS. GIGAN--there's a ton of scenes from earlier Godzilla films used here.

The "aliens vs. monsters" plot is one of the staples of Japanese fantastic cinema, but it doesn't work as well this time around. Almost the entire story takes place in a children's amusement park, which happens to be the aliens' hideout. GODZILLA VS. GIGAN is far from a globe-spanning sci-fi epic.

The Kraken Blu-ray of GODZILLA VS. GIGAN does not have the excellent picture quality of the company's other Godzilla releases. This may be due to the large amount of stock footage that was used in the film. The DTS audio does a fine job of showcasing Akira Ifukube's music score. The Blu-ray has the original Japanese dialogue track (with English subtitles) and a English-dubbed dialogue track. The only extra is the original Japanese trailer, which is subtitled in English.

All of the Kraken Releasing Godzilla Blu-rays (see my earlier posts for this month) can be had for an affordable price. These Blu-rays are more than likely going to be the best American home video versions of these particular films.
Posted by Dan Day, Jr. at 1:34 PM