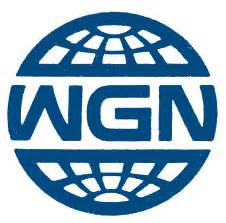 On this day in 1907, Marion Morrison was born. He is now better known as John Wayne. Wayne may still be the most popular American movie actor of all time--heck, he's probably more popular than about 95% of all the actors currently working in the entertainment industry right now.

John Wayne was the first movie star I remember knowing about. That's because when I was a kid in the 1970s, his films were shown on TV constantly. Even when I was little, and didn't really know anything about movies, I understood that John Wayne was JOHN WAYNE. His stature was that important among the American public.

The one TV station that always showed John Wayne movies was WGN-TV, Channel 9, out of Chicago. When I say WGN showed a lot of John Wayne movies, I mean that it seemed WGN showed them every single day. I bet that in the 1970s at least 75% of WGN's programming was devoted to The Duke or the Chicago Cubs. (Now it seems that 75% of WGN America's programming is devoted to reruns of "Law & Order" and "How I Met Your Mother".)

There seemed to be certain Wayne features that WGN favored, such as BIG JAKE, THE SONS OF KATIE ELDER, and ROOSTER COGBURN. Of course WGN would show THE QUIET MAN every St. Patrick's Day. But whoever was Channel 9's director of programming back then must have loved THE WAR WAGON. I swear there must have been an FCC rule demanding that WGN show THE WAR WAGON at least once a week. I can still hear Jack Brickhouse or Steve Stone saying something like, "After tonight's Cubs game stay tuned for The 10th Inning Show. And then stick around for the action-packed John Wayne feature, THE WAR WAGON."

WGN did show other classic films. They didn't show all the old horror and sci-fi movies that good old WFLD, Channel 32 did--WGN played more mainstream material, such as Westerns, war films, and crime dramas. The had Sherlock Holmes Theater (the ones with Basil Rathbone), Charlie Chan Theater, and they had a lot of the Abbott & Costello movies.

I'm sure a lot of people from the Midwest recall the WGN program "Family Classics", hosted by legendary Chicago TV personality Frazier Thomas. I saw a lot of great films for the very first time on "Family Classics", including such titles as THE WAR OF THE WORLDS and TREASURE ISLAND.

There's no doubt that WGN played a huge role in my old movie education. I will always associate Channel 9 with John Wayne, and vice versa. There are certain things that bring back memories of my childhood, and the combination of WGN and John Wayne always does.