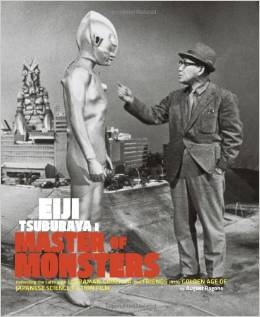 EIJI TSUBURAYA: MASTER OF MONSTERS was originally published in hardcover back in 2007. That version of the book now commands a huge price tag (if you can find a copy). A paperback edition has recently been released, no doubt to coincide with all the hype surrounding the new Godzilla film.

EIJI TSUBURAYA, written by Japanese film expert August Ragone, is a magnificent biography of the man who oversaw special effects work for almost every one of the legendary Toho fantasy films of the 1950s and 1960s. Tsuburaya (1901-1970) first started working in the Japanese film industry in the silent era, and eventually became a FX expert. Ragone covers Tsuburaya's entire career, including his work on several World War II-era battle epics, and of course the movie that changed Tsuburaya's life, the original GODZILLA (1954).

After the first Godzilla film Tsuburaya was involved in almost every other Toho Kaiju entry, including such films as RODAN, MOTHRA, and GORATH. Tsuburaya would eventually form his own FX company, and that would lead to the creation of several famous Japanese TV shows and characters--the most famous being the legendary Ultraman.

In many ways Tsuburaya was way ahead of his time--his FX shop had a huge hand in the production of various filmed entertainment, just like ILM, Weta, and Pixar in the 21st Century. Most of the Kaiju Tsuburaya helped create still live on to this day in one form or another.

The real highlight of this book is the incredible behind-the-scenes photographs, which showcase the detail and fine work that was a hallmark of Tsuburaya's technique. I know most people in the Western world have a tendency to dismiss Japanese cinematic special effects as "phoney"--but as author Ragone explains, Tsuburaya wasn't as concerned about re-creating reality as he was with creating an illusion of reality.

Of course Tsuburaya didn't do all of the FX by himself. Ragone mentions several of Tsuburaya's co-workers and collaborators. Ragone also gives background material on Japanese cinema and the Kaiju genre in general, to properly put Tsuburaya's work into context.

The book has a nice, clean design and layout, and it contains a selected Tsuburaya filmography.

Is there a limited audience for this type of book? Well, one would suspect at first that only old monster movie geeks like me would go for it. But I think a lot of film buffs--even the ones who would never admit to watching a Godzilla movie--would be impressed with Ragone's effort. The pictures in the book are spectacular enough on their own--but Ragone's text is informative and interesting as well. EIJI TSUBURAYA: MASTER OF MONSTERS is certainly a must-have for those who love giant monster movies, but it is also recommended for those willing to learn about a type of cinema most Americans have very little familiarity with.