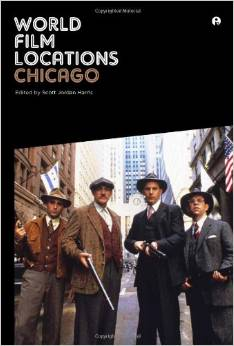 The city of Chicago, Illinois has been featured in hundreds of theatrical films. There's no other big city that looks (or feels) like Chicago. You can't fake Chicago--although that hasn't stopped a number of producers and directors from trying in recent years.

WORLD FILM LOCATIONS--CHICAGO, edited by Scott Jordan Harris, covers 46 different scenes from various movies that were shot in the Windy City. Most of the usual suspects are included here such as THE BLUES BROTHERS, FERRIS BUELLER'S DAY OFF, and THE UNTOUCHABLES. But there are also a number of not-so-famous films (and not-so-famous Chicago landmarks) featured as well.

Each location's address is given and a recent photo as well. Some of the locations do not exist anymore (such as good old original Comiskey Park--yes, it is in this book), and some of them are no longer recognizable. A brief synopsis for each scene discusses the location within the context of the film and the location's part of Chicago history.

Most of the writers of the chapters have a Chicago connection in some way, and understand the unique Midwestern sensibility that the city has. This is more than just a "tour guide" book (even though it can be used as such). Along with highlighting certain landmarks and buildings, the book tries to give the reader a sense of what makes Chicago so artistically stimulating.

WORLD FILM LOCATIONS--CHICAGO is a nice little book (its small size makes it easy to carry around on your next trip to the city). It is part of the World Film Locations book series.