THE SHADOW OF THE CAT On Svengoolie


As anyone who has read this blog knows, I'm a huge fan of Hammer Films. I haven't seen ALL of Hammer's output--there's a few still out there that I haven't gotten to for one reason or another.

One of those few was THE SHADOW OF THE CAT (1960). Last night it was featured on MeTV's Svengoolie program. I was very excited to see it--not just for the fact that it was a rare Hammer film, but for the fact that I was going to see it in a certain way.

The very first time that I saw all the great Hammer films was on Svengoolie's show in the 1980s(actually he was the Son of Svengoolie back then). Now of course those Hammer movies were not presented in HD, or in widescreen, or in an uncut form. The prints usually were not all that great, and of course you had to deal with commercial interruptions. But...that's how I originally saw all the great classic horror films, and that's how I saw THE SHADOW OF THE CAT last night. Seeing it that way brought back a lot of memories. I can't really remember the last time I've seen a feature film for the very first time on broadcast commercial television. If you grew up in the 1970s and the 1980s, that's how you saw all the famous classic films--and you usually had to stay up late to do it.

Now there's DVD, Blu-ray, cable, internet, streaming video, Redbox, Netflix, etc....and we take all these things for granted. I'm certainly not complaining about seeing rare films in a uncut, anamorphic, pristine condition....but I have to admit that there was something fun about staying up late as a kid and watching a movie you never saw before. There was a sense of discovery...you didn't have the internet or IMDB to look something up, and the only way you could get access to certain movie books would be going to your local library. In a way, viewing old movies on TV was my personal film class. I feel that you develop a love for a certain subject through your own experiences--not through someone else teaching you about it or other people trying to convince you it is something cool to get involved in.

As for THE SHADOW OF THE CAT....many people don't even consider it a "real" Hammer film. The name Hammer is nowhere on the credits (it was a co-produced with BHP Productions), but trust me...it's a Hammer film. It was made at Bray Studios and Black Park, and every name on the crew credits list is a Hammer veteran.

THE SHADOW OF THE CAT is an interesting take on the Old House/Disputed Will/Scheming Relatives/Beautiful Heiress thriller. The movie starts out with the murder of an elderly woman--a murder "witnessed" by her pet cat. Eventually, all the greedy relations & servants are "done in" by the feline. It plays out better than it sounds. Director John Gilling (who would go on to make several films for Hammer, including THE PLAGUE OF THE ZOMBIES and THE REPTILE) gives the film a decent amount of atmosphere, and even throws in several camera shots supposedly from the cat's point of view! Barbara Shelley, one of the greatest of all the Hammer hotties, is the beautiful heiress, and there's a fine supporting cast, led by Andre Morell and Freda Jackson.

The biggest problem with THE SHADOW OF THE CAT is that all the nasty conspirators act as guilty as all get out from the very beginning (especially Andre Morell and Freda Jackson). It's hard to believe the local police can't figure out what's going on right away....heck, Barney Fife and Inspector Clouseau could have solved this case.

It's rather fitting that THE SHADOW OF THE CAT was distributed in America by Universal, because it has a very 1930s-1940s feel to it. It was filmed in black & white, and there is no gore. One could easily imagine this film being made in 1936 on the Universal lot and starring Claude Rains and Gloria Stuart.

The film's cat theme inspired Svengoolie to pull off a whole bunch of feline jokes and references (including an appearance by "Purry Mason"). After 30+ years, Sven is still funny (at least, I think he's funny), and you have to give him credit that he's still going strong in the 21st Century. It's even safe to say that due to MeTV's nationwide reach, Svengoolie is more popular than ever.

Seeing THE SHADOW OF THE CAT the "old-fashioned way" was a rare treat for me. I'm kind of glad that there are still movies out there I've never seen. That means there is always something to look forward to. 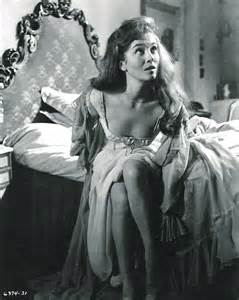 Barbara Shelley in THE SHADOW OF THE CAT
Posted by Dan Day, Jr. at 8:41 AM