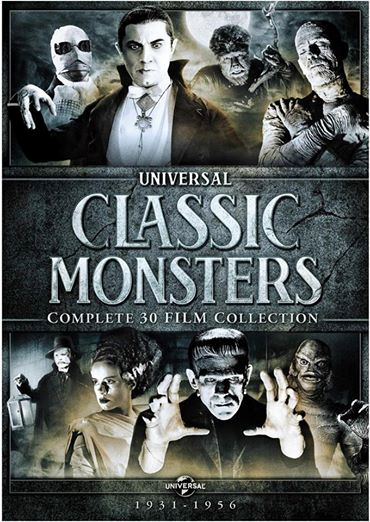 The above picture is a DVD box set that Universal will be releasing later on this year. Is this great news for monster fans? Well, yeah, if you don't have any of these movies on home video. And let's face it--if you are a monster movie fan, you own all these movies already, and you've probably bought them multiple times.

Heck, it wasn't that long ago that Universal released a Blu-ray box set containing some of the films in this collection. Universal has put out their classic monster films on DVD about three or four times. Why this super-duper box set--especially in an era in which most of the major studios are upgrading their film catalogs to Blu-ray--is coming out now is a bit puzzling.

But Universal has always acted somewhat strange when it comes to releasing product on home video. There's hundreds of movies that they control that still have not seen the light of day on DVD or Blu-ray. Universal owns the rights to most of the Paramount films from the early 1930s through 1948, and very few of those entries have made it out. That includes a lot of classic films with big stars and famous directors, including a number of titles featuring Carole Lombard.

And there's still classic monster movies that have yet to make an American DVD debut. There's a few Universal thrillers from the 30s and 40s still missing, and some more scattered titles such as ISLAND OF TERROR--a film directed by Terence Fisher and starring Peter Cushing. (Does Universal really think that film collectors would not be interested in that?)

I understand that Universal has to market their most famous material, and get the most out of their assets--but how are they doing that by re-releasing the same stuff over and over again? This "new" set is going to have a list price of over $120. I bet if you did some internet digging, and went on Amazon, or Oldies.com, or Ebay, you could get all 30 of these movies for less than $120. They are all already out on DVD, so that shouldn't be too hard.

The other thing about this "new" set is that it has no new extras to speak of--no new documentaries, no new audio commentaries, nothing. And no Blu-ray.

There's another monster movie set Universal will be re-releasing this year as well--their Hammer Horror set, which came out about a decade ago. That first set was in DVD--just like the new edition! About the only thing different in the 2014 Hammer set is that apparently the discs will not be double-sided. Universal is missing out on a prime opportunity by not putting the whole Hammer set on Blu-ray....if they would just put BRIDES OF DRACULA on Blu-ray alone, monster movie fans would go crazy.

Universal is one of the most famous and historic movie studios in the entire world. Why they seem so reticent to put more of their legendary past out on the market is beyond me. Yes, I know sales have something to do with it--but with so many titles just sitting on the shelf going to waste, wouldn't it make sense to try and get something out of them? Companies like Criterion and Kino have done more with Universal's back catalog than Universal has.

I know someone out there is probably thinking, "What's the big deal? Everything is going to be streaming or available on the internet sooner or later anyway." That could very well be true, but my response is this. What happens when someone pushes the delete button?