Book Review: WHY WE FOUGHT: AMERICA'S WARS IN FILM AND HISTORY 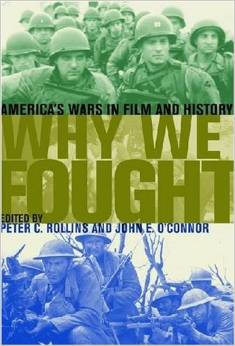 One of my latest purchases from Edward R. Hamilton Booksellers is a volume titled WHY WE FOUGHT: AMERICA'S WARS IN FILM AND HISTORY. I bought it for $5...when I looked up the book on Amazon to see if there were any reviews on it, I found out that the on-line giant was selling it for $45!

WHY WE FOUGHT (edited by Peter C. Rollins and John O'Connor) is a collection of essays concerning how America's wars have been dramatized by the entertainment industry. The entries in this book have been written mostly by college professors. This is not a book written by film historians or film buffs.

The book has chapters dealing with just about every major conflict in American history, starting with the Revolutionary War. It ends with chapters on 9/11 and the War on Terror.

WHY WE FOUGHT reads more like a textbook than something written for a mainstream audience. Some of the chapters are easier to get through than others. The authors are more concerned with the social and historical aspects of the movies mentioned than their artistic quality. This means will get a far different view of certain famous films than you would from a typical movie book.

My favorite chapters were Frank Thompson's examination of the 1960 and 2004 versions of THE ALAMO (Thompson was a historical consultant on the latter project); Peter C. Rollins' review of modern popular culture's attitude toward the Vietnam War; and a chapter on the making of BLACK HAWK DOWN.

Most of the chapters run about 20 to 25 pages--and that, in my opinion, is somewhat of a detriment. Just when a reader is getting interested in the author's take on a particular subject, the chapter ends. It seemed to me that in some of the chapters the respective authors had more things to say, but we limited by the format.

If you have an interest in American history and war films this is definitely a title to pick up....if you can get it as cheap as I did (I certainly would not pay $45 for it). For other readers this book might be a bit too dry.