Book Review: TOME OF TERROR--HORROR FILMS OF THE 1930S 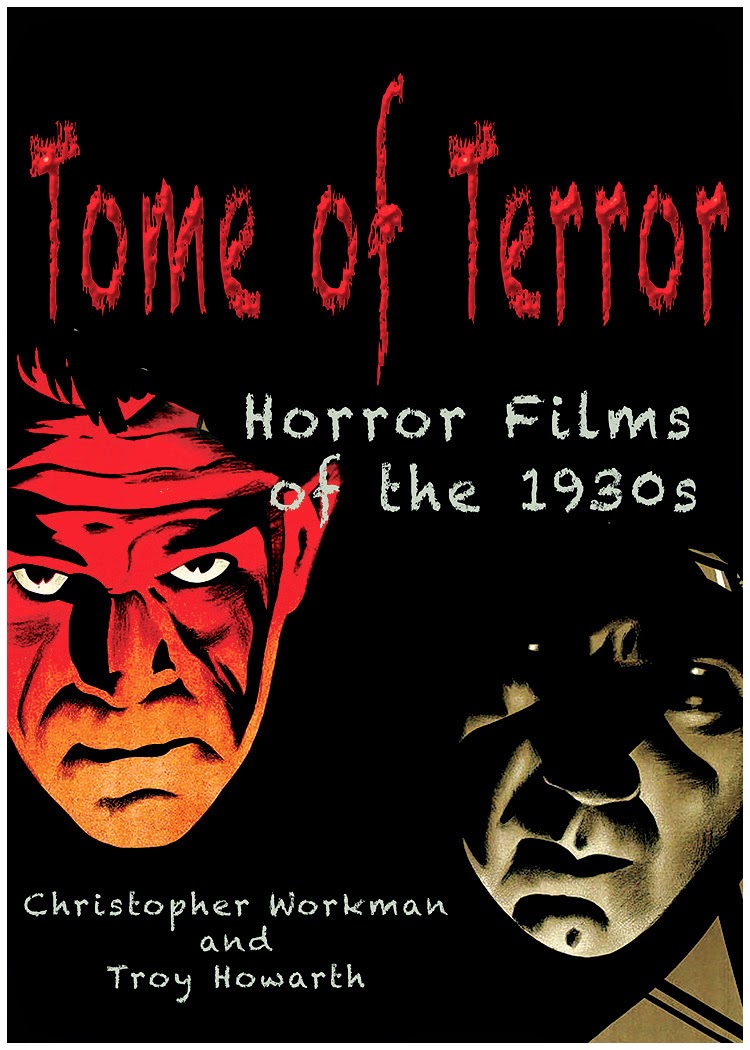 Midnight Marquee Press has recently published the first volume in a new series of books on the history of horror films. Written by Christopher Workman and Troy Howarth, TOME OF TERROR--HORROR FILMS OF THE 1930S covers the decade in which many consider the true classic horror film as we define it was invented.

The authors are attempting to cover all the horror films made in every single decade since the beginning of film to the present day--a rather daunting prospect, indeed. This first volume contains over 300 titles, and not just those produced in English-speaking countries.

A number of the films covered in this volume will be familiar to readers of the FORGOTTEN HORRORS series of books--films such as bizarre dark Westerns and low-budget murder mysteries. TOME OF TERROR looks at everything horror-tinged that was released in the decade, including famous entries such as the 1931 FRANKENSTEIN and the 1933 KING KONG.

Each film reviewed contains a cast & crew credits list, a short synopsis, and a analysis of the film by one of the authors (at the end of each entry the initials of the writer responsible for it is affixed). After reading (and owning) so many horror film books, I have to admit that by this time I'm not worried so much about cast credits or story detail as I am about whether the authors can bring a fresh take on material that has been written about literally hundreds of times. In this respect Workman & Howarth offer up plenty of food for thought.

For example, Troy Howarth points out that in Universal's THE MUMMY, there is no comic relief whatsoever...something I never thought about. Chris Workman gives an excellent review of MGM's RASPUTIN AND THE EMPRESS, a movie not usually considered a classic horror. I don't agree with all the authors' opinions.....Troy Howarth isn't all that impressed with Bela Lugosi's performance in THE RAVEN (I think it is one of Bela's best), and he's annoyed at Una O'Connor and her shrieking in THE BRIDE OF FRANKENSTEIN (I think she's great). It is refreshing, though, that the writers don't go the usual route when discussing several of the better-known films in this book.

There are a lot of movies featured in this book that even I was not familiar with. In the late 1930s Universal produced a series of films based on stories published by Doubleday's Crime Club....a series in which I knew nothing about, and which is fully examined in TOME OF TERROR. I also found out from this book that Japanese filmmakers of the 1930s had a strange fascination for Ghost Cats.

I do wish that with so many titles included, the book had a proper index. The index here only gives the film's year, not the actual page or pages on which the film is discussed. Maybe in the next volume the year being covered can be put on the top of each page, to give readers a better guide when skimming through the book looking for a certain movie.

TOME OF TERROR is well illustrated with many stills and poster art, and the book is a bit larger than the typical Midnight Marquee product. I think even hardcore monster movie fans who have read just about everything on the genre will enjoy it, just for the sheer number of movies written about. The authors have taken on quite a challenge, and I will definitely be looking forward to the next chapter of this series, which will examine the horror films of the 1920s.