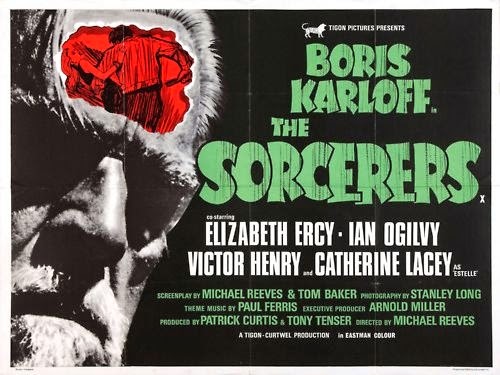 THE SORCERERS is a 1967 British horror film starring Boris Karloff. The movie was directed by cult icon Michael Reeves. Believe it or not, I had never seen this picture until last week when it was shown one afternoon on the Turner Classic Movies cable channel (hey, even I can't see everything).

THE SORCERERS has a major reputation among film geeks. Most of that is due to Michael Reeves, who also co-wrote the final screenplay. Reeves had only three "official" film director credits in his short life, but he is considered by some to be one of the greatest filmmakers to come out of the late 1960s. Reeves was a film geek himself (long before the term was even invented), and his love for cinema led him to get involved in a number of European productions. He apparently had a major role in the making of an Italian horror film starring Christopher Lee known as THE CASTLE OF THE LIVING DEAD. Reeves then directed THE SHE BEAST, a bizarre and uneven monster tale with horror icon Barbara Steele. Next up was THE SORCERERS, followed by the sadistic English Civil War melodrama WITCHFINDER GENERAL, which featured Vincent Price. (It's amazing that in his very short career Reeves worked with four of the greatest horror film stars.)

THE SORCERERS concerns Professor Marcus Monserrat (Boris Karloff), a elderly scientist who describes himself as the leading authority on medical hypnotic research. Monserrat is desperately looking for someone to participate in his experiments, and he finds that someone in Mike (Ian Ogilvy), a bored London youth. The Professor takes Mike back to his flat and he subjects him to a barrage of strange lights and rays. Unknown to Mike, the Professor has hypnotized him--not only can Monserrat control Mike's actions, he can also mentally and physically experience what Mike is going through. After Mike leaves. Monserrat and his wife Estelle take control of him. At first the old couple just want to experience simple pleasures that are denied them--but soon Estelle becomes addicted to this "gift" and she wants more and greater pleasures.

THE SORCERERS is set during the time of "Swinging London", but it is about as far away from that kind of world as you can get. The London portrayed here is a shabby working-class city, dull and gloomy. The Professor and his wife live in a drab, boring flat, and Estelle's demand for greater control over Mike stems partly from the couple's economic circumstances. THE SORCERERS is very different from the typical British horror film of the period--it is not set in the Gothic never-never land of Hammer Films, or the generic contemporary world of Amicus productions. Reeves uses a semi-documentary style, showing a climate so boring that Mike allows a strange old man to experiment on him just for kicks. Mike and his best friend Alan even have real ordinary jobs--and we actually see them working (you never see anybody in a Hammer film actually working for a living, other than the people inside a pub). There is a nightclub that Mike and his girlfriend frequent, but the scenes there are shot so perfunctory that it's obvious Reeves wasn't all that interested in them.

What Reeves is interested in is showing how the old tries to take control of the young (a common theme in his very few films). What makes THE SORCERERS uncomfortable viewing is not any violence or gore, but the idea that elderly people want to feel the same sensations that younger people do. Estelle has more hypnotic power over Mike than her husband does, and she uses it to drive the young man to crime and aggressive behavior. Catherine Lacey steals the film as Estelle--it's certainly not the type of performance (or character) one would expect from an older lady. Estelle even incapacitates her husband so that she can fully control Mike. (Seeing Karloff knocked down and then sitting on the floor for a long period of time is rather unsettling, considering the many health problems the man had during the filming.)

Karloff, of course, is excellent as usual. At first the Professor comes off as a bit of a intimidating nut, but as the story goes on, and Monserrat realizes his wife has gone over the edge, Karloff portrays quite well the man's sorrow and disgust over the turn of events. Ian Ogilvy (who was a best friend of Michael Reeves, and also starred in THE SHE BEAST and WITCHFINDER GENERAL) is fine as Mike. The young man is shown as somewhat jaded and cynical at the beginning, but he is not a monster, which makes his "transformation" work to the better. Ogilvy shows that Mike does know something is going on with him, but he is not quite able to figure out what.

There is violence in THE SORCERERS, though not as much as one would expect from Reeves' reputation. (As a matter of fact this movie is pretty tame compared to WITCHFINDER GENERAL.) Estelle drives Mike to fight Alan a couple of times, and the fight scenes are sloppy and brutal--not anything like the usual choreographed battles with perfect-looking punches and falls. Mike is driven to attack women as well (these scenes are scary but not anywhere near as explicit as other films of the type). Eventually Mike is tracked down by the police, and the result is a very grim ending for the main characters.

THE SORCERERS has a very interesting premise, and Reeves does an impressive job of direction. The movie isn't perfect....the nightclub scenes go on a bit too long, and the final chase scene could have been shortened. But if you are a fan of this material, THE SORCERERS is well worth seeing. Just know that it is not exactly a fun night at the movies.

After THE SORCERERS Michael Reeves made WITCHFINDER GENERAL, the movie on which his extensive cult status is mostly based on. WITCHFINDER GENERAL is very well done, but it is even more grim than THE SORCERERS--as a matter of fact, it is one of the most downbeat and depressing films ever made. Soon after that film's production, Reeves died of an accidental overdose in 1969 at the age of only 25. Many have speculated on what he would have turned out if he had lived. I think he might have wound up being the British equivalent to Sam Peckinpah. He would have easily fit into the dark and realistic world of early 1970s movies. But then again, due to his truculent nature (his battles with Vincent Price on the set of WITCHFINDER GENERAL are now legendary), he might not have had a very lengthy directing career after all.
Posted by Dan Day, Jr. at 8:49 AM