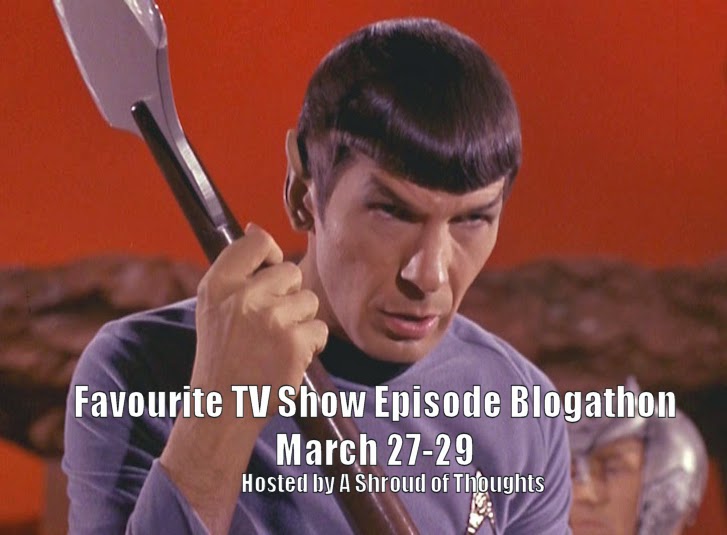 This post is my contribution to the Favorite TV Show Episode Blogathon, hosted by Terence Towles Canote at the A Shroud of Thoughts Blog. http://mercurie.blogspot.com/2015/03/the-favorite-tv-show-episode-blogathon.html


Growing up in the late 1970s and early 1980s, I was exposed to several examples of Classic American Network television. Before the advent of cable, and reality & talk shows, old TV episodes were about the only thing that was on when I was a kid. I can't say I have one single all-time favorite TV show--there's about five or six I would put at the top, depending on my mood.

One of these top five shows is THE WILD WILD WEST, which originally ran on the CBS network from 1965 to 1969. Influenced by the James Bond/spy boom of the early 1960s, TWWW was a mixture of espionage, Jules Verne, and "B" movie westerns. The show starred Robert Conrad as American secret agent James West, and Ross Martin as his partner Artemus Gordon. West and Gordon were assigned by President U. S. Grant himself to deal with extraordinary threats throughout the American frontier of the 1870s.

THE WILD WILD WEST, in my opinion, was one of the most entertaining shows in American television history. Each episode dealt with a intriguing villain (usually played by a notable guest star) who had some sort of outlandish plan which West and Gordon had to foil. James West was the good-looking unflappable hero who wasn't just a ladies man--he was also maybe the most physical leading character on TV. Robert Conrad, who did most of his own stunts, was perfect in the role. Artemus Gordon, a former actor, was a master of disguise, and also something of a amateur scientist, making him a kind of "Q" for James West. Ross Martin, a excellent character performer, took the role of "Artie" and ran with it, making Gordon into one of the best-loved sidekicks on the small screen.

If there is one single episode that I would have to discuss when it came to TWWW, it would have to be "The Night the Wizard Shook the Earth", This was only the third episode ever aired, on 10/1/65 during the series' first season. What makes it really important was that it was the debut of West and Gordon's biggest (no pun intended) adversary, Dr. Miguelito Loveless. 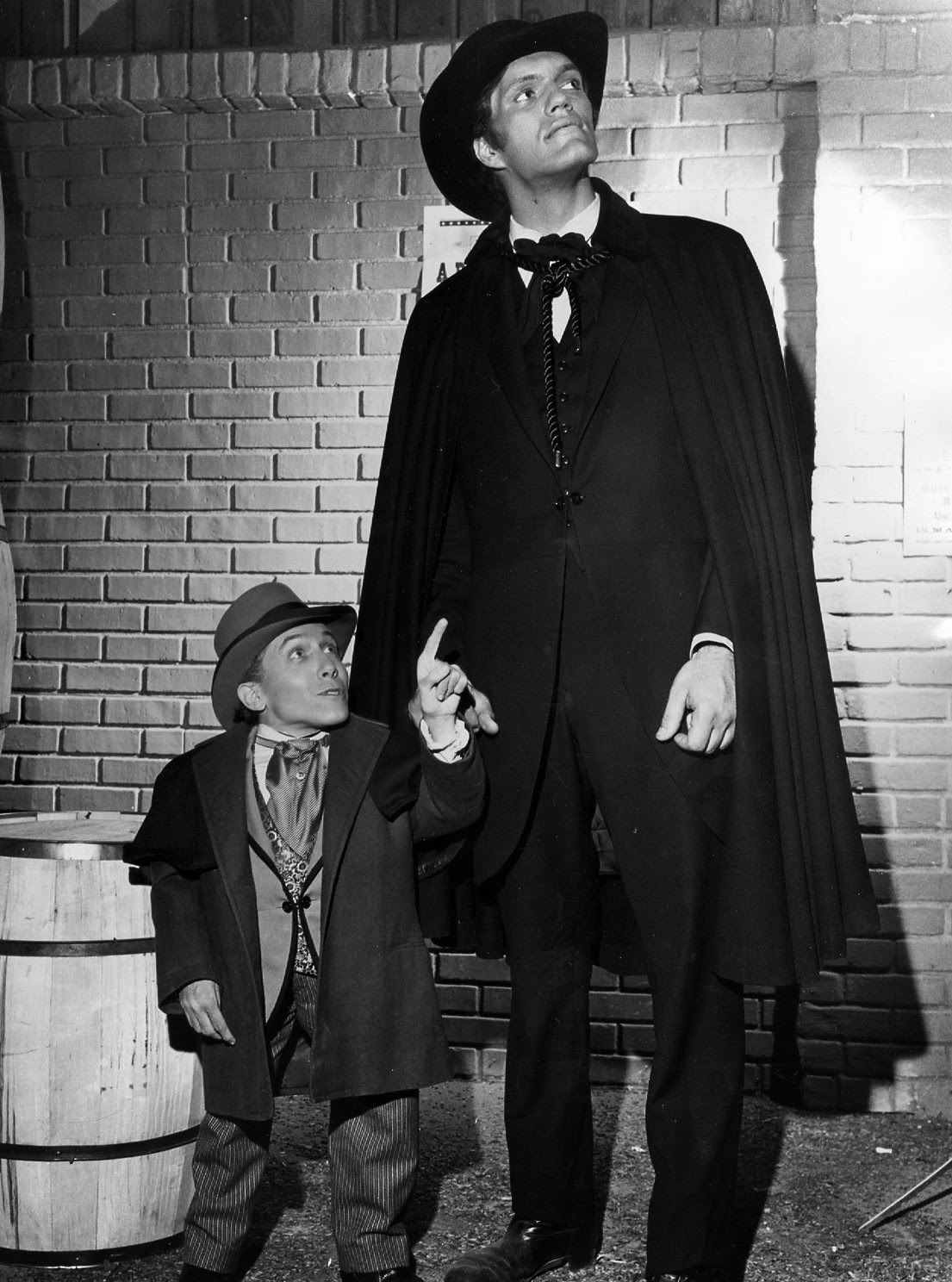 Michael Dunn as Dr. Loveless and Richard Kiel as Voltaire

At the beginning of the episode, we are introduced to a well-dressed dwarf and a towering figure in black, hiding in the night-time shadows of a gloomy pier. The small man explains to his giant companion that he has the world's most powerful explosive, even though it is the size of a pebble. The two men are awaiting the arrival of a Professor Nielsen, who also has the secret of the explosive.

James West has been assigned to guard the Professor, and he attempts to fool any assassins by posing as Nielsen. (If you are wondering why Artemus didn't pose as the Professor, it may be because this was one of the show's earliest epiosdes, and the character of Artie had not been truly defined yet.) The dwarf recognizes Nielsen, however, and kills the Professor with the explosive.

West accompanies Nielsen's secretary Greta (Leslie Parrish) back to her hotel room. Greta, however, is in cahoots with the Professor's killers. She leads West into a trap, which he escapes from. West becomes suspicious of Greta and tells her that the Professor gave him the secret of the explosive before he died. West hints to Greta that he would be willing to sell the secret to the highest bidder. Greta agrees to take West to an interested party--and the viewer is now officially introduced to Dr. Miguelito Loveless.

The writer of this episode, John Knuebuhl, created the character of Dr. Loveless specifically for Michael Dunn. Knuebuhl had read about Dunn in a newspaper article and felt he would make an interesting villain for the show. The 3 foot 10 inch Dunn was not just a gimmick--he was an acclaimed actor in his own right (Dunn would even be nominated for a Best Supporting Actor Oscar for his role in SHIP OF FOOLS).

Dr. Loveless may be small in stature, but he's no pushover. When James West goes to the Doctor home and first sees him, Loveless is involved in a match with three burly wrestlers, who he makes quick work of. West finds out that Loveless is not a raving madman, but a refined, cultured intellectual who even sings (Loveless performs alongside Michael Dunn's real-life singing partner Phoebe Darin as Antoinette). Dunn's exquisite way with dialogue makes the viewer hang on his every word. Dunn makes Loveless so fascinating, he overshadows West and Gordon. (The episode hints that Loveless is developing radio, the aircraft, the automobile, and even television!)

Loveless explains to West that he wants half of California given back to him, since he claims that it was originally owned by his Spanish ancestors. Loveless threatens to kill 5,000 people with his explosive if his demands are not met. After West tell the Governor of the demands, Loveless captures him....but West uses his charms on Greta to effect an escape. West finds out from Greta that Loveless is going to set off the explosive in a clock tower next to the Governor's mansion.

West rushes to the tower and he and Loveless battle over the explosive on the scaffolding inside the tower (a scene which shows off the physical prowess of both Robert Conrad and Michael Dunn). West saves the day, and the Doctor is put in jail--but he wouldn't stay there long.

Michael Dunn made a huge splash as Dr. Loveless, and he played the role a total of ten times during the run of TWWW. In later episodes the Doctor's plans would become more and more flamboyant. In "The Night the Wizard Shook the Earth" there's nothing campy about Loveless--he's a dangerous man, and a suitable foil for the handsome West. The character of Dr. Loveless is now remembered as one of the great classic TV show villains--whenever anyone thinks of THE WILD WILD WEST, Dr. Loveless comes to mind just as much as James West and Artemus Gordon do.

The first season of TWWW was filmed in black & white, and this season was moodier and less outlandish than the second season of the show. In between the first and second seasons of TWWW, the BATMAN show premiered. I don't know this for sure, but I think the success of BATMAN had an affect upon TWWW. In the second season of TWWW, the show was in color, and the stories and villains became wilder and wilder (the bad guys in particular starting veering into BATMAN territory). In the third season things seemed to tone down a bit. The fourth season was dramatically hurt by the heart attack of Ross Martin, which caused the actor to miss several episodes. TWWW was still getting decent ratings when it was cancelled--CBS pulled the plug on it because they were worried over a Federal Commission on violence which targeted certain network TV shows. By today's standards, of course, the show looks tame....but nearly every episode had a huge fight scene where James West would take on several enemies single-handily (how James never tore his tighter-than-tight pants during any of these battles I'll never know). Compared to other action TV shows of the time, the stunts of TWWW were pretty rough--both Robert Conrad and Ross Martin were severely injured at one time or another.

THE WILD WILD WEST still runs on syndication to this day, and is available on home video (I have all four seasons on DVD). The show had such an impact on pop culture that it even warranted a horrible big-screen adaptation in 1999 (the less said about that, the better). I've loved the show since I was a kid, and I believe it still holds up very well. Robert Conrad and Ross Martin were a great team, and the combination of Western setting, action-adventure, lovely girls, and Bondian elements made every episode seem like a feature film. You can't go wrong with just about any episode of THE WILD WILD WEST, but "The Night the Wizard Shook the Earth" is a good place to start. 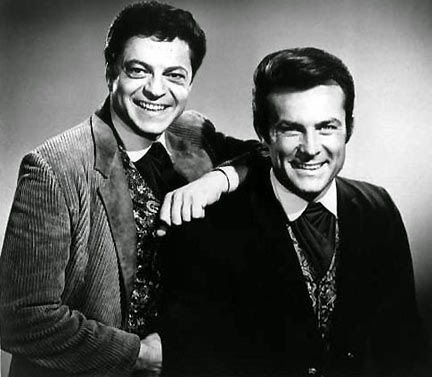