Highlights From My DVD/Blu-ray Collection--Part One*

*Or: Why I Never Have Any Money


Today I am going to start a new series showing some--some--of my vast and head-scratching home video collection. What I will reveal to you is only the tip of the iceberg. You may ask, "How can I build my own fantastic home video collection?" Well, it helps to not spend any money on drugs, alcohol, and cigarettes...and it really helps to be a pathetic single person with no children. 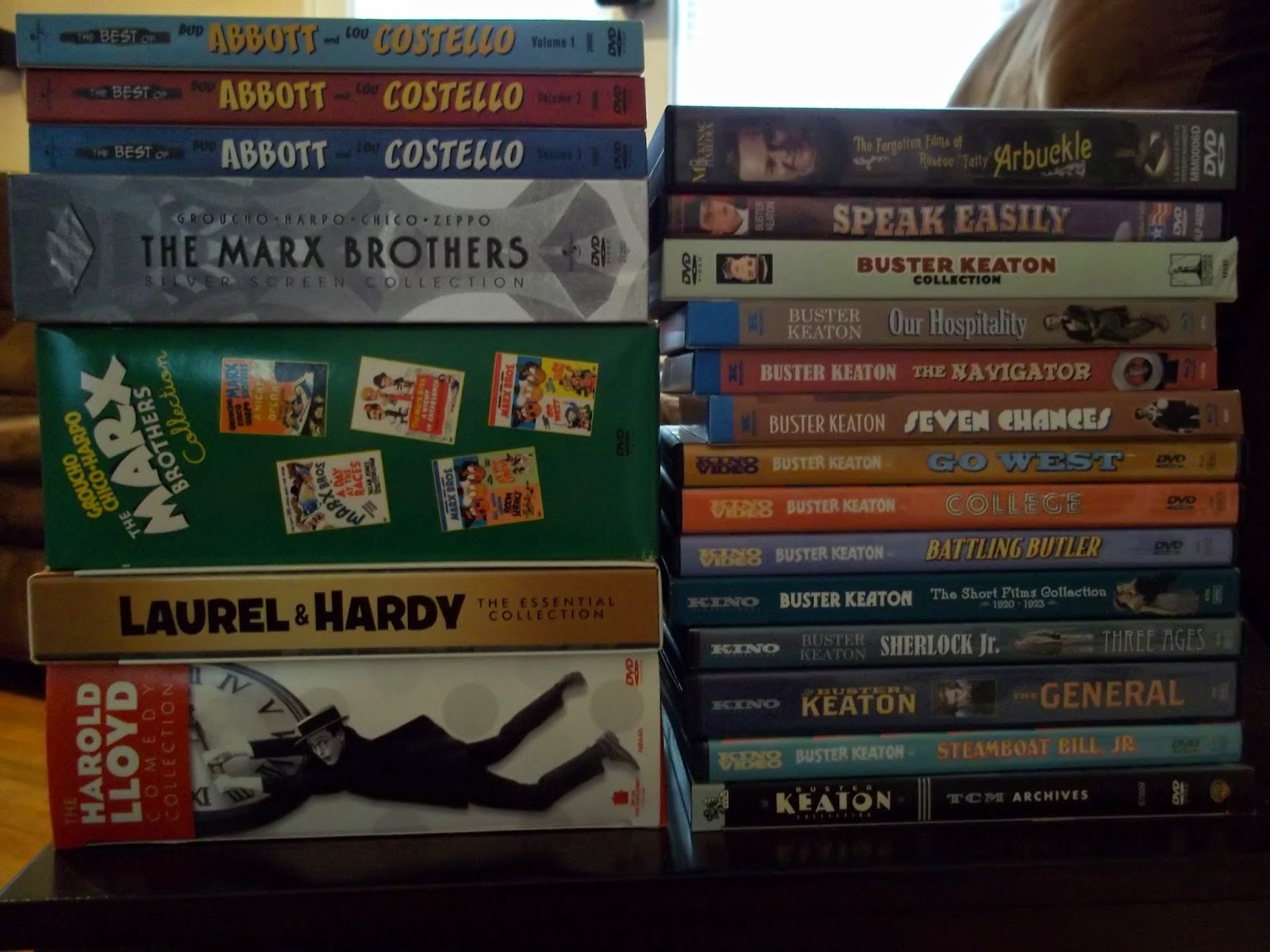 Let's start out with some classic comedy, shall we? I've got a Harold Lloyd box set, a Laurel & Hardy box set, two Marx Brothers box sets, three Abbott & Costello sets, and a whole bunch of Buster Keaton. I also have a Our Gang box set...I should have put it in this picture but I didn't even think about it till I had put everything away (I've got DVDs and Blu-rays scattered all over). 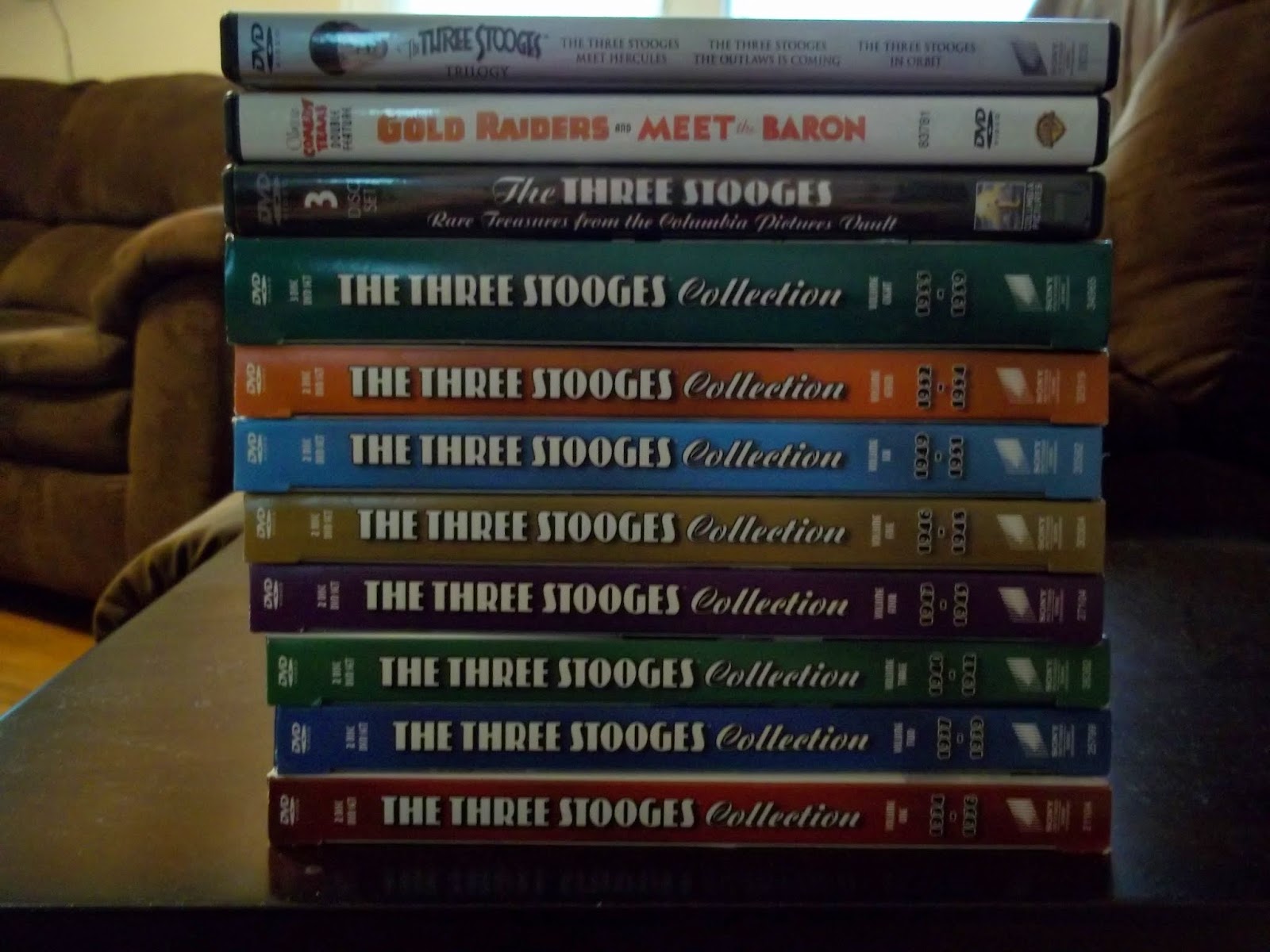 But when it comes to classic comedy, you can't beat The Three Stooges. I own every single Columbia short subject the Stooges appeared in. I also have most of the Stooges' feature films, and once again, after I put all this away, I realized there was some stuff I should have put in the picture, such as the Leonard Maltin documentary on the Stooge's time at MGM, and the Warner Archives DVD-R of all the MGM shorts the Stooges made. I also have the 1930 Fox film the Stooges and Ted Healy starred in, SOUP TO NUTS. 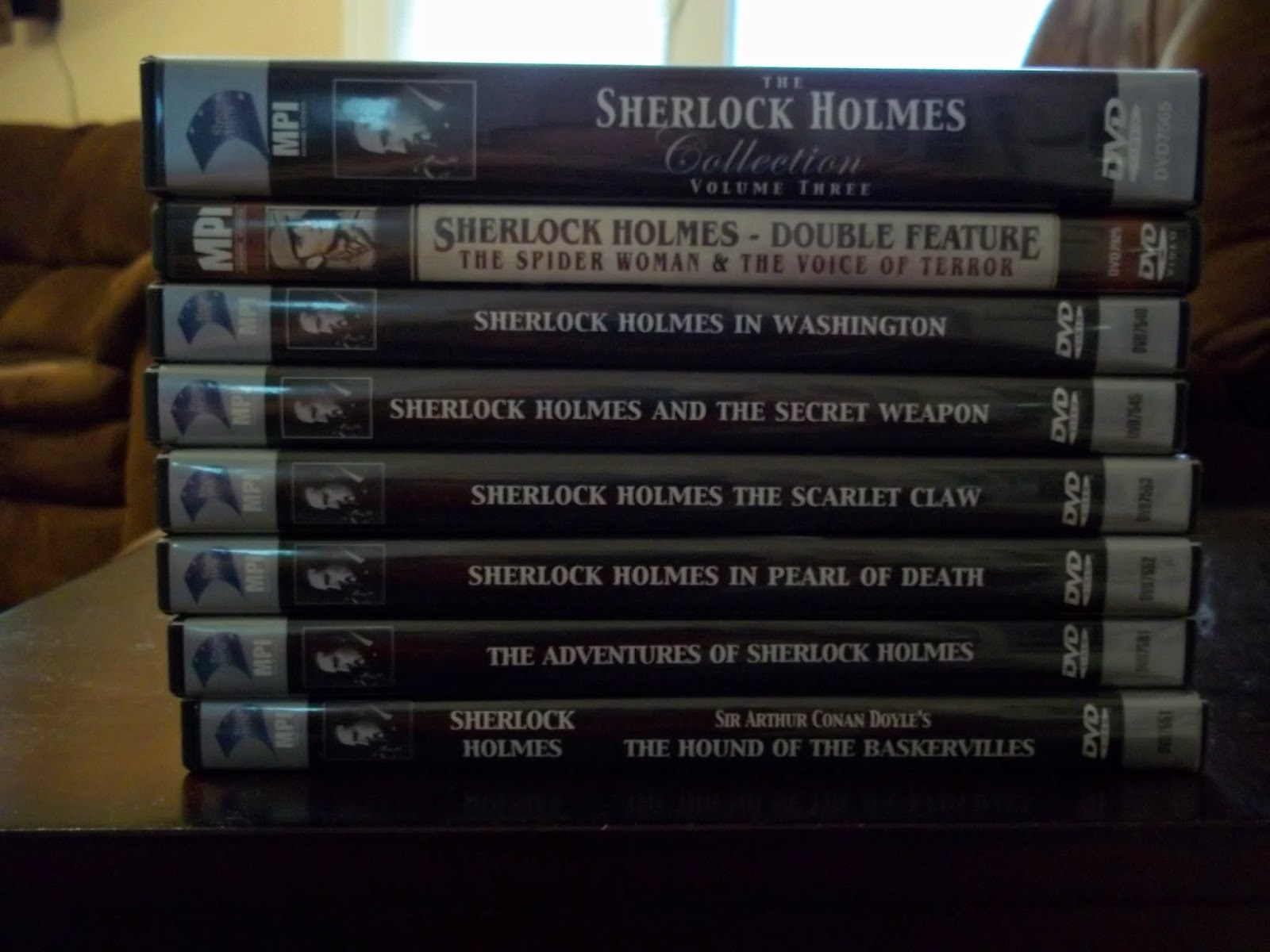 I have just about all of the Basil Rathbone Sherlock Holmes movies--I think the only one I don't have is HOUSE OF FEAR. (If anyone out there would like to send it to me, go right ahead.) 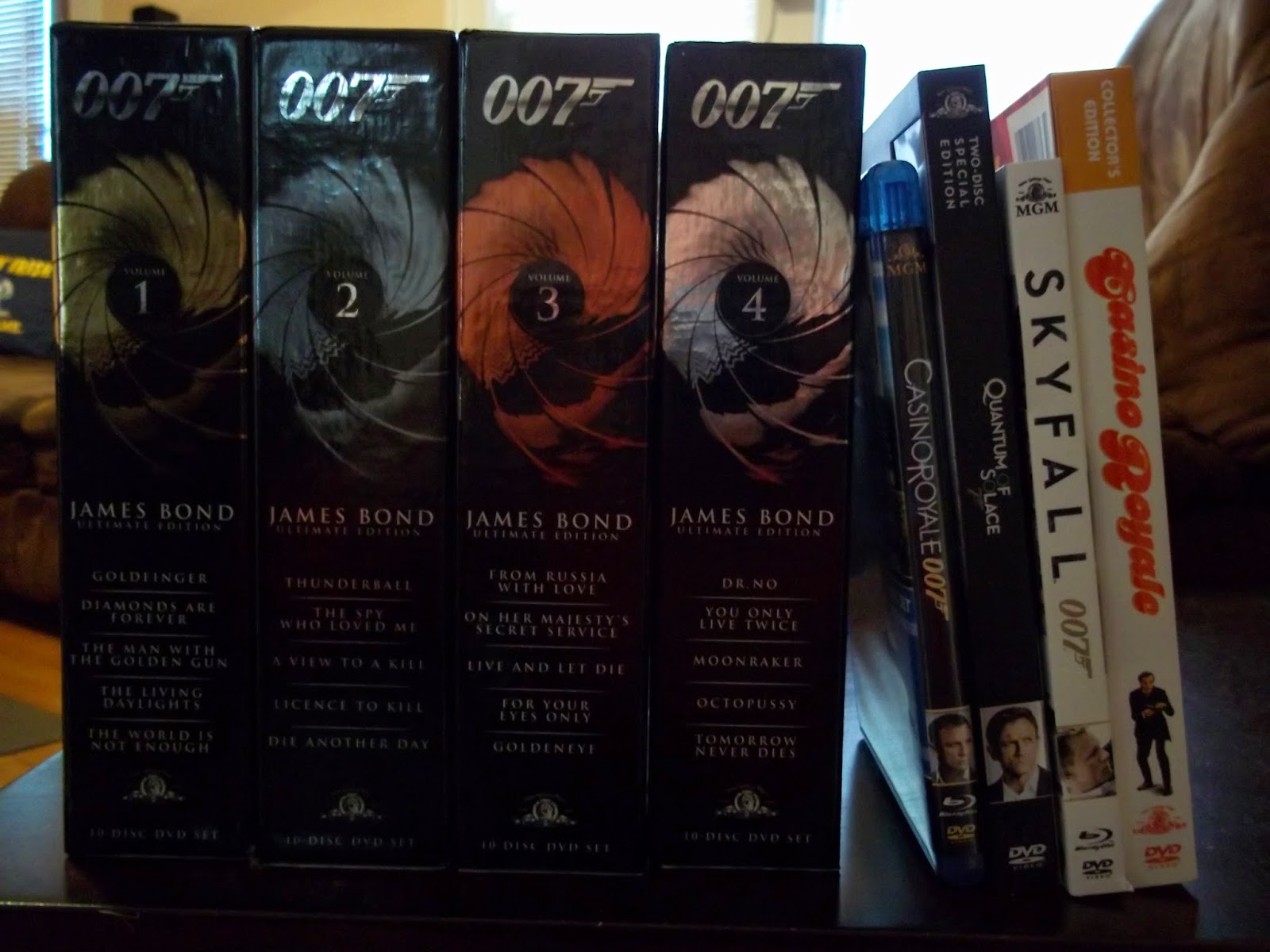 I have every single James Bond film on DVD--well, wait, I don't have NEVER SAY NEVER AGAIN. I haven't upgraded to Blu-ray on these yet. 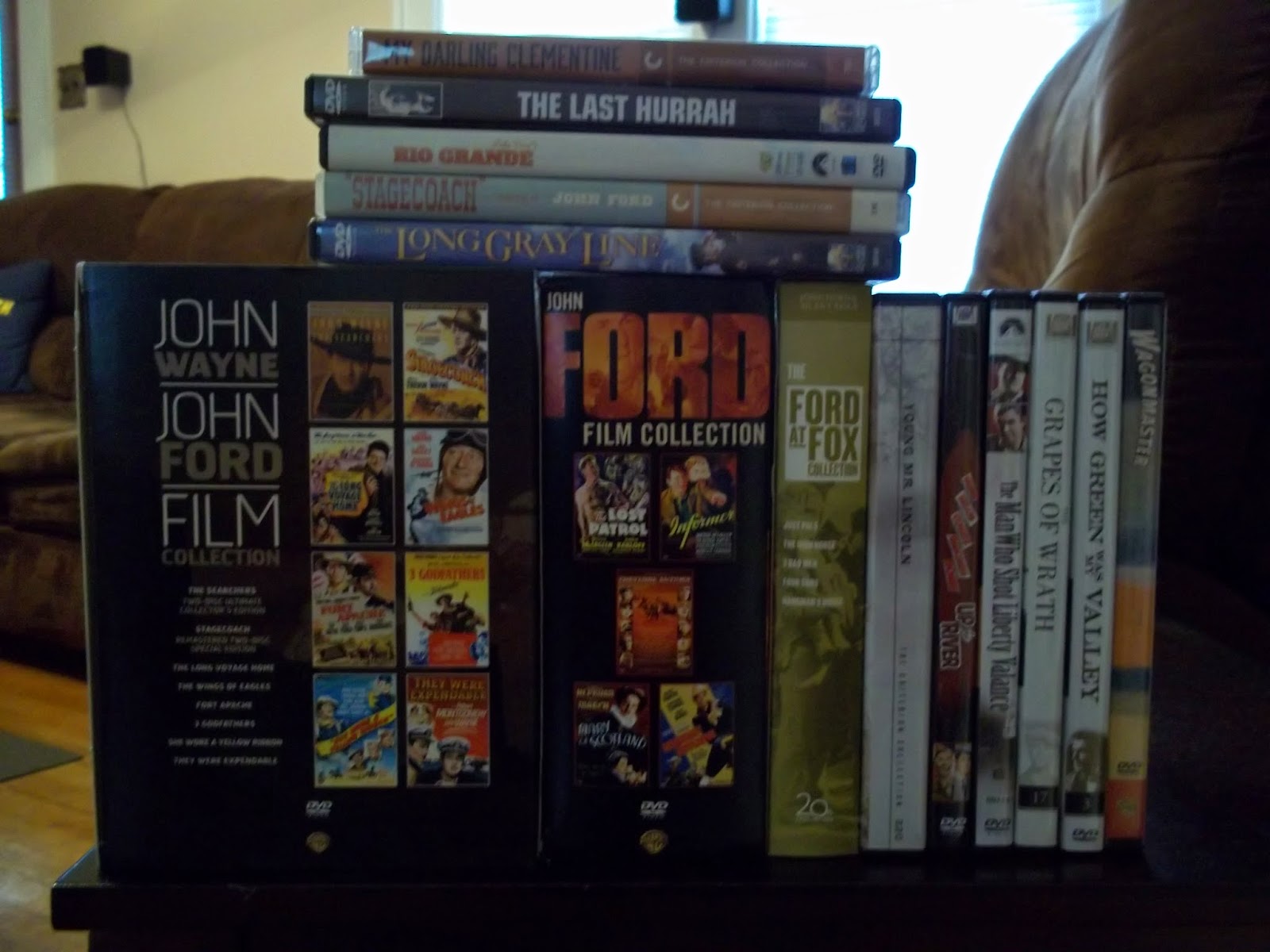 And this is my John Ford collection. I have a feeling I'm missing some of the Fords I own here as well.

This is just a taste of what I own....I haven't even gotten to the monster movies yet! (By the way, if you would like to have a better look at the photos, just click on the picture for a wider view.)
Posted by Dan Day, Jr. at 1:42 PM