The Russia In Classic Film Blogathon: THE SCARLET EMPRESS 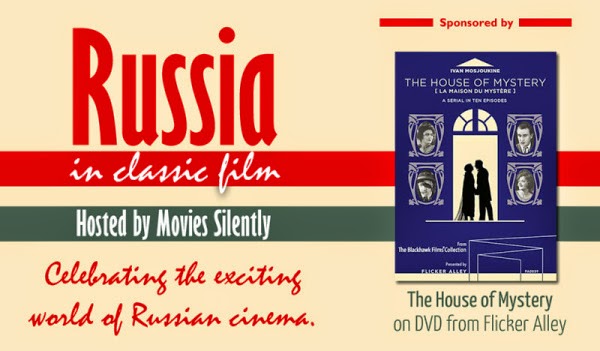 This is my contribution to the Russia In Classic Film Blogathon, hosted by Movies Silently, and sponsored by Flicker Alley. moviessilently.com

THE SCARLET EMPRESS (1934) is the sixth collaboration between director Josef von Sternberg and Marlene Dietrich. Pictorially stunning and undeniably strange, it represents the height of von Sternberg's baroque excesses. The film is more an excuse for von Sternberg to indulge himself than it is a true historical biography.

Catherine II of Russia (1729-1796) ruled as Empress for over 30 years. She remains one of the most famous females in world history, and her life has been dramatized in several movies and television programs. Like most great historical figures, what is known about her is more legend than fact. THE SCARLET EMPRESS gets the bare outline of her life correct, but it should not be taken as a accurate account of her times. 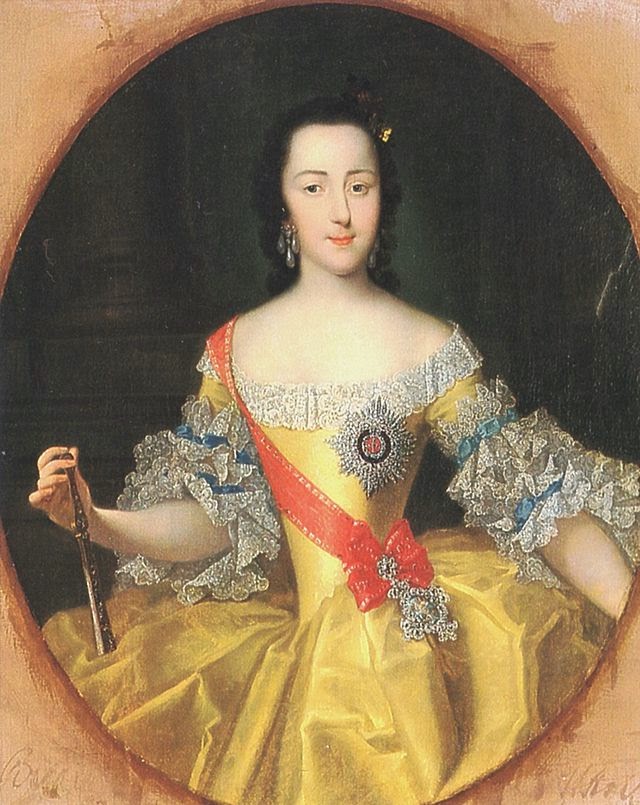 A portrait of the real Catherine, around the time of her wedding


Actually the title of this film is a bit of a misnomer, as Catherine does not become ruler of Russia till the very end of the story. The movie begins with a very young Prussian Princess, Sophia Frederica, being read stories of Russian history by a member of her family's household. (The young Sophia is played by Marlene Dietrich's real-life daughter, Maria.) The gruesome tales of Russia's dark past are depicted in a visual montage which includes tortures and executions, and even flashes of nudity. The montage doesn't last very long, but it is still rather intense, even for Pre-Code 1934 Hollywood. The montage sets up the film's depiction of Russia as a backward, dangerous land of violence and mystery. The man telling Sophia about the terrors is played by none other than Edward Van Sloan, veteran of many Universal monster movies.

Van Sloan's appearance is one of the many instances of the film's Gothic horror sensibility. When Sophia becomes a teenager, she is informed that she will be wed to the Grand Duke Peter, the heir to the Russian throne. Sophia and her mother must make an arduous journey to Russia, accompanied by the dashing Count Alexei (John Lodge), an emissary of that country. Sophia is attracted to Alexei, but  she wants to remain loyal to her betrothed, especially after Alexei tells her that Peter is the most handsome man in the land.

Upon their arrival at the Imperial Palace, Sophia and her mother are introduced to the Empress Elizabeth (Louise Dresser). Sophia asks to meet her future husband, and she finds that he is a grinning half-wit who resembles a vicious Harpo Marx (Sam Jaffe steals the film in this role). The Empress Elizabeth changes Sophia's name to Catherine and orders her to produce a male heir.

The movie up to this point plays like a dark fairy tale--a beautiful Princess is taken off to a far-away land, where she is forced to marry a monstrous mate and live in a gloomy castle. The Imperial Palace of THE SCARLET EMPRESS is one of the most unusual settings in Classic Hollywood history. The place is filled with unsettling giant statuary, and the walls and doors (which appear to be fifteen feet high and fifteen feet wide) are festooned with bizarre religious iconography. The oppressive atmosphere of the Palace is a metaphor for the darkness of the Russian Empire, and it overshadows even the substantial beauty of Marlene Dietrich. 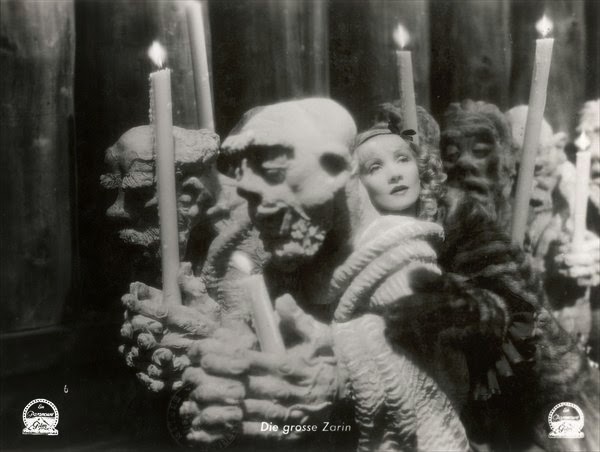 An example of the production design of THE SCARLET EMPRESS

The mad Peter is not interested in Catherine (he has a mistress of his own). The Empress Elizabeth, enraged that Catherine has not become pregnant yet, decides to show the young girl how to be a "true" Russian wife. The Empress orders Catherine's mother back to Prussia, and she orders Catherine around as if she were nothing but a servant. Count Alexei continues to try and woo Catherine, but the girl finds out that the Count is actually one of Empress Elizabeth's many lovers. This revelation changes Catherine--she decides to use her beauty to gain power in the Imperial Court. Catherine soon gives birth to a male heir, but Peter is not happy about the situation, since he and his wife have never consummated their marriage.

Before Catherine changes her attitude, Dietrich plays her as a wide-eyed child-like innocent with a girlish voice. After Catherine's "maturation", she becomes the sardonic and seductive Marlene that the audience is familiar with. The change is rather abrupt, but it serves the purpose of the story. The new Catherine uses her "special powers" to gain favor with various members of the military. After the Empress Elizabeth dies, Peter becomes Czar, and he starts a new reign of terror throughout Russia. He plans to kill Catherine, but she uses her connections with the army to stage a coup, and she replaces Peter as the leader of Russia.


The film ends with Catherine, dressed in a man's military uniform, standing next to a horse and wickedly smiling at her triumph. The scene seems to suggest that Catherine has become as mad as the Russians who she usurped to gain the throne. Whatever its meaning, the last scene serves as a fitting climax to what is one of the wildest films ever made during the Golden Age of Hollywood.

THE SCARLET EMPRESS, produced by Paramount, was not a critical or a financial success upon its release. That's not surprising, considering it is more of an art film than a mainstream-audience crowd-pleaser. One assumes that moviegoers of 1934, especially American ones, would have been scratching their heads at the delirious excesses of the film. THE SCARLET EMPRESS features more Gothic melodrama than sultry Marlene Dietrich romance (we only get to see Marlene's legs once during the whole movie). This isn't exactly a historical document either--von Sternberg portrays Russia as a doom-laden never-never land, steeped in intrigue and deep religious mysticism.

For those with an appreciation of cinema, THE SCARLET EMPRESS is a visual feast. The film contains many great set-pieces, including the wedding of Peter and Catherine. The event is staged in a cathedral so filled with priests, guests, and onlookers that one feels the characters can barely breathe. The resulting atmosphere is one of a sacrificial rite instead of a Royal wedding, with Catherine as a victim instead of a bride. The scene also has hundreds of candles in it--there's so many candles used in this movie that you have to wonder how one of the sets didn't wind up burning down during the production.

There's so many things to look at in the background of every scene of THE SCARLET EMPRESS that it demands multiple viewings. The costume budget must have been enormous--and of course Marlene Dietrich has several spectacular outfits. The production design is somewhat distracting, especially if one is watching this film for the first time. It doesn't help that von Sternberg stages his actors in front of something interesting in just about every scene--it's as if the director is saying, "Hey! Look at these sets!!"

And that's the biggest problem with THE SCARLET EMPRESS--it is all about attitude and atmosphere. The characters, and the settings, are so far removed from real life that the viewer doesn't really have any emotional attachment to what is going on. Marlene Dietrich is gorgeous as always, but you don't really care about her one way or the other. THE SCARLET EMPRESS is pure 100% eye candy. Josef von Sternberg would fit right in with 21st Century movie-making--all visual effects & action and no story.

THE SCARLET EMPRESS is available on DVD from Criterion. If any film demands to be remastered and released on Blu-ray, it is this one. The DVD looks very good, but one can only imagine how Bert Glennon's superb cinematography would appear on a nice Blu-ray transfer.

THE SCARLET EMPRESS is not a full biography of Catherine the Great--her rule as Empress is not even covered. Several legends surround Catherine to this day, and even with internet information it is hard to separate fact from fiction concerning Catherine's life. Like most movies about Russia, THE SCARLET EMPRESS presents the land, and its people, as wild, backward, and mysterious. That's how most Americans see Russia, even today. THE SCARLET EMPRESS may not be proper history, but it is pure cinematic splendor. 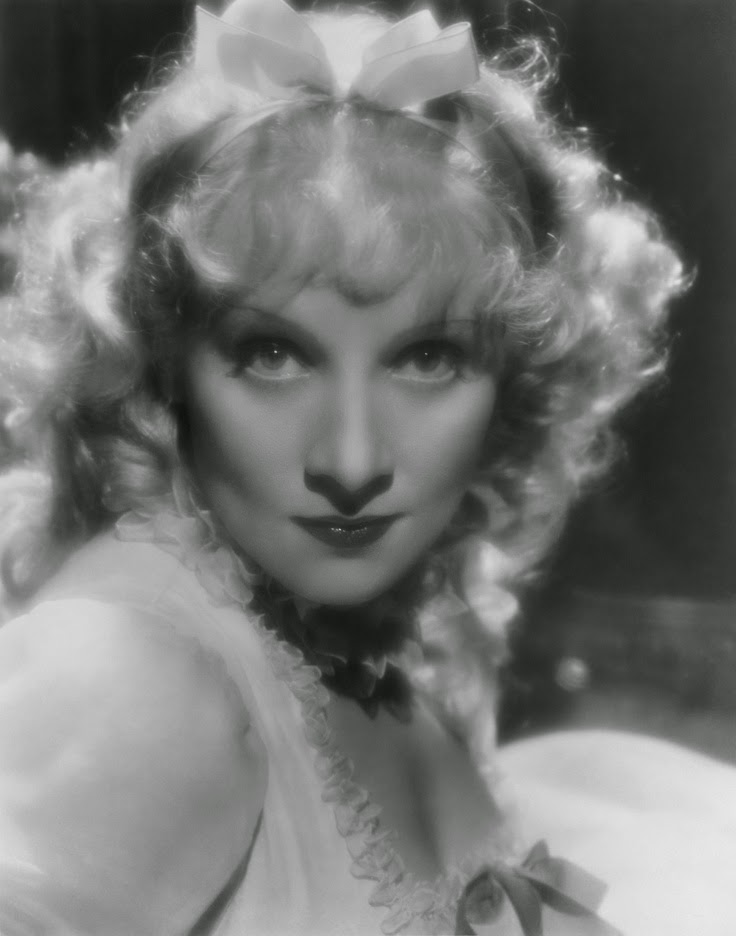 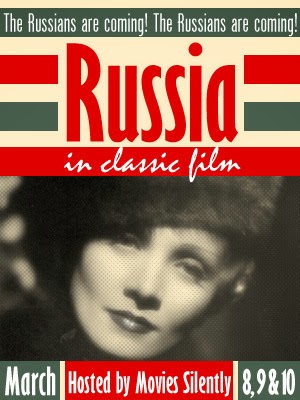