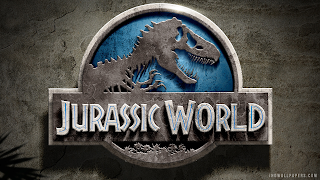 JURASSIC WORLD isn't so much a sequel to JURASSIC PARK as it is a 21st Century re-doing of Steven Spielberg's classic summer blockbuster. To fit modern film making sensibilities, the park is now "live", and there's tons of guests, and a lot more dinosaurs. Instead of having scientists as the main characters, JURASSIC WORLD has a ex-military man who is something of a "dinosaur whisperer", and a uptight ultra-professional career woman. The main threat in JURASSIC PARK was the historic T-Rex, and the main threat in the new movie is a genetically engineered "super" dinosaur.

JURASSIC WORLD does have several references to the original film, and people who love that movie (like I do) will appreciate and enjoy them. But JURASSIC WORLD takes the original premise and super-sizes it. It's very entertaining and well-made, but I don't think it is as legendary a film as JURASSIC PARK.

Paleontology and dinosaur fact take a back seat in JURASSIC WORLD. We find out that the evil corporation that owns the island wants to control the dinosaurs as military weapons--a sub-plot that seems a bit old-fashioned. The sense of wonder that was a major factor of JURASSIC PARK seems to be missing here. The movie's screenplay even references this--there's a conversation on how the park continually has to create "new" dinosaurs, just like regular theme parks have to create newer and bigger attractions to keep attendees from being bored.

If JURASSIC WORLD does anything, it validates Chris Pratt's standing as a new successful major leading man. There isn't really much to Pratt's role here--he's the cool tough guy--but Pratt has such an engaging and likable personality that he makes his character far more memorable than it should be.

As for Bryce Dallas Howard, I didn't really like her character (who is the director of the park) at all. The "uber-career woman who needs to be humanized" is a pretty obvious character arc. In JURASSIC PARK, the leading female role, as played by Laura Dern, was a multi-dimensional, intelligent, brave, and resourceful person. Here the script seems to be hinting that Howard's character needs a man and kids to make her whole--I guess we haven't really come a long way, baby.

This wouldn't be a JURASSIC movie without a couple kids being menaced by dinosaurs--and they're here, in the form of the park director's nephews. They're not annoying, but you have to wonder if they were shoehorned into the script.

Right now this movie is making a huge amount of money, and sequels have already been announced. I honestly don't know how far you can go with this premise. Every JURASSIC movie revolves around humans messing around with dinosaurs, the dinosaurs running a muck, and kids in danger. About the only way you can go forward with the series is to do what JURASSIC WORLD has done--make things even more bigger and the storyline more and more outlandish. Any JURASSIC sequel will make tons of money--but will they be better movies?

JURASSIC WORLD is worth seeing--it's a good time at the movies, and it is enjoyable. But it's kind of like fast food--I don't think it will stick in the memory the way JURASSIC PARK has. By the way, I would not recommend taking very little children to see this film.