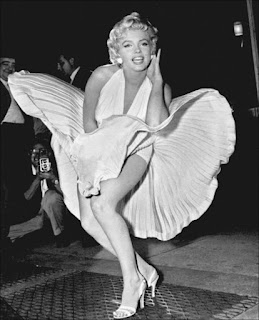 Last weekend my friend Will McKinley (not the assassinated President of the United States) asked on Twitter whether any other movie star than Marilyn Monroe has been featured on so much tacky merchandise. My reply was that Monroe also seems to have the most fans who have never actually watched most of her films. This led to a Twitter discussion concerning how some film stars are really better known as generic style icons, a discussion rather cogently summed up by a Will McKinley tweet:

There are classic film stars who are embraced by contemporary audiences purely as style icons, as if their work--the films--is incidental.

Marilyn Monroe is the poster girl (pun intended) for Will's tweet. Go into any store with a decent amount of merchandise--Target, Meijer, Wal-Mart, etc.--and you'll find something with Monroe's image slapped on it. Monroe is still considered the world's greatest modern sex symbol--but was she really a great movie star?

The most famous movie image of Marilyn Monroe is the above photograph. And that is not a still from the movie THE SEVEN YEAR ITCH, it is a picture taken during the making of a scene in the movie. I bet if you showed that photo to ten different people, most of them couldn't even tell you what movie it is from.

This isn't a post designed to knock Marilyn Monroe. I'm just pointing out that Monroe's fame is out of proportion with her actual film career--in my opinion. I think there are many actresses from the 1950s who were more talented than Monroe and made more interesting films, such as Kim Novak. Heck, I'd even include Dorothy Malone on that list. For whatever reason Marilyn Monroe is the definition of a great female movie star for those who are not film buffs (for the purposes of this blog post, those people will hereafter be defined as "civilians").

But Monroe isn't the only movie star who meets Will's criteria as a style icon. James Dean is another example. Dean only had three major film roles before his early death, and he still is on more merchandise than most of the young leading men of today. There's that famous photo of Dean taken during the movie GIANT showing Dean sitting in a car wearing a cowboy hat and his feet propped up. I have to wonder, for those that have a copy or a poster of that image...have that actually sat through almost four hours of GIANT? (I've never been able to.) I have to say that it appears to me that the Dean cult is fading a bit, and I think the reason for that is so many of those who worshiped Dean in the 1950s and 1960s are starting to pass away.

Humphrey Bogart is another who fits the style icon criteria. Now Bogart had a magnificent screen career, and he was far more talented an actor than Monroe or Dean. But to all the "civilians" out there, he's the cool-looking guy smoking a cigarette and wearing a fedora and a trench coat. In most of his movies he didn't wear those things, but that is how the general public perceives him. Because of that, Bogart's great talent--and his great body of film work--have been watered down to a instantly recognizable (and generic) image.

I believe that John Wayne also fits the style icon definition to a certain extent. But what is funny about all the Wayne merchandise is that it is almost always centered around "old" John Wayne--the John Wayne from the late 1960s and early 1970s. I've never really understood why so many "civilians" like the old John Wayne from that period better than the period when Duke was making some of the most famous films of all time. I think a lot of that has to do with the fact that Wayne's movies from his "old man" period are shown on television constantly. It's kind of sad, though, to think that a lot of people believe Wayne's persona is defined by a movie like CAHILL--U.S. MARSHAL.

Audrey Hepburn is someone who is now becoming defined by her "style" rather than her complete movie career. In the last couple years I've noticed a huge growth in Audrey Hepburn merchandise--and almost all of it is centered around her role in BREAKFAST AT TIFFANY'S. Once again, I have to ask the folks that buy the Audrey stuff--have you actually seen BREAKFAST AT TIFFANY'S? I mean, that movie doesn't really hold up that well today, and it has some strange stuff in it, like Buddy Ebsen's warmup for Jed Clampett and Mickey Rooney's "comic" Oriental.

It is interesting how performers such as Monroe, Dean, Bogart, and Wayne are considered by "civilians" to be the generic definition of a classic movie star. Usually what the "civilians" think they see--or appreciate--in those performers is very different that what their personal and professional lives turned out to be. If you go into any restaurant that has a pseudo-nostalgic interior decoration, the quartet of performers I just mentioned will be represented in some way--either individually or all together.

When I see someone wearing an image from that quartet, or showing an image from that quartet in their homes....and I find out that the person is not a major film buff, I kind of feel the way I do when I see someone wearing a jersey or a hat of a certain sports team, and finding out that person is not really a fan of the team. My feeling is "What's the point??"

I know that there will be those reading this who will say that I sound like a pompous #OldMovieWierdo (a hashtag invented by Will McKinley, by the way), but if you are going to go to the trouble of buying merchandise with some one's face on it, and it is someone you never personally knew, or even met, shouldn't there be more of a reason to buy it than "He/she was attractive and famous"? I'm not expecting everyone to be an obsessive film nerd like me, but it would be nice if those who extol the virtues of stars like Monroe, Dean, etc., actually knew something about them other than the basic facts (which most of the time wind up being nothing more than urban legends).

When you get right down to it, every movie star is a style icon in one way or another--that's part of the role of a movie star. But when the image becomes more famous than the star's actual career--I think that diminishes the star, rather than making them iconic.
Posted by Dan Day, Jr. at 10:25 AM